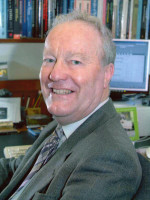 Fairly recently, two announcements concerning astrophysical observations appeared. The first from NASA mentioned the fact that the Voyager 1 spacecraft had detected a 100-fold increase in the intensity of high-energy electrons from elsewhere in the galaxy diffusing into our solar system from outside; the other revealed that a new all-sky map showed the magnetic fields of the Milky Way with the highest precision and proceeded to point out that the origin of galactic magnetic fields remains unknown despite intensive research, although it seemingly assumed that they are constructed via dynamo processes, such as are said to occur in the interiors of the Earth and the Sun. Here it is pointed out that plasma cosmology/electric universe theory can, and does, offer viable solutions to these and other supposed problems faced by orthodox cosmology.

On 5th December, NASA announced that its Voyager 1 spacecraft had entered a new region between our solar system and interstellar space. All the details may be viewed at

In this announcement, one of the more interesting comments is that “Voyager has detected a 100-fold increase in the intensity of high-energy electrons from elsewhere in the galaxy diffusing into our solar system from outside”. This comment is of interest because, apart from the word ‘diffusing’, it describes what the electrical model of our universe expects in the virtual cathode region of the solar discharge boundary.

Also, on 6th December, it was revealed that a new all-sky map shows the magnetic fields of the Milky Way with the highest precision

It was claimed that the origin of galactic magnetic fields remains unknown despite intensive research, although it was seemingly assumed that they are constructed via dynamo processes such as are said to occur – in violation of Cowling’s well-known theorem incidentally – in the interiors of the Earth and the Sun.

Some years ago, in an entirely different context, Sir Winston Churchill advised people to learn from the lessons of history and, in the present context, it might seem appropriate to follow this advice in astrophysics. Hence, in this spirit, it might be noted that, following the introduction of Newton’s mechanical ideas, work still proceeded apace investigating electromagnetic phenomena and this continued at least into the earlier years of the twentieth century, as is evidenced by the contents of J. J. Thomson’s book Electricity and Matter [1]. However, this book provides but one example to illustrate the very real emphasis on work involving the effects of the electric and magnetic fields, work which, incidentally, constantly sought an explanation for the concept of mass in terms of those forces. However, after those early years of the century, the emphasis seems to have shifted to explanations of phenomena purely in terms of gravitational effects. Considering that it is accepted that much of the matter in the universe is in the form of plasma, this seems a retrograde step. One may only speculate as to why the emphasis of much scientific research changed in this way. However, thanks to people like Birkeland, Alfvén and, more recently, Peratt, work in the areas of electromagnetism and plasma physics has continued.

The work on plasmas and other electromagnetic phenomena has inspired people to examine astronomical phenomena in these terms and this has resulted in the so-called Electric Universe idea as expounded, for example, in the books The Electric Universe [2] and The Electric Sky [3]. Reading through this material makes one immediately aware that just like accepted theory the electric universe ideas are supported by computer modelling, but it is also able to draw on parallels between astronomical phenomena and plasma phenomena observed in the laboratory. Admittedly, drawing such parallels involves scaling up tremendously but assuming this possible is little different from assuming that laws seemingly applicable here on the Earth are also applicable in the Solar System and, indeed, throughout the universe. At least visually, some of the phenomena observed in the laboratory are very like what is observed by some of the most powerful of telescopes. Electric currents in plasma naturally form filaments due to the so-called ‘pinch effect’ of the induced magnetic field. Electromagnetic interactions cause these filaments to rotate about one another to form a helical ‘Birkeland Current’ filament pair and this is very much the structure seen in the Double Helix nebula near the galactic centre; again, the Hubble image of the planetary nebula NGC6751 looks remarkably like the view down the barrel of a plasma focus device. Examples such as these prove nothing but might awaken people to the possibility of alternative explanations for at least some astronomical phenomena.

Much of the laboratory work originated with the work of Kristian Birkeland more than one hundred years ago. It was during his Arctic expeditions at the end of the 19th century that the first magnetic field measurements were made of the Earth’s polar regions. His findings also indicated the likelihood that the auroras were produced by charged particles originating in the Sun and guided by the Earth’s magnetic field. Birkeland, though, was an experimentalist and is still known for his Terrella experiments carried out in a near vacuum and in which he used a magnetised metallic sphere to represent the Sun or a planet and subjected it to electrical discharges. By this means, he was able to produce scaled down auroral-type displays as well as analogues of other astronomical phenomena. These claims, however, were only vindicated finally by satellite measurements in the 1960’s and 70’s. To that point in time, his experimental and observational achievements had tended to be overshadowed by the purely theoretical predictions and explanations of the geophysicist, Sydney Chapman. Powerful mathematics seems to have held sway over the more expected techniques of physics – experimentation and observation, with mathematics a mere tool to be used when necessary. This is not to decry Chapman’s work but to emphasise the overwhelming importance of the physics when investigating natural phenomena.

Birkeland also showed experimentally that electric currents tend to flow along filaments shaped by current induced magnetic fields. Of course, this confirmed observations of Ampère that indicated that two parallel currents flowing in wires experience a long range attractive magnetic force that brings them closer together. However, as plasma currents come closer together, they are free to rotate about each other. Such action generates a short range repulsive magnetic force which keeps the filaments separated so that they are, in effect, insulated from each other and able to maintain their separate identities. The end effect is for them to appear like a twisted rope and it is this configuration which is termed a ‘Birkeland current’. Satellites orbiting above the auroras in the 60’s and 70’s were able to detect a movement of ions, indicating that electric currents were present. Later missions found quasi-steady electric fields above the auroras following the magnetic field lines, thus lending some credence to Birkeland’s claim of the existence of an electric circuit between the earth and the Sun.

However, the so-called Electric Universe is really just an hypothesis, a new way of interpreting known data by using both new and well-established knowledge relating to electricity and plasma. It should be emphasised immediately that, in this new interpretation, gravity still has a role to play but it is a secondary one since the electric force is so much more powerful. A major point to be stressed from the outset is that, in this interpretation of astronomical phenomena, scientists are able to call on evidence from laboratory based experiments to help form and support suggested explanations for a wide variety of phenomena. It has been found that, as explained in more detail in the above-mentioned books, a plasma in a laboratory is a good model for providing possible explanations for many recently observed astronomical phenomena which, in several cases, have puzzled astronomers seeking explanations via more usual routes. This is not to say that gravity is ignored and regarded as irrelevant; rather, the possible effects of the electromagnetic force on astronomical phenomena are investigated while still recognising the importance of gravitational effects. In the electric universe, the gravitational systems of galaxies, stars, moons and planets are felt to have their origins in the proven ability of electricity to generate both structure and rotation in plasma. It is felt further that the force of gravity assumes importance only as the electromagnetic forces approach equilibrium. As has been noted already, great consternation has been caused in astronomical circles by the realisation that gravity, as presently understood, cannot explain much that is observed if the amount of mass available is as now felt to be present. Hence, instead of positing the existence of ‘dark matter’ or following the path of modifying Newton’s well-tried law of gravitation significantly, it is suggested here that the effects of the electromagnetic force be examined to see if, in conjunction with orthodox ideas on gravity, these puzzling observations can be explained. However, returning to the realisation that much of the matter permeating the Universe is in the form of plasma, it might be remembered that these clouds of plasma respond to the well-known laws of Maxwell. Also, as pointed out by Scott in his book [3], another law, formulated by Lorentz, does help explain the galactic speeds alluded to earlier. This law states that:

a moving charged particle’s momentum (speed or direction) can be changed by application of either an electric field or a magnetic field or both.

This seems a highly likely contributory factor, at least, causing galaxies to rotate as they are perceived to do but would indicate, contrary to the accepted view, that gravity has less to do with things than has been thought. However, it should be noted that nowhere is it being suggested that Newton’s law of gravitation is in error; it is simply being suggested that, in deep space where everything swims in a sea of plasma, the Maxwell – Lorentz electromagnetic forces dominate over those of gravity.

It might be remembered also that the Lorentz force alluded to here changes a charged particle’s momentum and that change is directly proportional to the strength of the magnetic field through which the particle is moving. Further, the strength of a magnetic field produced by an electric current is inversely proportional to the distance from the current but the gravitational force between stars is inversely proportional to the square of the distance. This well-known difference between the two forces could lie at the heart of the problem of the galactic rotation curves; certainly it seems an avenue worth exploring further, especially considering the fact that more and more space missions are indicating that electromagnetic forces are distributed more widely throughout space and are, of course, many orders of magnitude stronger than gravitational forces.

As well as a great many laboratory experiments being performed to establish plasma properties [4] , it has been shown also, using the Maxwell and Lorentz equations, that streams of charged particles, such as are found in the intergalactic plasma, will evolve into the familiar galactic shapes under the influence of electromagnetic forces. The results fit extremely well with the observed velocity profiles in the galaxies and all this with no recourse to missing mass. Much of this simulation work has been carried out by Anthony Peratt and is reported in various issues of the IEEE Transactions on Plasma Science.