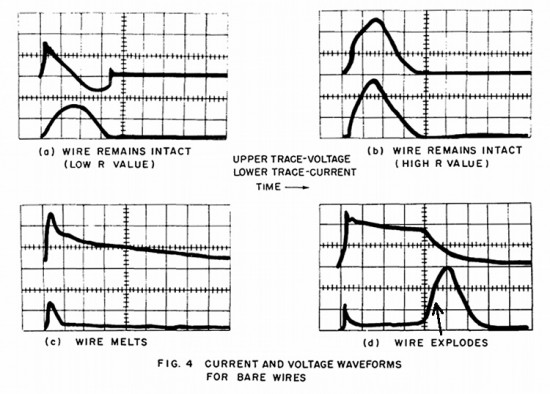 In a plasma circuit, current disruption is often caused by the DL becoming unstable. When that occurs, the entire inductive energy of the circuit is released in the DL. This can cause the DL to explode, resulting in extremely large voltage drops across the expanding DL and dissipation of prodigious amounts of energy, ultimately as heat and radiation as accelerated particles interact with other matter. This behavior will occur under a constant magnetic field. The field plays no part in the explosion. 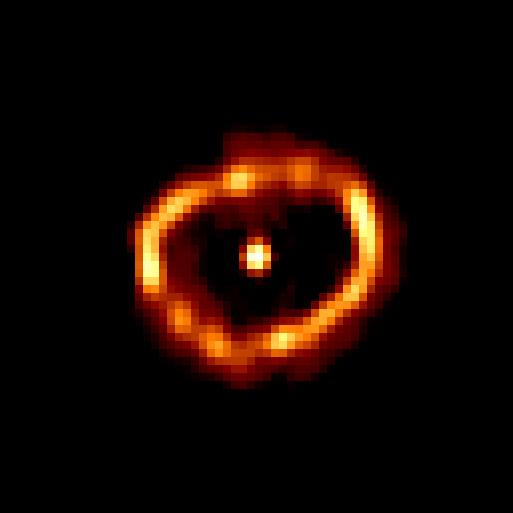 If the underlying current is still present after the explosion, then the cycle can repeat indefinitely. A DL forms, the current increases, the DL explodes with consequent emission of large amounts of radiation, the current starts to build up again, and a new DL forms.

It is obvious that this type of behavior cannot be described using field-based models. Current-based models are essential in order to capture this level of complexity.

The energy from an inductive circuit can also be released by explosive expansion of a loop of current due to the forces generated by the loop current itself. We have already seen how an axial current causes a pinching magnetic force. The opposite situation is a loop current which generates an axial magnetic field. In this case, the resulting I × B force is radially outwards.

If the outward pressure is not balanced by other forces, then the current loop itself will expand. In a metal conductor, the balancing force is provided internally by the metal lattice structure itself. In a plasma, there may be insufficient restraint, especially if the inductive energy of the circuit is being released in a short period due to collapse of a DL in the circuit.

This can result in an explosion of the current loop, such as is often seen in solar Coronal Mass Ejections (CME), where a loop of current rapidly expands away from the surface of the Sun. This simple explanation based on known electrical behavior contrasts with the Gravity Model, which invokes “magnetic reconnection” of lines of magnetic force. As magnetic lines of force do not exist in a physical sense any more than lines of latitude do, it is hard to see how they can ‘break’ and ‘reconnect’ and release energy. 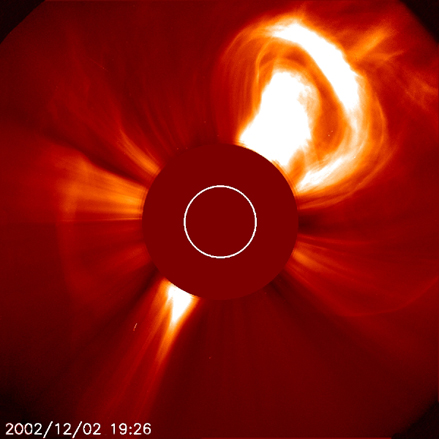 Filamentary currents are subject to a pinch force, as we have seen. However the simple pinch is itself unstable in a number of circumstances. If the pinch force increases and causes a contraction, this results in a further increase in the pinch force. The current filament can become so constricted that it forms into a series of bulges and constrictions like a string of sausages. 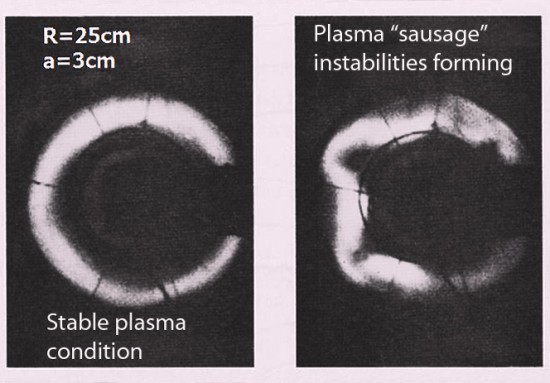 Photo of kink or "sausage" instability in one of the earliest plasma z-pinch devices, a Pyrex tube used by the AEI team at Aldermaston, UK, circa 1951/52 —public domain

If the axial current is strong enough, then the pinches can eventually collapse completely. In this case, the axial current is diverted into a ring current in the pinched zones, and donut-shaped magnetic plasmoids develop along the line of the filament. If matter has already been concentrated into the filament then this matter will be distributed along the line of the field-aligned current like pearls on a string. This could explain many linear alignments of bodies in space. 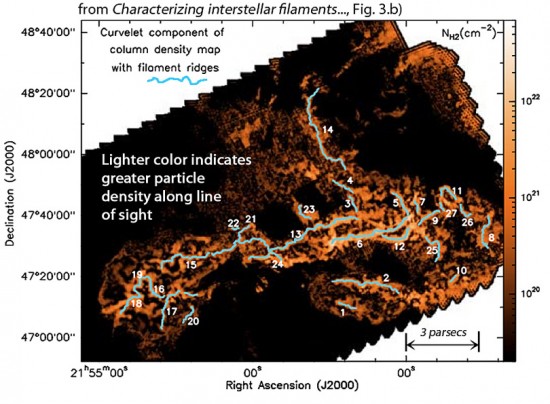 Credit: FIgure 3.b) from "Characterizing interstellar filaments with Herschel in IC 5146", Astronomy and Astrophysics Letter to the Editor, 529, L6 (2011)" by D. Arzoumanian et al., with explanatory notes added

The figure above has overlaid blue “ridge lines” along the lines of greatest filament density as seen in infrared wavelengths in this region.  A survey of the 27 filament segments showed that the characteristic filament width is ~ 0.1 parsec (1/3 light year) regardless of length. Star forming areas and protostellar “cores” were found preferentially situated along the ridge line areas in these interstellar filaments.

The authors noted that “if large scale turbulence provides a plausible mechanism for forming the filaments, the fact that prestellar cores form in gravitationally unstable filaments suggests that gravity is a major driver in the subsequent evolution of the filaments.” The EU approach notes that many plasma instabilities observed in space have also been created in plasma labs on Earth, but mention of of such mechanisms are seldom considered in the explanatory mechanisms presented in the peer-reviewed science press.

Another form of instability is the kink instability. This occurs most often in Birkeland Currents, where the current is aligned with the external magnetic field. The pinch then develops a strong helical mode. The effect is to offset the current cylinder relative to the field direction. This can appear as a kink in the current when viewed from the appropriate angle. 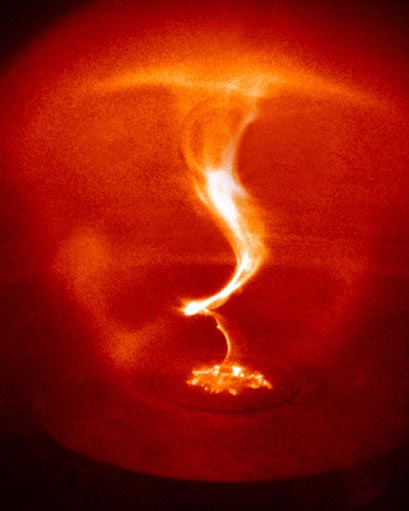 Plasma physicist Paul Bellan, with his grad students at CalTech are researching plasma instabilities in order to get a better understanding of the powerful phenomena observed on the Sun.  For a short video (several frames representing 16.5 microseconds of evolution) of one of the lab experiments involving the formation of a plasma instability, view here, as referenced in his and grad student Anna Moser’s recent paper in Nature: Magnetic reconnection from a multiscale instability cascade.

Recent research by Anthony Peratt as reported in the IEEE journals and other academic institutions has identified a series of very high energy plasma discharges which now bear his name.  Here is a representative paper by Peratt and Van Der Sluijs.

The Peratt Instabilities are modes of plasma discharge which adopt definite forms and which, despite their name, can remain stable for periods of time long enough to observe them. In some respects, they are like DLs, which are dynamic ‘instabilities’ that can remain static in location whilst involving rapid particle motions.

The Peratt Instabilities often take the form of a columnar plasma discharge which is surrounded by stacked plasma toroids. The top and bottom toroids can evolve into cup and bell shapes. The edges of the toroids often warp upwards or downwards. The number of toroids can vary between three and around nine and can resemble anything from chalices to ladders. Various other forms exist as well, depending on the nature of the plasma and the currents in it.

Peratt’s research into plasma phenomena at many scales has led him to suggest that it may be likely that rock art created in relatively recent history may be recordings of the sightings of a particular form of plasma discharge with attendant characteristic instability forms and shapes, as outlined in his graphically stunning IEEE paper, Characteristics for the Occurrence of a High-Current Z-Pinch Aurora as Recorded in Antiquity, IEEE Transactions on Plasma Science, Vol. 31, No. 6, December 2003.

The point to be made here is that none of these forms of plasma instabilities could possibly be predicted by an analysis based on magnetic fields, yet particle-in-cell computer simulations do yield the same results. Once again we see that plasma behavior is often too complicated to be described by magnetohydrodynamic, or MHD, fluid equations. It is necessary to base the analysis on the movements of particles, that is, a current-based solution.

Further, plasma instabilities may be valid mechanisms in explaining many of the complex interactions that result in stars and planetary systems, as well as the energetic phenomena observed on and around stars themselves.