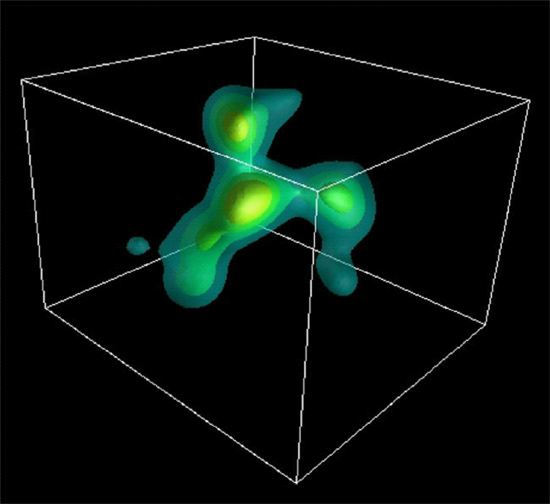 Immense clouds of ionized plasma as large as galaxies have been seen in deep space.

A recent press release from the European Southern Observatory (ESO) discusses a vast cloud of gas and dust originally discovered in 2000, conventionally measured to be over 300,000 light years in diameter and over 11 billion light years distant. Located in the constellation Aquarius, the great “blob” is known as LAB-1, for “Lyman-Alpha Blob 1.”

Why the name Lyman-Alpha Blob? What does Lyman-Alpha mean? Quantum physics postulates that a hydrogen atom’s electron orbit must abide by its principal quantum number. Mathematical calculations use n = 1 for the smallest orbital radius, n = 2 for the next quantized orbital step, n = 3, and so on. As mentioned, those orbital radii must rise and fall in discrete jumps.

Also, since electrons are negatively charged, they are attracted to protons by their binding energy. Each “n” orbit’s binding energy is expressed in electron volts. The closer to a hydrogen atom’s nucleus, the greater the binding energy. As an electron jumps down from a higher binding energy orbit to a lower one, it emits light in the ultraviolet range. The photo emissions from the n2 to n1 jump correspond to 121.6 nanometers. This frequency band is known as “Lyman-alpha” radiation, named after Theodore Lyman.

According to ESO, LAB-1 might be shining in the 121.6 nanometer frequency because cool gas is heated when gravity pulls it toward the center of the blob. It is also thought that there might be dynamic galaxies inside the blob, lighting it up by their highly energetic processes: black holes or star formation, for instance. In a recent analysis of light coming from LAB-1 the galaxy theory appears to win out. The polarized light coming from LAB-1 is the reason that ESO astronomers have adopted that theory.

The research team found a ring of polarized light coming from the center of the blob. It is not considered possible for compressed gas heating up as it falls into the blob to produce polarized light. However, if ultraviolet radiation were emitted from active energy sources within LAB-1, then the light would become polarized before it was scattered by the gas.

One of the principal tenets of Electric Universe theory is that electricity flowing through ionized gas, otherwise known as plasma, creates long electromagnetic filaments called Birkeland currents. Gas obeys the laws of kinetic motion, with molecules accelerated by “shock waves” or gravitational attraction. Plasma behaves according to the laws of electricity.

According to plasma physicists, the anisotropy of an ionized gas polarizes light shining through it. Polarized emissions are sometimes used to map ionized gas and magnetic fields in discrete sources. Another factor in the ESO observations that has not been considered is that some components of synchrotron radiation are circularly polarized.

The excitation frequency of a specific gas is a more correct model for LAB-1. Electricity passing through neon gas causes it to glow pale red. Other gases, such as oxygen, produce blue light, while heavier elements have their own colors. In the case of this cosmic blob, electrically excited hydrogen is producing an ultraviolet glare. Therefore, the title of the ESO press release, “Giant Space Blob Glows from Within,” is merely an assumption based on a gravity-only cosmology.