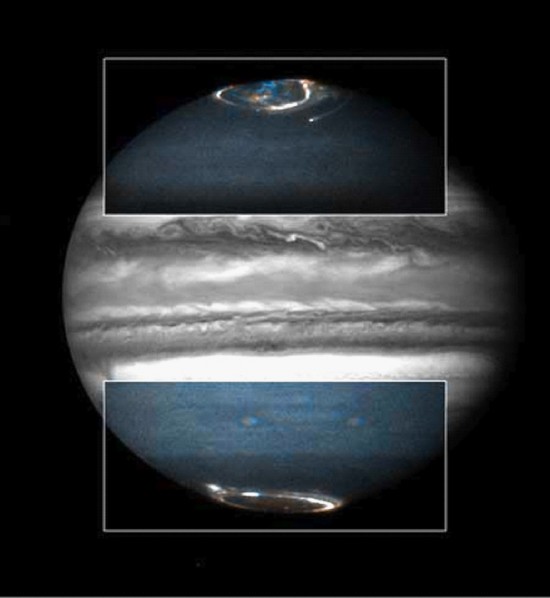 Several years ago, Picture of the Day articles discussed the so-called “volcanic” plumes erupting from Jupiter’s moon Io. It was argued that they are plasma discharges from the moon electrically connected to the giant planet. Some astronomers acknowledged the electrical connection when Io’s electromagnetic “footprint” was seen in Jupiter’s polar aurora. Later, it was found that all four of Jupiter’s large moons leave their imprints in the aurora.

When NASA launched the New Horizons spacecraft on a mission to study Pluto and Charon, they trained its cameras on Jupiter’s environment as it flew by in order to test their resolution. The “plumes” of Tvashtar, one of Io’s “volcanoes,” were seen by the itinerant spacecraft to be filamentary, indicating that they are corona arc discharges from the electric “hot spots” linking Io with Jupiter.

According to a recent press release, Jupiter’s aurorae are becoming more active, with bursts of extreme ultraviolet light detected. The research paper’s authors attribute the auroral flares to “…pulsed reconnections of the magnetic field at the planet’s dayside magnetopause…”

An electrical interaction between Jupiter and its moons means that they are charged bodies and are not electrically neutral. Jupiter exists in a dynamic electrical relationship to the Sun and it is now known that charged particles from the Sun power the planetary aurorae.

Earth possesses an electrically active magnetotail (or plasma tail), extending for millions of kilometers, always pointed away from the Sun. Streams of charged particles from the Sun (the solar wind) are captured by the magnetosphere, collecting in a plasma sheet within the magnetotail, where they are held together by Earth’s magnetic field. The same structural factors doubtless govern Jupiter’s magnetosphere.

The light bursts from Jupiter’s aurorae are said to be the result of “magnetic reconnection” events. The solar wind is said to “stretch” its magnetic field like a rubber band. When it “snaps back” the over-stretched magnetic field lines explode, converting some of the “magnetic energy” to heat and light.

As was discussed in a previous Picture of the Day, how that energy is released is not known. It seems, though, that space scientists are reversing cause (electric currents) and effect (magnetic fields). They downplay or deny the importance of electrical processes.

Retired Professor of Electrical Engineering Don Scott’s admonitions about magnetic reconnection should be kept in mind when the electromagnetic nature of aurorae, in general, is invoked:

1. Magnetic field lines are only convenient concepts, nothing more. They are not loci or contours of constant magnetic flux density (field strength). They just indicate the field’s direction. In regions where they are close together the field is stronger than where they are widely separated.

2. Therefore, sketching magnetic field lines can help us visualize the shape and strength of magnetic fields. They can help us to sketch the net result (vector sum) if and when two or more fields interact (are superimposed on each other).

3. We can only draw magnetic field lines (in cases not involving permanent ferromagnetic magnets) by considering the electric currents that create those fields.

4. Magnetic lines of force do not actually exist in three-dimensional space anymore than lines of latitude or longitude do.

5. If a field changes from one instant to another, we cannot use “streaming video” to watch a given line move and change shape. This is because we must redraw a complete set of lines at each instant. It isn’t the same line that has moved it is the field that has changed. The two sets of lines describe the field at those two different times.

6. Magnetic lines of force do not move any more than lines of longitude do. A determined unwillingness to recognize this fact has led to the idea that lines can move toward each other, touch, merge, and then release energy. This last notion, if applied to circles of longitude that come together and “merge” at Earth’s poles, could be proposed as causing gravitational energy releases at those locations.