Home Picture of the Day The Persistent Illusion 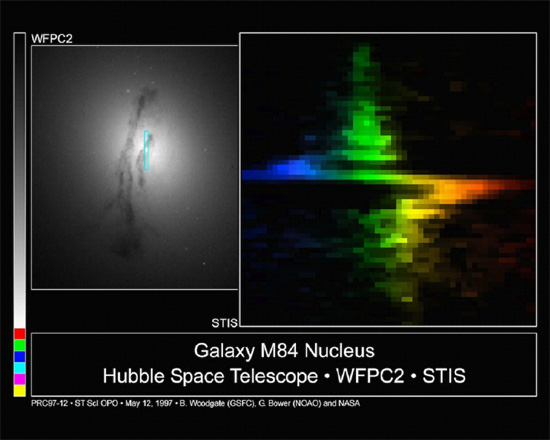 Spectrum of galaxy M84 supposedly indicating a black hole near its center.

Does the acceleration of gravity alone create high frequency radiation?

“Greatness is a zigzag streak of lightning in the brain.”
— Herbert Asquith, Prime Minister of the UK, 1908-1916

Black holes are theoretically required because velocity and gravity calculations of motions at the galactic center yield otherwise impossible results. Matter inside a black hole is said to be near infinite density, with intense gravitational attraction so great that not even light can escape. They are called “black” holes because they cannot be detected with optical telescopes. They are thought to inhabit over 90% of the galaxies in the Universe.

Previous Picture of the Day discussions about black holes determined that the descriptive terms used by astronomers rely on highly speculative explanations. Ambiguous labels such as space/time, singularities, infinite density and other ideas that are unreal, make what should be a scientific investigation into the nature of the Universe something of a nonsense.

According to a Hubble Space Telescope press release, galaxy M84 has provided NASA researchers with “proof” that it harbors a Super Massive Black Hole (SMBH) in its core greater than 300 million times the mass of our own Sun.

Using spectrographic data from the Hubble Space Telescope, astronomers measured the rotational velocity of dust and gas near the center of M84. Since the spectrogram’s s-shaped graph seems to show areas of more rapid rotation (up to 1,400,000 kilometers per hour), it was assumed that something very compact in the galaxy’s core must be exerting a powerful gravitational force.

Since galaxies are thought to be self-powered, gravity-driven engines, relying on kinetic energy to operate, the fact that they do not appear to supply enough energy to hold themselves together required space scientists to come up with two major adjustments to their cosmological theories: SMBHs and dark matter. In this case, a black hole’s near-infinite mathematical capacity to accelerate matter is brought into play.

X-rays and other high frequency radiation in space, no matter the source, are not easily generated by accelerating charge-neutral gas in gravity fields. It is far easier for charged particles (plasma) accelerated by electric fields to shine in all frequencies: extreme ultraviolet, X-rays, and even gamma rays.

In a galactic circuit, electric power flows inward along the spiral arms where it is concentrated and stored in the central plasmoid. When the plasmoid reaches a threshold density, it must decay and discharge, along the galaxy’s spin axis. This process can be demonstrated in the laboratory using a plasma focus device.

The discharge creates neutrons, heavy ions, and electrons jetting out from the nucleus. Electromagnetic forces confine the jet to thin filaments that remain coherent for thousands of light-years. The jet usually ends in radio lobes on either side of the galaxy, which radiate in radio frequencies.

The cosmic Birkeland currents that supply energy to galactic plasmoids also provide rotational energy by spinning around one another. Electromagnetism concentrates electric currents that generate magnetic fields, increasing current confinement forces, which increases the magnetic field, and so on. When those forces act on the galactic scale, they might be perceived in the unphysical way of black holes.