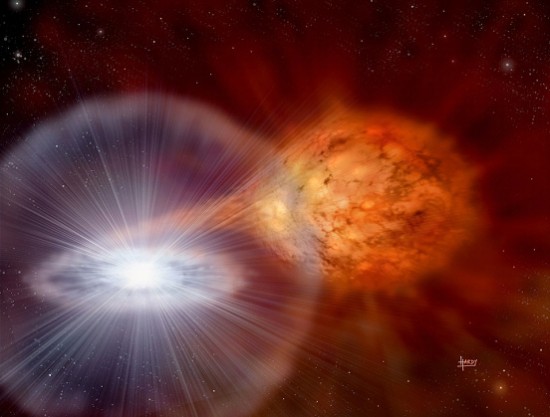 Stellar explosions might not be what has commonly been assumed.

On January 6, 2003 the U.S. Air Force Research Laboratory Solar Mass Ejection Imager (SMEI) was launched from Vandenberg Air Force Base onboard the Coriolis satellite. SMEI was designed to detect coronal mass ejections (CMEs) from the time they leave the Sun until they make earthfall. It does so by analyzing sunlight Thomson-scattered from heliospheric electrons.

According to a recent press release, since the SMEI views the entire sky every 102 minutes, and starlight must be subtracted from their datasets, the research team constantly makes detailed maps of stellar brightness. While visiting the University of San Diego, Rebekah Hounsell, a graduate student at Liverpool’s John Moores University in the U.K. identified four stars in those maps that fluctuated so rapidly in brightness that they were classified as “novae,” or exploding stars.

A nova explosion is thought to take place when a smaller white dwarf star in orbit around a larger companion draws matter onto its surface. Gravity compresses the gas and dust until, at a critical threshold the accreted material reaches fusion temperatures, whereupon it explodes, sending pulses of high-frequency light and powerful shock waves into space.

An important fact uncovered in the observations by astronomers at the University of San Diego was the rapid flickering of three nova explosions. Observations of stellar flaring were also noted. The pauses in brightening that were observed prompted Mike Bode, also of Liverpool’s John Moores University to remark: “The reality of this halt as found in all three of the fast-declining novae observed is a challenge to detailed models of the nova outburst.”

Why is this brightness variation so important? Nova explosions are supposed to be based on thermonuclear models of behavior, so there should be no starts or stops during the events. Nuclear explosions are not known to pause in their expansion. So what could be the cause of these anomalies? Is a rewrite of theory required?

Binary pairs of stars are common in the galaxy. More than half of all stars have one or more companions. Since stars are remote from one another, this suggests that something favors the formation of multiple stars. One possible electric mechanism is nova fissioning. A star’s electrical stress is concentrated on its surface. If the electrical flux is too great, the star might split into two stars. The surface area of two stars is greater than the surface area of one, so the new system is able to accept more electrical stress.

An electric current in plasma generates a magnetic field that will constrict the current flow. As has been pointed out in previous Picture of the Day articles, the constricted channel is known as a Bennett pinch, or z-pinch. Fluctuations can form double layers with large potential voltages between them. Electric forces in double layers can be much stronger than what gravity provides, while z-pinches can cause intermittent interruptions in current flow, which would account for the flickering.

Double layers can accelerate charged particles. Double layers can explode, releasing more energy than is locally present. It is this effect that is seen in stellar flares or so-called “novae.”

Fissioning to relieve electrical stress should present some common characteristics: nova-like brightening and dimming (flickering), a change in the star’s spectral type and surface chemical composition, the discovery of a binary companion, and the appearance of a nebular cloud.

Instead of revising outdated theories, Electric Universe proponents would like to see a complete revision of thinking where plasma and electric double-layers are given precedence.