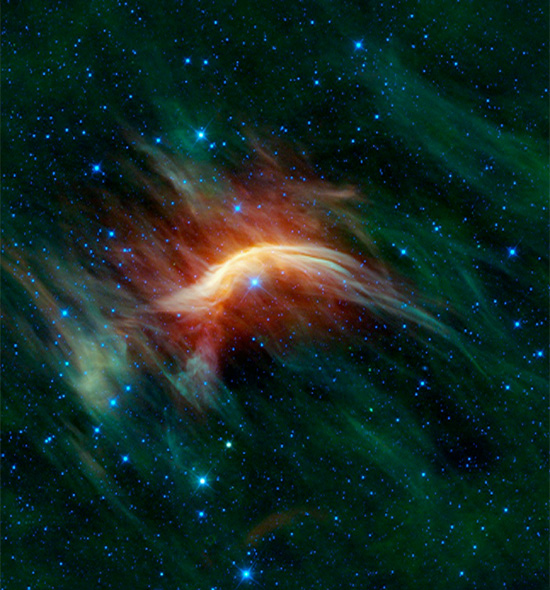 Space, it is said, is a vacuum. Since the best pumped vacuum on Earth reaches a 0.1 millimeter spacing between individual atoms, while, in comparison there is about one atom per cubic centimeter between stars, the label is not far off the mark

The Interstellar Medium (ISM), through which all stars move, consists of gas and dust composed of hydrogen and helium, with one-tenth of a micron dust grains. One micron equals one-millionth of a meter, so the dust is smaller than the wavelength of blue light (0.450 microns).

The ISM contains ionized particles, as well as neutral molecules. It is those electrons and positive ions that are critical to understanding the behavior of the ISM and how stars interact with it. Even though the ISM is extremely diffuse, since charge separation takes place in different regions weak electric fields can develop. Electric fields, no matter how weak, initiate electric currents.

According to a recent press release, astronomers using the Wide-field Infrared Survey Explorer (WISE) have located a star whose “…powerful winds push gas and dust out of its way and into what is called a bow shock.”

It is assumed that the star’s velocity compresses gas and dust in front of it as it flies through space because its “stellar wind” shoves gas and dust out of the way. The so-called “bow shock” heats up the ISM until it glows in the infrared frequencies WISE can see.

However, instead of treating the ISM like an inert medium, the Electric Universe model sees it as a magnetic, electrically charged material that is affected by the plasma sheaths around stars known as magnetospheres. Stellar plasma and the ISM are different plasmas, so they develop Langmuir plasma sheaths, or “double layers,” between them. Stars are where galactic electric discharges are focused, so the double layers form “virtual cathodes.”

Whenever electric discharges take place in plasma, the current flow is compressed inward by induced magnetic fields. This effect is known as a “z-pinch,” and is a foundational principle of Electric Universe theory. The compression can be so intense that plasma is squeezed down into solid particles. Indeed, stars and galaxies are thought to owe their existence to massive electric currents forming cosmic z-pinches in the vast clouds of plasma propelled through the Universe by larger electromagnetic fields.

When Voyager 1 experienced “events unlike any encountered before in the mission’s then 26-year history” as it approached the boundary between our own Sun and the ISM, physicist Wal Thornhill wrote that the spacecraft was penetrating a Langmuir plasma sheath that insulates the solar plasma from that in the ISM.