Home Picture of the Day Which Came First? 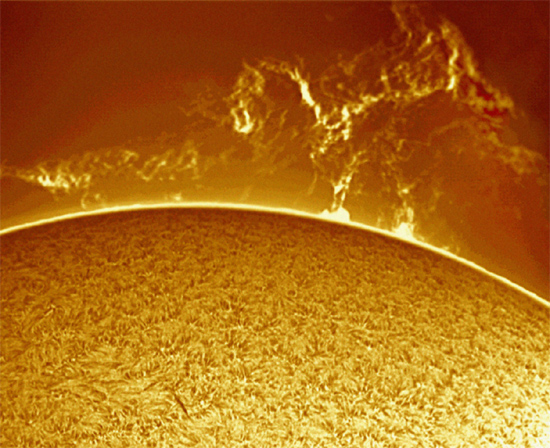 “Which came first, the chicken or the egg?” Asking this question always gets a chuckle from a group of kids who haven’t been asked that before. For adults, it confirms their conviction that unanswerable questions must be laughably ignored. For a farmer who gets into the egg business by purchasing a group of laying hens the answer is easy. “My chickens came first; that’s how I got my eggs.”

In 1908 Kristian Birkeland suggested that electrical flows from the Sun caused the auroral displays that we see. Astronomers such as Sidney Chapman ridiculed him. When it came to descriptions of solar coronal mass ejections and similar phenomena, all we have heard about for decades was that magnetic fields move around and twist – their “magnetic lines of force” come together, touch, and then fly apart carrying matter with them. This is called “Magnetic Reconnection.” Solar astronomers never mention electric currents. We are to believe that magnetic fields do it all by themselves, without help.

Recently things seem to have changed. A new paper entitled “A Current Filamentation Mechanism for Breaking Magnetic Field Lines During Reconnection” (9 June 2011 Vol. 474 Nature p. 187) mentions electric currents – but as an effect rather than a cause of magnetic field movements. The authors performed particle-in-cell simulations, not real laboratory experiments. Real lab experiments would have required them to set up electric currents to create the magnetic fields they wanted to measure. So they reported results of their computer simulations as experimental fact.

In the abstract of the paper mentioned above the authors state, “…we find that when the current layers that form during magnetic reconnection become too intense, they disintegrate and spread into a complex web of filaments that causes the rate of reconnection to increase abruptly.”

They have it backwards. They are oblivious to the fact that variations in the direction and strength of the causal electric currents are what produce the observed changes in the magnetic fields. Do they think that magnetic fields posses volition? Do magnetic fields just “take it into their heads” to move around and “reconnect”? What prompts their movement in the first place? What is the primal cause of the phenomenon they observe and call “magnetic reconnection”?

They report in this paper that changes in magnetic fields produce electric current filaments. It is the electric filaments that produce the magnetic fields and cause their movements. This paper offers us the first glimmer of hope that these ideas may be awakening in an embryonic state in the minds of solar astrophysicists.

At this point, they still have their eggs before their chickens. Maybe someday they will realize that. And get it straight.

Author of The Electric Sky