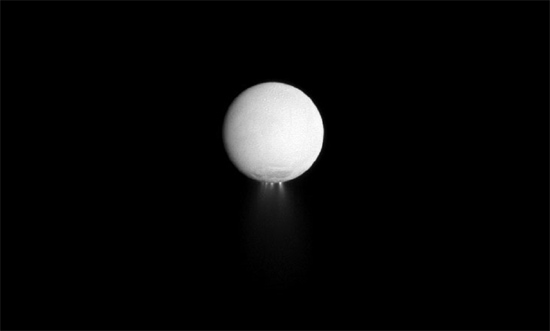 In a recent Picture of the Day, the so-called “bubbles” of magnetism supposedly found by the Voyager spacecraft at the boundary where the Sun’s heliosphere meets the ISM (interstellar medium) were explained as Langmuir sheaths, or electrically charged double layers in plasma. Since the bubbles are thought to be elongated, it was suggested that the electron flux variations detected by the twin Voyagers probably indicate filaments of electricity called Birkeland currents.

Similar electromagnetic structures are seen around Earth, on Venus, on the various gas giant planets, and within and surrounding galaxies. All of these phenomena share a common characteristic: they are all manifestations of electricity flowing through plasma.

Recent observations of Enceladus by the Cassini spacecraft in orbit around Saturn reveal that its electrically charged plumes are also bubbly with magnetic fields. Saturn’s “magnetic bubble” is its magnetosphere, inside of which Enceladus orbits. The interactions with Saturn are because the moon acts like a generator, its conducting plasma moving through Saturn’s magnetic field induces current flow.

An ultraviolet “footprint” of the electric circuit between them was seen in Saturn’s auroral oval during Cassini’s August 11, 2008 flyby. The onboard plasma sensors found ion and electron beams propagating from Saturn’s northern hemisphere. Their variability was puzzling to NASA scientists until time-variable emissions from Enceladus’ south polar vents were found to correspond with the auroral footprint’s brightness variations.

Consensus viewpoints assume that the Universe is electrically neutral, so evidence confirming electrically active plasma is said to be caused by localized phenomena no matter how improbable. Tidal “kneading,” “cryo-volcanoes,” and “geysers” erupting from underground chambers of liquid water are said to cause the activity seen on Enceladus, while electricity is ignored.

Planetary scientists persist in misinterpreting the “tiger stripes” on Enceladus as “vents,” channeling water to the surface. The vents are really incisions on the moon caused by traveling electric arcs. They are analogous to the v-shaped trenches seen on Jupiter’s moon Europa. They are often found in parallel and they cut across other channels. Such characteristics contradict the idea that they are a series of fractures.

It appears that Enceladus was gouged and torn, rather than cracked and broken. A giant auger seems to have cut across the surface, disregarding the prior topography: a sure sign that an electric arc was the active agent. The tiger stripes show parallelism not because they are open cracks but because filamentary electric currents flowing across a surface tend to align and follow the ambient magnetic field direction.

Electric Universe advocates propose that the rilles and hot pole are heated by electromagnetic induction, while the water vapor is electrically “machined” from them. A similar process occurs at the north pole of Enceladus, where the electric current returns to Saturn’s plasma sheath.