Home Picture of the Day Crumpled Space and Canceled Time 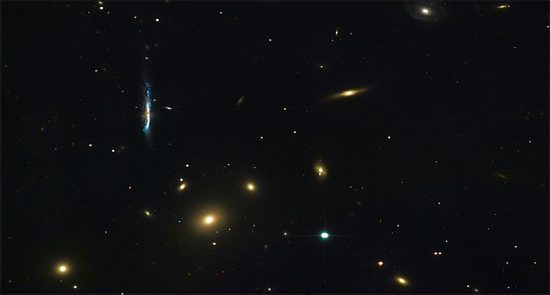 More news about black holes is increasing the distortion of reason.

According to a recent press release, two black holes with masses exceeding “9 billion times the mass of the Sun” have been detected. The supposed “event horizon” in NGC 3842 is said to be “seven times larger than Pluto’s orbit.”

Black holes are mathematical constructs based on an improper interpretation of some equations. Those formulae reify the existence of objects that are theorized to wrench space itself into a twisted pretzel, so that various calculations about velocity and mass yield impossible results. Inside the event horizon of a black hole, matter is said to occupy no volume, yet it retains a gravitational field so intense that not even light can escape, while time is said to slow to a crawl. Black holes are “black” because they cannot be seen.

Previous Picture of the Day articles determined that the terminology invented by astrophysicists relies on speculations derived from the aforementioned loose interpretations. Concepts of “space/time,” “multi-verses,” “singularities,” and other non-quantifiable ideas verge on the ironic, rather than on a realistic investigation into the nature of the Universe.

Black holes are thought to form when stars that are at least five times the Sun’s mass reach the end of their lives, after having exhausted their hydrogen fuel. As the standard model of stellar evolution speculates, those stars accumulate heavier atomic nuclei in their core fusion reactors, slowing the reaction, and making it impossible for them to push their outer surfaces away from their centers with radiative pressure. Gravity overcomes fusion, so the star’s gaseous envelope suddenly collapses, rebounding off the core in what astronomers call a “supernova explosion.”

Gravity is no longer hindered by a radiating core, so the core is is supposed to shrink under that force. As a result, the star disappears from normal space, compressing itself into a near infinitely dense mass with no geometry. A ghost of the star’s presence remains as an irresistible gravitational source that can continue to attract material into its hypothetical maw. That is how black holes are thought to grow.

There is no experimental evidence indicating matter can be compressed to almost infinite density. It is not clear to the consensus scientific community how stars form supernovae, because supernovae do not form spherical shells when they explode; they form glowing bipolar plasma formations like an hourglass. Also, no one knows precisely how a black hole gathers matter into an “accretion disk” and grows to billions of solar masses.

As we have noted in the past, Hannes Alfvén identified the “exploding double layer” as a new class of celestial object. It is double layers in space plasmas that form most of the unusual structures we see. Stellar explosions, jets, rings, and glowing clouds are all examples of electricity flowing through dusty plasma confined within Birkeland currents that stretch across the light years.

Electromagnetic compression zones (z-pinches) in plasma filaments form plasmoids that eventually evolve into stars and galaxies. Electricity is responsible for the birth of stars, and when the current density gets too high double layers in the circuit may catastrophically break the circuit and release the electromagnetic  energy stored in the local galactic circuit. The result is the stupendous outburst of a supernova.

In the electric star hypothesis, no concentrated gravity from hypothetical super-compacted objects and “singularities” is necessary. Classical “laws” of electromagnetism are more than able to create the phenomena we see, without recourse to the supernatural physics of supermassive black holes. Expulsion disks are common in such energetic systems rather than “accretion disks.”

Instead of black holes, galaxies possess plasmoids as their driving engines. Gamma ray (and X-ray) observations of our own galactic core reveal a plasma torus there. High frequency radiation from the plasmoid is similar to that from electrically excited stars. Prodigious electromagnetic energy from the galaxy is stored in the matter trapped in the compact plasmoid. The plasmoid therefore exhibits immense mass, derived from the well-known E = mc2 equivalence. So it is the gravity of the plasmoid that accelerates stars to the high speeds mistakenly attributed to an imaginary and unphysical black hole.