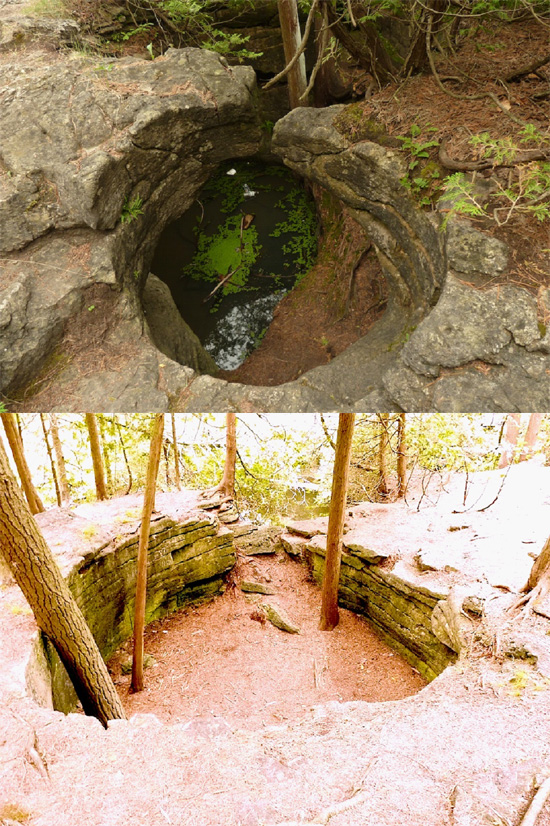 Did pieces of stone really carve these holes?

Rockwood Provincial Park lies alongside the Grand River in the Niagara Escarpment region of Canada. Numerous geological features are located in the park and all are attributed to glacial action as the sole creation mechanism. The two images above are classified as glacial potholes, and are but two examples of the more than thirty holes and arcs carved in rock in a small area of the park.

The 2011 park information guide has this to say about the glacial potholes concentrated in one small region of the park: “The potholes were created during the retreat of the glacier. Pieces of stone—mostly hard granite from the Canadian Shield—had been carried along by the glacier. They got caught up in fast-moving meltwater. They swirled in the whirlpools, ground away the softer limestone, and eventually left large round potholes in the rocks.”

At a cursory glance this sounds plausible for some of the holes. However, this explanation does not transfer very well to the other carved features in the vicinity. If one examines each carved pothole and arc and tries to imagine pieces of granite rolling around, carving out these nests, the explanation quickly fades into absurdity. The words “why”, “what”, “how” and “where” would be prominent in the mind while shaking one’s head.

The first question would be, has this process been witnessed first hand or is this just a hypothesis? The wording of the statement sounds like it is a hypothesis. I’ve never seen any references to concrete examples where this has happened or to any experiments that attempt to duplicate this process. Of course, the description of the process fails to mention how big the stones were. This would be a fairly straightforward experiment to attempt: get a cylindrical tank of water, put a slab of limestone in the bottom, drop in some stones of granite and spin the water for an extended period of time. I would be shocked if any grooves were carved into the limestone.

Assuming that some stones actually did get caught in a whirlpool, it’s doubtful that there would have been enough downward force to carve into the rock to such depths. For comparison, try using an ice auger to drill a hole into ice without pushing down on the handle of the augur; the augur tends to spin around on the surface without carving into the ice. Likewise, any stones in the whirlpool would just skip around on the surface of the limestone.

Even if they did carve a groove, how did the entire hole get excavated? The forces would be downwards (gravity), and radially outwards (centrifugal), none of the forces would be directed inwards to carve out the centre. Furthermore, with so many holes being bored out, why didn’t any stones get lodged in the irregularly shaped corners? Why are there irregularly shaped corners? Even more difficult to explain, why didn’t the stones roll away through the open-sided gaps that occur in many of the holes and move downstream or just off to the side of the stream.

Furthermore, water has the physical property of laminar flow, i.e., water flowing along a surface slows down closer to the surface. This would have the effect that the deeper the hole, the weaker the force and the less erosive. This would probably result in shallower concave holes, which are not found and would not produce the vertical walls that are common.

Anyone who has ever kayaked, canoed or just been anywhere near white water knows that eddies and whirlpools form for a reason; either convergent streams, rocks beneath the surface, a bend in the stream or some other obstruction. Eddies and whirlpools don’t just form on a whim. How did the whirlpools in Rockwood form? There is no evidence of any obstructions or converging or bending streams. Why were there so many whirlpools in this non-distinct location? There are currently no features in this area that would produce a single whirlpool, never mind a whole multitude of them.

If whirlpools were truly the power behind the erosion, then carving a large hole in the bottom of the stream would likely disrupt the flow of the stream, gradually affecting the location of the whirlpool. If this were the case, then why are the walls vertical rather than sloping, as the location of the whirlpool would likely move with the change in flow? What caused these alleged whirlpools to stay fixed in the same position and in such high numbers?

Even more perplexing, where the holes overlap, as in the picture above (upper), the arcs are completely independent of each other as if they were cut with a cookie cutter. Why wouldn’t stones smashing around a hole in close proximity to a neighbouring hole break or alter the neighbouring hole? Running through the area is a creek, the banks of which are a series of overlapping holes like a chain of overlapping craters, much like the crater chains on Mars.

Some of the arcs and holes have scalloped vertical walls, which are difficult to explain by rolling a group of stones around. One of these holes, pictured at the top of the page, bears a striking resemblance to Olympus Mons on Mars, but on a far different scale. Standard theory would scoff at a common cause for these two similar features, yet proponents of the Electric Universe theory have no troubles, since electrical discharges scale very well from microscopic to planetary features.

Wouldn’t a much simpler explanation for these “potholes” be erosion from a very large electrical discharge via an electric discharge machining mechanism that has been discussed many times before on these pages? Each aspect of every pothole or crater can be easily explained and is expected if this region recently experienced a massive electrical discharge.