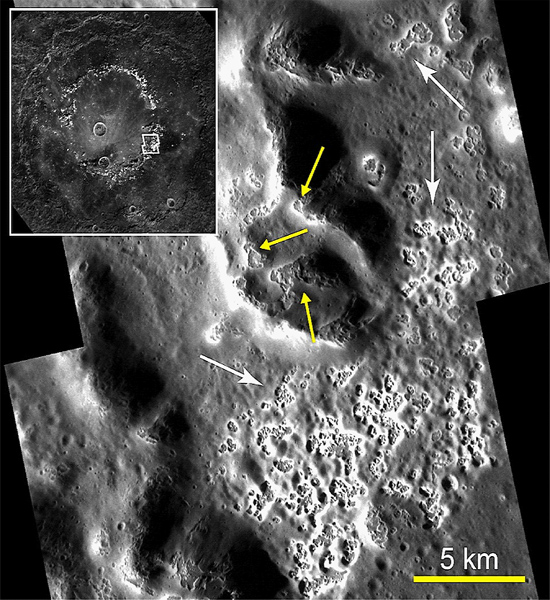 Data from the MESSENGER probe to Mercury continues to provide evidence for the Electric Universe theory.

The planet Mercury has no atmosphere and little in the way of a magnetic field, so it is bombarded by the full force of the Sun’s radiation. Since the Moon is also an airless world, with only traces of a magnetic field, perhaps explanations applicable to the Moon or Mars might help to explain Mercury’s features.

The recent image of Raditladi Basin is a case in point. The Moon is 3472 kilometers in diameter and Mercury is 4878 kilometers in diameter, their surfaces are almost identical in appearance. The lack of atmosphere and low gravity contribute to a lack of erosion on both bodies, but the various formations on both reveal a high level of congruency. The surfaces of the Moon and Mercury are also composed primarily of basalt, the most common mineral in the Solar System.

According to a recent press release, an “unexpected class of landform on Mercury” has been found, suggesting a “previously unrecognized geological process is responsible for its formation.” It is not surprising that the processes that create the topography in question remain puzzling to planetary scientists: the features are reminiscent of formations on the Moon, particularly the Ina Structure. Mars might also figure into the discussion when the hollowed out mounds on the flanks of Olympus Mons are considered.

“Small, shallow, irregularly shaped depressions that are often found in clusters,” could be a defining characteristic of electric spark machining on a conductive surface, rather than the remains of volcanic vents, or places where trapped subsurface gases have erupted under pressure. One key to their understanding might lie in the brightness of the ridges within the “hollows.”

On Venus, the bright tops of mountains were theorized to be due to something like St. Elmo’s fire playing across the peaks. Since plasma is highly reflective of radar light, and the surface of Venus was mapped using radar to penetrate the clouds, the conjecture seems logical considering Electric Universe ideas. Since MESSENGER is using a multi-spectral high resolution imaging system, the bright ridges are most likely due to chemical changes from intense plasma discharges.

When basalt is baked, it releases gases that cause it to turn from a dark color to a light color. It might be that electric arcs excavated the depressions with white hot ion beams, hardening and lightening the surface. Similar processes could also be responsible for the comparative formations on the Moon and Mars.

Mercury is believed to be almost 75% iron surrounded by a thin shell of silicon-rich rock. Conventional theories of planet formation have no explanation for such a configuration. If it formed in the same protoplanetary nebula as the rest of the Solar System, then the abundance of iron remains a mystery because the ratio of iron to silicon is opposite to the other rocky planets. Mercury is thought to have a molten core generating a magnetic field, but no one knows if it is working like Earth’s is supposed to work or if the field is part of the crust, like Mars. No one understands how a molten core exists on Mercury since the planet appears cold and dead. The molten interior should have cooled off eons ago.

As Electric Universe proponent Wal Thornhill wrote: “In Mercury’s case, its strong gravitational field for its size indicates a high level of internal electrical polarization. That means a high surface charge. So Mercury’s slowly rotating charge will produce a small magnetic field. Other effects will modify that field. For example, currents flow in the plasma above the surface and are induced in the surface of the planet. And there is remanent magnetism associated with old cosmic thunderbolt surface scars.”