Home Picture of the Day Gradualism Versus Catastrophism Part Two 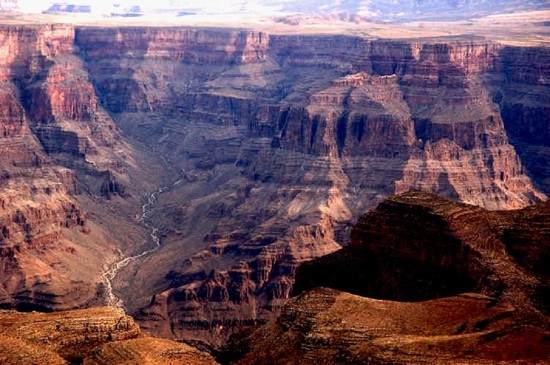 Layering through the Kaibab Plateau is visible in this image of the Grand Canyon.

Does the position of geologic strata determine age?

In part one of this article, a reference to laboratory experiments that falsify the consensus view of sediment deposition mentioned that fossil ages could not be reliably determined based on the so-called “geologic column.” The geologic column is defined as a series of depositional layers that form a chronological sequence. It is also called the “stratigraphical column.”

Considering the position of fossils in rock strata, the following sequence is generally accepted:

Thus, the extinction of the dinosaurs is said to have taken place over 65 million years ago. However, the popular notion that the geologic column represents vast periods of time is being questioned by a number of geologists who realize that it most likely results from a series of catastrophic events.

Nicolaus Steno is often said to be the father of geology. His “principle of superposition” influences geologists to this day, even though it was formulated in the late 1600s. In many ways it seems to be completely straight forward, but only now is it recognized that it was not based on experiments but on field observation.

In February 2000, Guy Berthault wrote a paper in which he described several experiments that analyzed the hydraulic processes involved with sedimentary layering. His conclusions were subsequently published in Lithology and Mineral Resources, Vol. 37, No. 5. Under conditions of constant flow rate and a continuous supply of particles, he discovered that a mixture of coarse and fine particles would separate into thin laminations.

Material flowing through a flume under simulated flood conditions created a downstream deposit that sorted into several horizontal strata that continued to build up on the advancing face. The unusual aspect to the deposition of particles is that each layer was composed of laminations younger than those farther back. Rather than top stratum being younger than the bottom, all strata were deposited simultaneously in a horizontal fashion. As the paper states: “Superposed strata are not, therefore, necessarily identical to successive sedimentary layers.”

Another problem with the superposed strata theory is speed of erosion. The current weathering rate for the continental shelves is thought to be six centimeters per thousand years. Therefore, in less than 10 million years today’s continental shelves will erode away. The difficulty with that assessment is that sediments hundreds of millions of years old are on top of all the continental shelves. How can this be when that material should have all washed away in the Cenozoic era?

Another problem with gradualism in geology is the radiometric dating of rocks. Rocks are typically dated using the principle of constant radioactive isotope decay rates and an assumption of the estimated original isotope ratios. The oldest rocks are dated using the uranium/lead half-life ratios.

When rocks form, they contain a certain percentage of elements. Zircon contains uranium and thorium atoms, but no lead. Therefore, the assumption is that all the lead in zircon must be radiogenic. This idea depends on a uniform, gradual process free of sudden alteration. If the decay rates of various elements can be altered by external influences, then the percentage formulae that indicate a sample’s age are unreliable.

“There has been in recent years the horrible realization that radiodecay rates are not as constant as previously thought, nor are they immune to environmental influences. And this could mean that the atomic clocks are reset during some global disaster, and events which brought the Mesozoic to a close may not be 65 million years ago but, rather, within the age and memory of man.” Fred Jueneman, FAIC, Industrial Research & Development, p.21, June 1982.

A foundation of Electric Universe theory is the flow of electricity through space and the catastrophic influence it had on planets and moons in the recent past. Whatever phenomenon it was, within the recorded history of humanity a great cataclysm engulfed the Earth. Canyons were blasted out, mountains raised, ocean basins shifted, and great swathes of plants, animals, and people obliterated in the blink of an eye.

Those enormous energies, the rearrangement of the topography, and the intense radiation make it impossible to assign any measure of antiquity. Repeated and rapid sedimentation that hardened to stone in mere minutes, fossilizing its burden of organic detritus, means that what is visible on the surface might be the same age as what lies beneath.