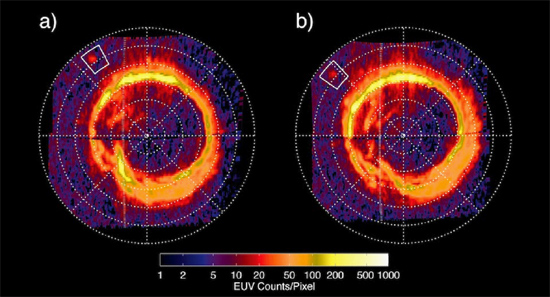 Saturn exhibits a circuit between Enceladus and its electrical environment.

One of the most surprising results of the Galileo space probe’s mission to Jupiter was the identification of electrical activity between several Jovian moons and their parent. So-called “volcanic” plumes were seen erupting from the moon Io. The plumes are the result of cathode arcs, electrically etching the surface and blasting sulfur dioxide “snow” up to 150 kilometers into space.

Io acts like an electrical generator as it travels through Jupiter’s plasmasphere, inducing over 400,000 volts across its diameter at more than three million amperes. That tremendous current flows along its magnetic field into the electric environment of Jupiter.

Electric Universe proponents argued at the time of Galileo’s discovery that plasma discharges from the moon, which is electrically connected to Jupiter, are contributing to the intense aurorae around the gas giant’s poles. Some astronomers even acknowledged that electrical connection when Io’s circuit pathway was seen in Jupiter’s polar aurora. Later, it was found that all four of Jupiter’s large moons also leave their imprints.

According to a recent publication, the same kind of activity has been found connecting the moon Enceladus with Saturn’s poles: an ultraviolet “footprint” in the auroral oval. During the August 11, 2008 flyby, Cassini’s plasma sensors found ion and electron beams propagating from Saturn’s northern hemisphere. Their variability was something of a puzzle until it was noted that time-variable emissions from Enceladus’ south polar vents could correspond with the footprint’s brightness variations in Saturn’s aurora.

Astronomers have suggested that the vapor plumes from Enceladus are due to Saturn’s gravity field “kneading” the moon as it orbits. The particles then flow as an electric current to Saturn. Since electricity does not flow in one direction the one-way connection cannot be correct, so how is the electricity moving between Enceladus and Saturn?

NASA scientists will continue to monitor the plumes from Enceladus to see if there is a definite connection between the two phenomena. Electric Universe advocates assume that the results will confirm the electrical exchanges between Saturn and its moon.

Conventional theories assume that the Universe is electrically neutral, so when observational evidence confirms electrically active plasma for instance, localized phenomena no matter how improbable are invoked. Tidal forces and “cryo-volcanoes” are presented as the cause for the activity seen on Enceladus and the evidence for electric circuits is ignored.