Home Picture of the Day Martians, Men and Machines 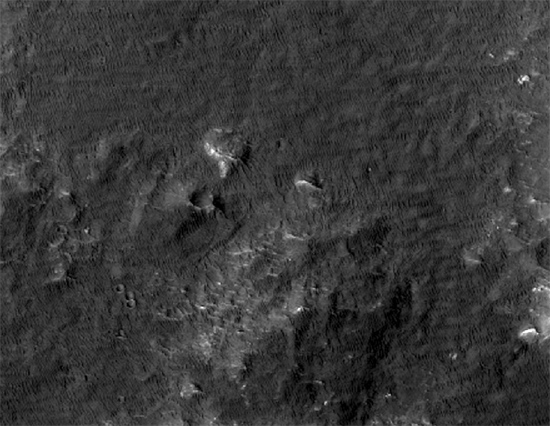 Is there, or has there ever been, life on the Red Planet? A new mission will try to find out.

On a morning between November 25 and December 18, 2011 NASA will launch the Mars Science Laboratory (MSL), otherwise known as “Curiosity.” The new rover owes its handle to naming contest winner Clara Ma from Lenexa, Kansas.

Curiosity is five times heavier than the Mars Exploration Rovers “Opportunity” and “Spirit,” with upgraded instrumentation, including a high definition stereo video camera. Additionally, a tunable laser spectrometer can identify a wide range of organic compounds, as well as determine the isotopes of different key elements.

The primary mission objective is for Curiosity to travel through the landscape within one of four landing sites, searching for life, or evidence of previous life, on Mars. The space program has been working on that project since the early 1970s when Viking 1 was launched from Cape Canaveral on August 20, 1975, followed one month later by Viking 2. On July 20, 1976 Viking 1 landed on Mars, preceding its twin by almost exactly six weeks.

The essential reason for the Viking landers was to look for the same things that the MSL is designed to look for. Viking 1 landed in the western portion of Chryse Planitia, while Viking 2 landed 6700 kilometers away in Utopia Planitia. Both landers analyzed soil samples in an attempt to locate respiratory byproducts, but nothing conclusive was found.

One could argue that any organic substances that might have been in reach of either Viking platform could have been incinerated when the descent engines blasted the landing area with superheated gases. To avoid this potential problem, Curiosity’s descent module is designed to hover over the surface, while the rover is lowered by an onboard crane. The module will then engage thrust and fly some distance away before crashing.

The air is 100 times thinner on Mars and averages 75 degrees colder than Earth. The environment appears to be bone dry, with only some suggestive experiments by the Phoenix lander to indicate the possible presence of water ice. Without the presence of water in the form of subsurface ice deposits, the chances of finding life are admitted by all concerned to be slim.

On Mars, deep channels and other structures are thought to be caused by water flowing on the surface, although it was “millions of years ago.” Chemicals that form in the presence of water on Earth are presumed to have formed on Mars by the same process. Despite the contradictory evidence of mineral deposits that would be destroyed by water, such as olivine, the flowing water hypothesis continues to guide theories of Martian areography.

In 1997, the Mars Global Surveyor (MGS) found outcrops of layered rock extending for thousands of kilometers. Hundreds more images uncovered rock layering in other locations. Since many of the layers are similar in thickness, NASA scientists conclude that the strata are sedimentary. They might have built-up in water and then been eroded by wind. For that reason, Curiosity’s landing sites are in areas that are extensively layered.

The active electrical forces that almost destroyed Mars at some time in the recent past are, of course, ignored by consensus science. Until electromagnetic forcefields, plasma discharges, and double layers are studied and understood by planetary scientists, no theory about Mars will be satisfactory.

Mars tells a story that includes powerful plasma discharges on a massive scale. Vast areas show signs of excavation down to six kilometers below the mean elevation. Some of the shattered rock was accelerated electrically into space; some fell back to the surface, where it was electrically sorted and deposited in hardened layers. Rather than water, it was probably lightning that layered Mars.

Thanks to Eric Frank Russell for inspiring the title.