We present the first in the Thunderbolts Project’s series of DVDs outlining David Talbott’s reconstruction of the ancient sky. Just a few thousand years ago a gathering of planets appeared as towering forms close to the earth, provoking spectacular electric discharge formations above our forebears. 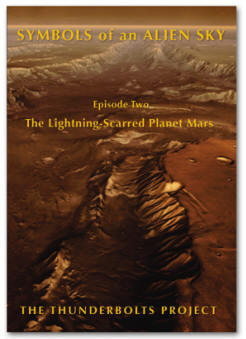 In this second episode of Symbols of an Alien Sky, The Lightning Scarred Planet, David Talbott takes the viewer on an odyssey across the surface of Mars. Exploring feature after feature of the planet, he finds that only electric arcs could produce the observed patterns. The high resolution images reveal massive channels and gouges, great mounds, and crater chains, none finding an explanation in traditional geology, but all matching the scars from electric discharge experiments in the laboratory.

As a scientific follow-up to episode one, it provides a definitive answer to a question posed by the reconstructed events in the first episode. Was Mars carved from pole to pole by intense interplanetary discharge? (Approximately 85 minutes)