The three plots below, provided by Don Scott, show the energy, electric field strength, and charge density as a function of radial distance from the Sun’s surface. Scott draws our attention to the fact that the three plots provide a stunning match to those of a PNP transistor, while explaining the extreme variability of the solar wind as well:

“In a transistor, the amplitude of the collector current (analogous to the drift of +ions in the solar wind toward the right) is easily controlled by raising and lowering the difference between the base and emitter voltages…If the Sun’s voltage were to decrease slightly – say, because of an excessive flow of outgoing +ions – the voltage rise from point a to b in the energy diagram would increase in height and so reduce the solar wind (both the inward electron flow and the outward +ion flow) in a negative feedback effect….The transistor-like mechanism described above is certainly capable of causing these phenomena.  The fusion model is at a complete loss to explain them.  Transistor ‘cutoff’ is a process that is used in all digital circuits.” 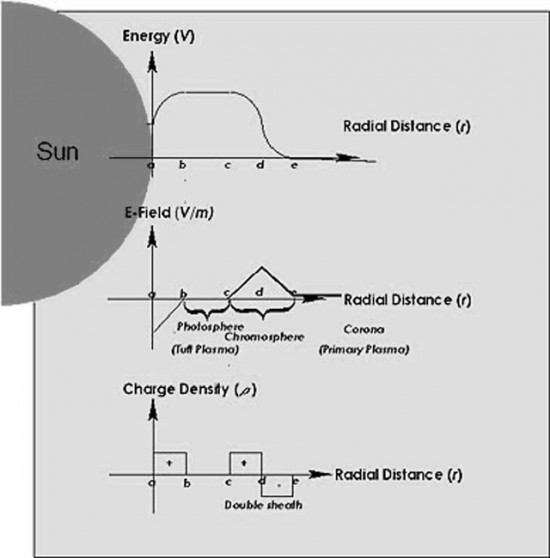 Fig. 12. Energy, electric field strength, and charge density as a function of radial distance from the Sun's surface. Illustration from Don Scott’s book The Electric Sky.

Could it really be that simple? The answer is yes, because electric fields are the most efficient means of accelerating charged particles, and they are the only known way to accelerate charged particles up to the higher speeds of the solar wind.

One puzzle of the Sun is the “rice grain” appearance of its photosphere (below right), which gave rise to the phrase “photospheric granulation.” Scientists now believe that each granule is the top of a “convection cell” because the opaque gases of the Sun, in the nuclear fusion model, need a mechanism for slowly transferring internal heat to the surface. The “granulation” must therefore be the “boiling gases” forced upward by million degree temperatures beneath the surface.

Immediately, problems arise with this interpretation. The gas density in the photosphere diminishes rapidly with height so that convection there should be completely turbulent. Instead, the granules seem to quietly appear, grow brighter for some minutes, then fade. As one proponent of standard theory concedes, “Convection remains the outstanding unsolved problem in photospheric physics.” [21]

The statement confirms what Ralph Juergens wrote years earlier: “…Photospheric granulation is explainable in terms of convection only if we disregard what we know about convection. Surely the cellular structure is not to be expected.” Juergens proposed instead that “a [photospheric] granule may be viewed as a relatively dense, highly luminous, secondary plasma that springs into being in the embrace of a thinner, less luminous, primary plasma. …We are led directly to ask whether the granules might not be akin to certain highly luminous tufts of discharge plasma variously described in the literature as anode glows, anode tufts, and anode arcs.” 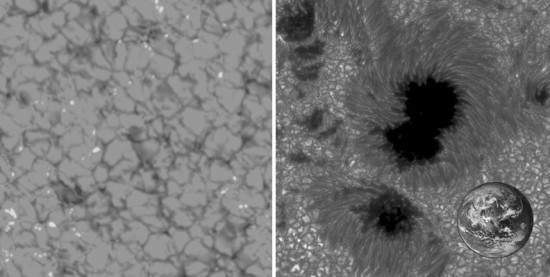 Anode tufts appear as bright spots above an anode surface and increase in number as the voltage and current are increased.

Sunspots underscore the profound enigmas for the thermonuclear model. Their darkness, structure, and behavior have required great ingenuity in attempts to explain them. As seen in the Sunspot image in Fig. 14, the margins of its dark regions reveal that the granules are the tops of rope-like structures rising to the photospheric surface. The thermonuclear model identifies these structures as the “convection currents” that the model requires. 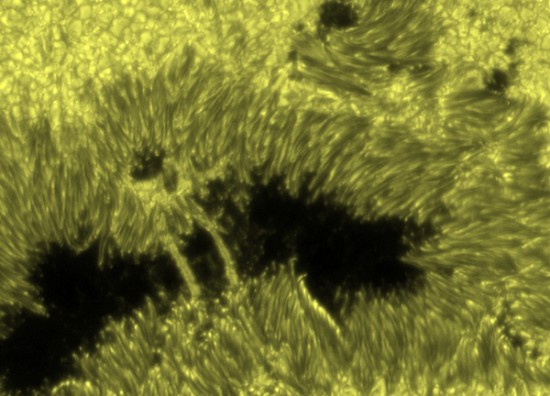 Fig. 14. The bridges seen reaching across this sunspot highlight the role of charge redistribution in a highly active region just beneath the surface. Credit: Swedish Solar Observatory.

In convection, hot gases move upward and cool. But the penumbral ropes reveal quite the opposite. From their base, as the plasma rushes upward, they grow hotter. And that’s only the beginning of the dilemma.

Seen below in Fig. 15 are two images of a single sunspot. The top image in visible light, shows the vortex-like penumbral ropes, as they reach the surface of the photosphere. To see the forces actually driving and configuring the sunspot penumbra one must step back (or “up”) from the visible surface and follow the paths of the filamentary structures into the chromosphere above the surface. As seen in the bottom image in ultraviolet light, the “ropes” of the penumbra do not stop at the surface of the photosphere, but extend outward thousands of kilometers across the chromosphere to create a maze of filaments, all constrained by complex magnetic fields, the undeniable effect of electric current flow.

One can only view with dismay the exclusive mission with which solar physicists have been tasked since the ratification of the nuclear fusion model. The task is to confirm how “something we know to be happening” is actually occurring. So simulations are produced to retrofit observations to imagined processes. And the simulations do indeed show “overturning convection” at the top of the photosphere. Recent developments, however, suggest that solar physicists themselves are beginning to sense that something isn’t right with the model. In September, 2010 an Astrophysics Journal article by L.R. Bellot Rubio et al., “Searching for Overturning Convection in Penumbral Filaments,” cast serious doubt on the whole idea. [23]

The authors acknowledge that simulations have supported the convection interpretation. But their conclusion from a diligent observational investigation is that despite “excellent quality” of the data set they worked with, “we do not detect downflows that could be associated with overturning convection in deep layers.” 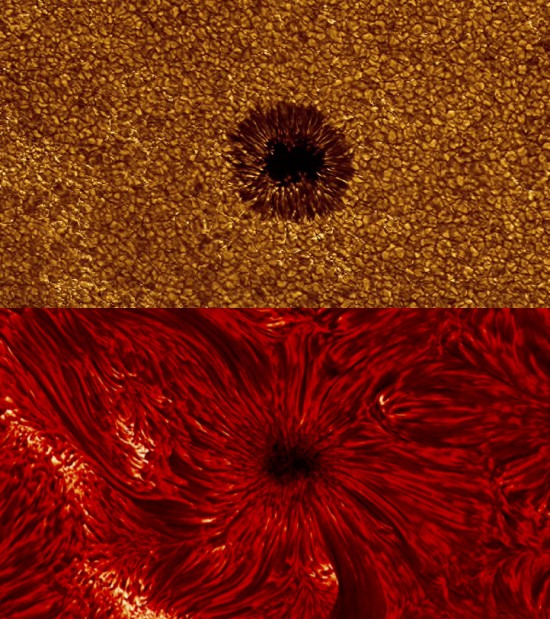 This is a very strange situation since, without convection, there is no nuclear fusion model of the Sun.

It was Hannes Alfvén, the father of modern plasma science, who advised astrophysicists that it is essential to understand electrical circuitry in order to comprehend the electrical behavior of plasma. The logical place to look for an explanation of photospheric granulation and penumbral behavior will be in the laboratory, through a detailed study of “anode tufting” in a low-pressure gas discharge.

Juergens recognized the significance of Bruce’s observations of the photosphere’s lightning-like spectra and the similarities to the behavior of plasma discharge in arc mode. For Juergens, a key principle was the role of anode tufting.

Today’s electrical theorist Don Scott takes up the tufting issue in his book, The Electric Sky. It is necessary, he says, “to visualize the ‘trap’ (or pit) that each photospheric tuft is for incoming electrons. As the trap fills with electrons, the bottom of this inverted pit will rise, and so the tuft weakens, shrinks, and eventually disappears. This is the cause of the observed shrinkage and disappearance of photospheric granules.”

Of course it is important to remember that an electric Sun must be driven by a heliospheric circuit that is itself powered by current flow along the arms of the Milky Way. Another tuft immediately replaces each disappearing tuft. That is the power of the heliospheric electric circuit, maintaining the Sun’s glow discharge.

Every year the dynamic activity of the photosphere raises more puzzles, while conventional solutions seem ever more elusive. Photospheric flares and chromospheric spicules leap upward with spectacular energies. Solar physicists long imagined that all of this activity was the result of convection and subsurface energies, at temperatures of millions of degrees, blasting material upward into the photosphere, chromosphere, and corona. In fact, we find no evidence of events below powering either the Sun’s surface activity, or the activity above the surface.

Is it possible to confirm the electrical interpretation of solar prominences and flares, including coronal mass ejections, as first proposed by Charles Bruce in the early 1940s? The electrical interpretation of solar flares and CMEs requires a powerful release of charge in the atmosphere above the surface. And this consideration brings us to a more recent investigation by NASA’s Peter Schuck who sought to determine “whether the eruptions are driven by energy surging through the Sun’s surface, or by the sudden release of energy that has slowly accumulated in the atmosphere.”

“In some sense, the idea that energy from below triggers the eruption is the easiest explanation – like a geyser,” says Schuck, a physicist who studies space weather at NASA’s Goddard Space Flight Center in Greenbelt, Md. “But if the idea doesn’t agree with what’s observed, then it’s wrong. End of story.”

Schuck’s research led him to conclude that the trigger does indeed occur in the atmosphere above the photosphere. He found that the required velocities of the photospheric plasma to blast the flares upward would be a thousand kilometers per second, speeds that would be easily detected. What he saw instead “was a sudden explosion triggered from above, more like lightning.”

According to Schuck, “the observational component of this study places important constraints on any hypothesis that relies on the photosphere for the power 1029-1030 erg s-1 driving a CME. These hypotheses are likely incompatible with the present investigation…” [24]

The tragedy is that no level of negative evidence seems powerful enough to throw the core theoretical assumption into doubt. The NASA story on the study assures us that the energy of the lightning bolt cannot originate in the plasma atmosphere above the surface: “Either way,” the report stresses, “the energy originally comes from the surface.”

Limitations of space for this article prevent us from summarizing a couple of dozen additional pointers to the electric nature of the Sun. The sunspot cycle, the very existence of the corona, an electrified torus around the solar equator, the relationship of this torus to sunspot behavior and to the “ballerina skirt” of the Sun’s current sheet, super rotation of the Sun’s equatorial photospheric plasma, distribution of coronal holes, bi-polar jets, temperature and energy profiles of chromospheric spicules, and the so-called “open” magnetic field lines connecting the Sun to interstellar space—these and many other attributes must be brought into a broader investigation, raising questions that have not been asked with sufficient seriousness for at least 60 years.

A Reason for Optimism?

Until quite recently most astronomers barely gave electricity in space a sideways glance. And yet, through the back door, we now see a growing interest in the role of magnetism across the cosmos. In the rarefied plasma environment of space, magnetic fields are the proof of active electric currents, even if this proof is ignored. But with surprising rapidity, perhaps in the course of just 15 years, the “magnetic universe” has emerged as a permissible expression within the scientific mainstream. This radical turn may prove to be the most promising bridge to a shift in astrophysical perception, eventually making it impossible to ignore the electric currents without which the “magnetic universe” would disappear.

Perhaps the role of galactic current filaments, on which stars are now observed to form, will catch the attention of solar physicists, causing them to wonder how the heliosphere could be immune to such current flow. Perhaps their field of view will extend to electrical forces acting on comets as they move through the same electric field of the Sun that accelerates charged particles away from the Sun.

And perhaps solar physicists will begin giving closer attention to the electrical activity on planets and moons, from the Everest-sized dust devils and global dust storms on Mars to the electric currents driving powerful events on Jupiter’s moon Io and Saturn’s moon Enceladus. The fact that the dominant space age surprises consistently point to electrical events, can hardly be accidental.