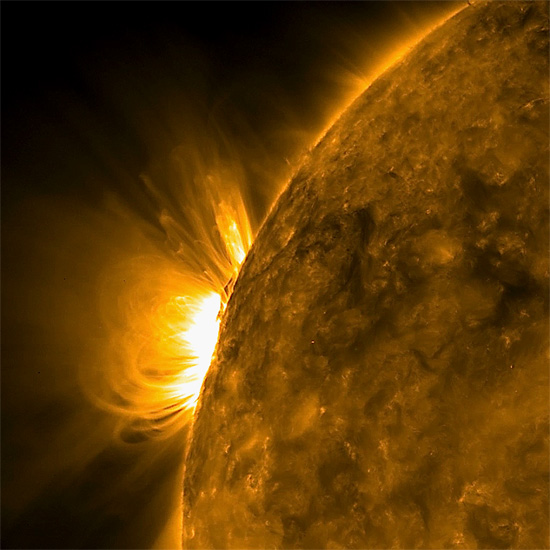 Is it the breaking and reconnecting of magnetic field lines that power solar phenomena?

According to a popular view of the Sun, its core pressure is supposed to be so high that it crushes hydrogen atoms together until they fuse into helium atoms, releasing energy of such magnitude that Earth, 148 million kilometers away, is bathed in life-giving radiation. The Sun’s core is thought to be more than 15 million Celsius, and greater than 340 billion times Earth’s atmospheric pressure.

Above the photosphere, the part of the Sun that is seen, the chromosphere extends for thousands of kilometers. Above that, the corona extends for millions of kilometers. One of the greatest mysteries about the Sun is why the photosphere averages 6000 Celsius, while the corona can be as much as two million Celsius! Why does the hottest region of the Sun begin at an altitude of 4000 kilometers, extend over a million kilometers from its surface, and show no sign of a significant temperature drop?

Some heliophysicists propose that the “rearrangement of magnetic field lines,” otherwise known as “magnetic reconnection,” causes the heating. Satellite observatories, such as SOHO (Solar and Heliospheric Observatory) and TRACE (Transition Region and Coronal Explorer) have detected small, rapidly changing magnetic regions on the Sun’s surface. Consensus viewpoints see that activity as proof that reconnection events are heating the solar corona.

What is magnetic reconnection? Briefly, magnetic field lines in a plasma are said to “break” and “reconnect”. Since solar plasmas are complex systems, how those lines break apart and come together again, releasing enormous amounts of light and thermal energy, is not well understood. That lack of understanding is not surprising to Electric Universe advocates because no one has ever seen magnetic field lines reconnecting. According to the author of The Electric Sky, Donald Scott, no one ever will.

The Sun behaves according to the laws of electromagnetism and is a positively charged electrode in a circuit that spans the Solar System. The negatively charged electrode to which the solar energy moves in that circuit is located far beyond the planets, nearly 100 times the radius of Earth’s orbit. That “virtual cathode” is known as the heliopause.

The electric model sees sunspots, solar flares, coronal heating, and all other solar activity as fluctuations in the amount of charge flowing into the Sun. That electric current arrives in the form of plasma filaments that are gigantic in scale. They are extremely diffuse, but are so large that they carry tremendous amounts of electricity. These Birkeland current filaments supply more or less power to the electric circuit powering the Sun.

Star power comes from external electric currents flowing through vast circuits in space, so the radiation and “wind” from the Sun are due to plasma discharge phenomena of various types that vary in strength. It is those phenomena that make up the stellar corona, chromosphere and photosphere of our Sun, for instance. The Sun’s energy is focused from the outside and not radiated from the inside.

Double layers form when electricity flows in plasma, causing positive charges to build up in one region of a plasma cloud and negative charges to build up nearby. A powerful electric field appears between the two regions, which accelerates charged particles. Sometimes, the stored electrical energy in a double layer is catastrophically discharged in a “Langmuir burst.” Those bursts are what conventional astrophysicists call “magnetic reconnection.”

As Electric Universe author and speaker Wal Thornhill says: “A star is a pinpoint object at the center of a vast plasma sheath. The plasma sheath forms the boundary of the electrical influence of the star, where it meets the electrical environment of the galaxy.”

Plasma physicist Hannes Alfvén wrote (page 9): “The most important criticism of the ‘merging’ mechanism of energy transfer is due to Heikkila (1973) who with increasing strength has demonstrated that it is wrong. In spite of all this, we have witnessed at the same time an enormously voluminous formalism building up based on this obviously erroneous concept. Indeed, we have been burdened with a gigantic pseudo-science which penetrates large parts of cosmic plasma physics…We may conclude that anyone who uses the merging concepts states by implication that no double layers exist.”