Re: Energy required to arc blast the creation of mountains?

Thank you nick and webolife for your response. If I were an engineer or scientist familiar with plasma etching Iand how that scales up and relates to geolocical materials, would have made the calculations already. Guess I was thinking that prominent proponents who have the requisite knowledge and skill would already have done this! I have over and over seen all those dramatic EU artists' renderings of gigantic discharges between planets, so assumed there must already have been calculations done. If there have not been then I will be dissapointed. Hoping someone with that information notices this discussion:)
Top

Some on the EU Geology side might take an interest in this location. It may be an opportunity to study the composition of the individual layers that resulted from one (or more) of the alleged cataclysms.
Politics are a scratch on the platinum record of Life, and society is stuck in the loop.
Top I believe I've found evidence for another process by which rivers can be created, and it's would appear to be electrical in nature. Apologies in advance for the awkward video.

Part 2 is still cooking.
Politics are a scratch on the platinum record of Life, and society is stuck in the loop.
Top

Not all at once.
Politics are a scratch on the platinum record of Life, and society is stuck in the loop.
Top

A small synopsis would help, not everybody has time to watch youtube.

I don't have the data. If I try watching all the videos I get excess usage charges.

Very interesting vortex graphics... however, without a physical theory to back up his conclusions, it's just a pattern to be either explained or explained away, for example:
1. The vortical pattern is the result of a series of electrical or plasma events that predisposed the upper crustal layers to weaken in a systematic way centered upon the vortex axis, [and here's the physical evidence of that] or...
2. The river's course was directly pushed and pulled by electric fields spinning in the atmospheric vortex, forming the entire river valley system in a very short time, [and here's the physical evidence of that] or...
3. The river's course was predisposed toward the central basin or valley, and the earth's rotation predisposed the river to erode through layers of that basin in a patterned way, [and here's physical evidence -- all the spirals are represented with the same chirality], etc.] or...
4. The spirals were drawn with a predetermined vortex pattern in mind, and no actual pattern exists, [and here's the physical evidence of that] or...
5. <insert your favorite explanation>
Truth extends beyond the border of self-limiting science. Free discourse among opposing viewpoints draws the open-minded away from the darkness of inevitable bias and nearer to the light of universal reality.
Top

What this reminded me of is the theory of telluric energy or ley lines - thought not lines but spirals. Someone mentioned above something about spiralling energies/plasma events in the atmosphere possibly causing weakness and changing the course of the rivers (if I understood that correctly).

I am not well versed (ok not at all!) in what is supposed to create a river's course so I wasn't sure at first if the video was showing anything but superimposed patterns onto maps of rivers with extremely winding paths. I had an inkling of some possibility of something different only after the second video when it was mentioned the rivers weren't taking the easiest path - my brain said 'oh right! That's how a river is usually made!' remembering some long lost geography class.

Are you planning to create a video to elaborate this concept in terms that laypeople can see the difference?

A synopsis in print would've been nice, I agree - especially one that pointed out (probably you can't believe people don't know this!) 'rivers normally follow the easiest course - here's a couple among more that don't and why you know this. I'd be very interested in watching that - (these were interesting - just would love to see the other). Thanks!

An experienced house roofer once told me: there are two things you need
to know to be a good roofer; 1. water runs down hill, and 2. pay day is Friday !
jack
Top 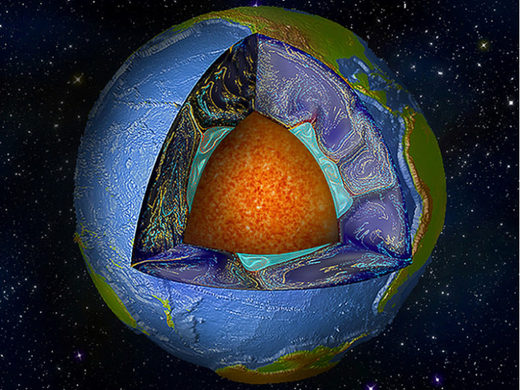 Looks about 120º, optimal for deflection of an electric strike.


The Unsolved Mystery of the Earth Blobs
...
research has suggested that tectonics may help sustain life by delivering a steady stream of nutrients, like nitrogen and phosphorus, to the surface. And yet researchers aren't sure what causes plate tectonic movement, let alone the blobs.

Clearly there are Earth crustal fragments in motion today, that's what tectonic means. The asymmetry of the parts and the poles suggests a near-recent turmoil, imposed upon whatever pre-existing motions of Earth's surface were present at the time, in play with the ever present sub-surface driving currents.
'Subductions' are a natural response to the driving motions of heat and cooling around a center of gravity.
Geologists know this, but have been cowed and hobbled by a subverted educational / indoctronal system.
Regrettably for humankind, as they aren't the only ones. imo

Tectonic movement is not supported by observations:

http://www.davidpratt.info/lowman.htm
There are no other dogs but The Great Dog
Top

The Great Dog wrote:Tectonic movement is not supported by observations:

Instead of oceanic lithosphere being underthrust beneath the island arcs and backarc basins at Wadati-Benioff zones, an alternative view is that the continental cores of the mountain belts and island arc-trench system are being overthrust toward the foreland or the ocean basins by vertical-tectonic processes (e.g. Krebs, 1975; Wezel, 1986; Dickins and Choi, 2000; Oard, 2000b; Suzuki, 2001a). The Wadati-Benioff zone would represent the deformation interface between the uplifting island arc/continental region and the subsiding ocean crust and mantle.

~
But i get your drift, continental or otherwise. "Subduction"' (originally from sub+duce as in conduce) has, like some other radioactive terms such as 'reconnection' and 'lines', been subverted to common use in theories (of earth-crustal plates sliding beneath and above each other); and would have been better here replaced with subsidance or convections .
Both vertical and lateral motions have been recorded, and can be readily observed in an active volcano, a smelting crucible or even in the tube of a lava lamp. Nevertheless, you are correct to call out the poor choice of words.

It was the seismic image they provided that provoked the initial post. Do you have an opinion on the provenance of those "mantle blobs" ? Seismographic artifacts? Sub-mantle emanations? Artistic license or maybe internal scars from an external shock?
Afaik, it's new data, and i would appreciate any prognosis.
Top

1.It is the Cavendish experiment that determines the structure of the present earth. This is wrong.
http://www.thunderbolts.info/forum/phpB ... 10&t=16906

2. From the analysis of deep earthquakes, gravity is not working inside the earth and there are hollows.
https://etherealmatters.org/article/hug ... side-earth

First, let's think from the power that is rotating the earth.