willendure wrote: The question that comes to my mind is, if it has been a planet with a stronger magnetic field, would the interaction have been a more or less violent one?

With Earth the repulsion would be greater (due to strong mag field) which would in turn result in less "chaos" because the asteroid could not affect our atmosphere in the same was as Mars's atmosphere was now.

That was my initial thought, but I am not so sure. Yes, the earth's magnetosphere would not be put into such a chaotic state, I agree, as it is much stronger and would be able to withstand the influence of the comet.

I am wondering if such an interaction would be a more energetic and violent event. The comet interacting with Mars' weak field, is like a lorry driving through a pile of dried leaves on the road and scattering them. The comet interacting with Earth's much stronger field might be like two lorries colliding. The two stronger magnetic fields would be squashed up against each other, containing much more energy - would that then be released as a big current flow, perhaps resulting in mega lightning, or at least some kind of super aurora effect?
Top

My mind certainly expects a bigger reaction in the "Earth" toss, given similar distance. My magnet is going to steer more wildly. It might even get attracted and flare up in the atmosphere. Or it might be repulsed away, depending on the alignments of the fields.

Since the EU does not use ice sublimation, what would be the explanation between this tailless comet and comets with tails?
Top

Perhaps "S3" is discharging, though not enough to produce a visible tail. One of the basic concepts of EU is that everything is connected, while mainstream astrophysics views everything as isolated (e.g. the Sun's power is completely internal, or spectra from comets show water so they must be made of ice). This occurred to me while watching a documentary about sprites, which were described as rare and fleeting. Suppose they're happening all the time (as per the EU model), only we simply do not see it?

"Virtually" tailless? Does that mean it it had some sort of discharge? That's the problem with sketchy science "journalism" like this. It often seems to be written to sell an idea and discount anything suggesting some other possibility. There are the stock phrases, for one. All together now: "may offer clues into long-standing questions about the solar system's formation and evolution."

I'd have to research what else is known about S3 to get a better picture.
Top

It could be that the composition of this comet is such that material is not so easily stripped from its surface by the solar "wind". Maybe its pretty much a solid lump of iron.
Top

I myself would not trust much of the mainstream information from this site.

And when did comets start to have erosion on the surface? Erosion on a comet, come on, they should
be able to imagine far more than that. Also, according to my eye sight, this particular one is
made up of lava, so much for their icy dirt balls.
Then also, how did a comet become lava?
Top

Thank you, pm.
I think you mean basalt, or igneous rock, which is lava cooled down.
Lava is molten rock.

It surprises me to see great boulders lying around on the surface.
I expected a layer of dust.
How much gravity does a comet have?

Erosion on comets would be caused electrically, the evacuated material forming the tail, or tails.
I imagine the process erodes the looser material around the boulders while they are still in the escarpment, freeing the boulders to gently fall down to the plain.

The erosive agent [from terrestrial analogs] that is evident in the comet photos is basically gravitational mass movement, forming the talus at the base of the sharp precipices. There does seem to be a coating of dust over everything, so the comet's electrical environment has done its work.
Truth extends beyond the border of self-limiting science. Free discourse among opposing viewpoints draws the open-minded away from the darkness of inevitable bias and nearer to the light of universal reality.
Top

What 'electrical' environment would this be? Please point me to the results from various instruments that would detect such things. It sounds like you are making things up here.
Top

LaSuisse1, There were three ion detectors on the Rosetta probe, if i recall correctly, and results are still be analyzed and dribbled (slowly) out.

Abstract
Context. On 20 January 2015 the Rosetta spacecraft was at a heliocentric distance of 2.5 AU, accompanying comet 67P/Churyumov-Gerasimenko on its journey toward the Sun. The Ion Composition Analyser (RPC-ICA), other instruments of the Rosetta Plasma Consortium, and the ROSINA instrument made observations relevant to the generation of plasma waves in the cometary environment.

What 'electrical' environment would this be? Please point me to the results from various instruments that would detect such things. It sounds like you are making things up here.

Sorry. I had read the same abstract that Seasmith linked above, his second link:
http://www.hou.usra.edu/meetings/lpsc2015/pdf/2312.pdf

So the local ionizaton of the comet is interacting with the solar "atmosphere" [ie. solar wind]...
My thinking was that this would be a likely cause of the light dusting evident in the surface photos.
Truth extends beyond the border of self-limiting science. Free discourse among opposing viewpoints draws the open-minded away from the darkness of inevitable bias and nearer to the light of universal reality.
Top 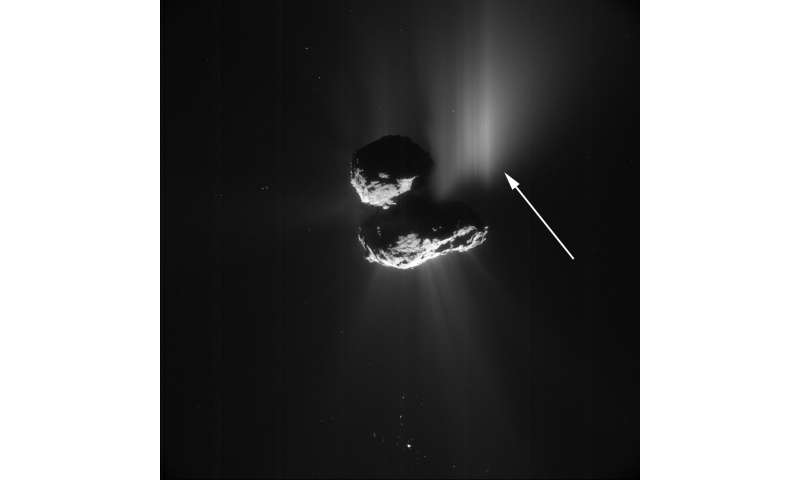 Read more at: https://phys.org/news/2017-03-rosetta-c ... e.html#jCp
So they think this is dust kicked off by the collapse of the Aswan cliff, and this is reflected sunlight? Nobody seems to know what the NavCam actually 'sees', but I suspect a Lyman Alpha emission of hydrogen, in which case this is probably produced in an electron beam, the beam also being responsible for the collapse, and if the NAC was seeing IR, then the white area identified as ice may have been a slightly warmer area heated by the beam.
In order to change an existing paradigm you do not struggle to try and change the problematic model. You create a new model and make the old one obsolete. -Buckminster Fuller
Top

I'm sorry, but the above comments make no scientific sense whatsoever. It is well known that the solar wind is not reaching the comet nucleus as the outgassing increases. It cannot cause any erosion. The only 'plasma' that is found for many months close to the comet is of cometary origin. That is, from the sublimated ices, due to mainly photoionization. It is vastly outnumbered by cometary neutrals, such as H2O and CO2. In Oktober 2015 Rosetta travelled to 1500km in the sunward direction. It did not encounter the solar wind. It was missing from the sensors for around 10 months. So solar wind interaction cannot be called upon to explain anything at this time. And it certainly cannot explain the dust, which has been seen to be due to deposition from elsewhere on the comet due to outgassing. And the outburst of in the image certainly cannot be from lyman-alpha, it is sunlight from dust. The instruments would see such a thing over a period two years. The navcam only sees in optical light, and that image is highly stretched. And I have no idea what is meant by 'an electron beam'! Where did it come from, and how did it evade the instruments?
As for the ice patch; it is ice. It is spectroscopically resolved as ice. Not during this investigation, but in previous papers looking at the debris at the feet of cliffs. This is not a guess, or an assumption. It is ice.
Top

Thank you LaSuisse1.
So it is photon bombardment, that caused the cliff to collapse, and causes the outgassing, and ionization.
And maybe that also explains the formation and angles of the dust rays.
~Paul
Top

comingfrom wrote:Thank you LaSuisse1.
So it is photon bombardment, that caused the cliff to collapse, and causes the outgassing, and ionization.
And maybe that also explains the formation and angles of the dust rays.
~Paul

I have precisely no idea what you mean by photon bombardment! The cliff collapses due to thermal stress. Contraction and expansion over and over. Due to heat. The temperature swings are large, and immediate. It happens on Earth as well, but you do not get the huge swings in temperature as at a comet. When it collapses a load of dust is released, and ice may be exposed. Rosetta was in the way of one of these events in February 2016. First they detect the H2O, and then they detect the dust. This is normal, as the gas expands at ~600 m/s, and the dust at a much slower rate. So we know that the dust is dust, and not Lyman-a (although I think you meant the Balmer series as that is visible to our eyes. However, it requires neutral H, because the transition that causes it is due to the de-excitation of the electron from n>3 to n=2).
And we know that the H2O is H2O, as it is detected by MIRO in the sub-mm range, at ~557 GHz.

There is also no chance that the bright spots you mention are 'hot'. One of the links I left in the other thread shows temperature maps of where ice was detected. It is colder. Not surprisingly.
Top
Locked
462 posts