67P, why erosion from the neck?


Scientists from Rosetta’s OSIRIS team have discovered an extraordinary formation on the larger lobe of comet 67P/Churyumov-Gerasimenko in the Aker region. From a group of three boulders, the largest one with a diameter of approximately 98 feet (30 meters) stands out: images obtained September 16, 2014, from a distance of 18 miles (29 kilometers) with the help of Rosetta’s scientific imaging system OSIRIS show it to perch on the rim of a small depression. There seems to be only a small contact area with the nucleus. Magnetodynamic accretion...?? Other similar but smaller objects nearby and to the right.
Top 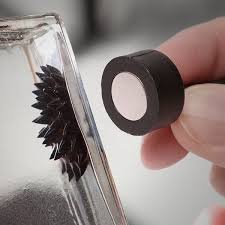 They'll never consider that though.
Top

Examine details in the expanded closeup. There are parallel striations above and looping around the left of the objects which have the appearance of wrinkles pushed up by an impact of something coming from the right. There is also a depression on the right that could be the remnant of an impact. The word “impact” is not to imply a catastrophic impact but more of a low relative velocity merging of a smaller body into the larger, such that the resulting inertial energy dissipation pushed up the wrinkles. If the smaller body or bodies which embedded into the larger were iron that would explain the source of local magnetic field activity which would accrete more iron on the “flux lines”. I see a hexagon. Left of the numbers.

Yes. One of the ways that the Rosensweig instability manifests is in hexagonal (and partial hexagons with 120 degree angles) formations and points that look like the ends of Phillip's screwdrivers.

In my 2014 presentation, I argued that Rosensweig instabilities created a lot of the hexagonal formations on Mars, as well as the "spiders" that look like brachiated mounds all in a row. These structures remind me of the upraised polygons on Mars -- and in the presence of hexagons on 67P, no less.

Hi all, just joining this enjoyable thread after long absence... retirement is keeping me much busier than I had anticipated.

About the mid '80s I began challenging students with my own questions/opinions about comet tail generation. At that time I suggested, by way of analogy with a falling rock:
1. Comets and asteroids are essentially the same bodies, subject to different solar orbits/environments.
2. The changing of that environment [eg. perturbation of close encounters] may "activate" the comet.
3. Tail material may be partly or largely a disturbance in the interplanetary medium/solar "wind", analogous somewhat to dropping a rock in a pond of water.
4. If the rock is "dirty", material from [the comet] may be mixed in with the IPM/SW, as dirt in the sinking rock is stripped off by friction with the water.
5. Stripped off dirt would naturally "float" to the top in the "up" direction, not trail behind in the path of the rock, the resulting comet "tail" hence being opposite the sun's "gravitation" -- this is seen and has been confirmed remarkably in videos of sungrazers, imo.
6. Contrary to Starbiter's Velikovskian assertions elsewhere, I didn't and still don't believe comets are a major IP source of water, although I accept that formulation of IP water may be due to the interaction of OH- from planetary/cometary "outgassing" and H+ ions from the solar wind, which I now regard as being the solar plasmic atmosphere, as it is primarily shaped by solar magnetic flux...

Since coming to Thunderbolts about 10 years ago, I understand better that the "environment" I was referring to is electrically charged, adding the electrolysis mechanism well-described by earlier posters in this thread. In addition, since cometary nuclei are by nature non-spherical, the electrolysis will be non-symmetric and self-perpetuating. I agree with both the assertion and questioning of the gases being outgassed from the "interior" -- since the cometary surface is the electrolytic interface, as the electro-erosion occurs, more [indented] surface area will be available at that initial location perpetuating/increasing the electrolysis and resulting in the overall peanut shape. The increased jets in those indented areas then give the impression that the jetted material is concentrated toward the interior, rather than at the surface. My supposition is that the comet composition is relatively uniform. At the same time, the spin of the comet will be altered by loss of jetted matter into the tumbling mode typically seen on 67P along with other asteroids and comet nuclei. This model might be quickly disproved by the discovery of comets or asteroids with a spin around the "polar" axis [between the two lobes] of the peanut, something I've not yet seen...

As always, open to rebuttals and clarifications from all of you very intelligent posters.
Truth extends beyond the border of self-limiting science. Free discourse among opposing viewpoints draws the open-minded away from the darkness of inevitable bias and nearer to the light of universal reality.
Top

Just to touch again on the "Balancing Rock" post at the top of this page,


"The comet 67P/Churyumov–Gerasimenko has no global magnetic field, according to scientists working on the European Space Agency's Rosetta mission.

However, they have detected a "100 amp electric current" around the comet, fwiw...

Photo-electrochemical erosive processes, no earthquakes, etc, etc.
Also Maol,
re those parallel striations and ledge formations noted above, there could be a more mundane possibility ...
Top

Charles Chandler wrote:In my comet model, there are a total of 4 layers of alternating charge (2 positive and 2 negative). The charge separation mechanism is frictional charging from the comet moving through the interplanetary medium (IPM). When the comet is going against the solar wind, the charging is the most robust. As is always the case when a solid object moves through a gas/plasma, a boundary layer of gas/plasma builds up on the leading side of the object. If the velocity of the object is supersonic, this transforms into a detached bow shock, and the boundary layer gets bigger with increasing velocity, contrary to the subsonic regime, in which the boundary layer gets compressed with increasing velocity. The reason for the detached bow shock is that as the comet moves through the IPM, neutral atoms in the IPM impinging on the boundary layer have their electrons stripped off, and the atomic nuclei get embedded in the boundary layer deeper than the electrons, due to the greater mass of the +ions. This creates a halo around the comet, with a layer of stripped electrons left around the outside, and a layer of +ions on the inside, up against the comet. Electrostatic repulsion between the +ions is what bloats the boundary layer out into the detached bow shock. The other 2 layers of charge are inside the comet itself. The +ions in the comet's atmosphere induce a negative charge on its surface, and that induces a positive charge in its core.

The double layers on the comet are maintained by the + charge obtained from the IPM. The Negative charge is created on the surface as electrons are stripped by attraction to the + double layer. I would guess this could be the current they are measuring, idk, have they reported on it since May?

Ok, So I was thinking, lets say we start with some kind of bar-like non-spherical object. The double layers form. In a Sphere we would have material streaming from all over the surface, but on our bar-like object, the ends will always be closer to the outer layer than the middle of the object. With a sphere it would just be an induced positive charge to the core material. But with the bar, the charge builds on the ends, and combined with positively charged dust, it begins to form a double layer inducing a negative charge to the center of the bar. The cliff boundaries are the boundaries of the 3rd inner negative layer. A lot would be dependent on the actual spin axis.

I would guess if no other factors were at play, the rate of particles jetting out should be proportional to the rate of positive charged particles accruing in the outer positive layer.
Top
Locked
85 posts