Plasma formations in the ancient sky. The role of planets as charged bodies in these formations. Ground-rules for drawing reliable conclusions. A new approach to the mythic archetypes: is a unified theory of world mythology possible?
Forum rules
Locked
First unread post • 19 posts

...in my first vision of a “polar configuration.”

Considering your, [and Cardona’s] past references to a Northern polar alignment, for the configurations alluded to above, and, given Peratt’s conclusion that the overwhelming majority of ancient petroglyphs have a SFOV [Southern Field of View];
Would you care to comment on your current view of polar alignments?
Perhaps beginning with the example of proto-Saturn and associated column/axis-mundi/mound, as depicted in your above video trailer.

"Logic is the art of non-contradictory identification"......" I am therefore Ill think"
Ayn Rand
"It is the mark of an educated mind to be able to entertain a thought without accepting it."
Aristotle
Top

Plasmatic, do you have a source for that quote??

Oops , THE SATURN MYTH by Dave Talbott
"Logic is the art of non-contradictory identification"......" I am therefore Ill think"
Ayn Rand
"It is the mark of an educated mind to be able to entertain a thought without accepting it."
Aristotle
Top

Published 28 years ago, and i've read "Thunderbolts of the Gods", but my question to Dave is in the current context of sources cited above.
I'm not trying to be contentious or contrary. Merely seeking a common framework of observations and theories to save a lot of back and forth in our discussion and comparative analysis of the "Origins of Myth".

Sincere thanks for the pertinent quote Plas,

Ill let Dave speak for himself ,but I think youll find that the Mytho historical records are not what has changed .they are what they are . But Id expect simply the interpretations of aspects of planets that where called " clouds of gas and dust" would now be called plasma filaments. Simply a replacement or insertion of plasma were there wasnt before. But all the Perrat papers and sfov in the world arent going to change the actual recorded memories.We can only discover the ancints words and symbols. What the 2 differences mean .. well thats another story...Pole change , lost references maybe some nfov glyphs not discovered , well see I guess.....But Im interested as any in Daves own perspective beyond what little Ive heard on the subject.
"Logic is the art of non-contradictory identification"......" I am therefore Ill think"
Ayn Rand
"It is the mark of an educated mind to be able to entertain a thought without accepting it."
Aristotle
Top

Regarding the "polar" station of the great luminary early astronomers identified as Saturn:

I gave the benefit of the doubt to the north celestial pole, while emphasizing over the years that ancient language itself does not permit you to distinguish between north, south, east or west in translations of early texts. The language of modern geographic directions came relatively late. The original language arose from COSMOGRAPHY, based primarily on relative positions of celestial bodies and the unique formations around them in the celestial theater. Right and left, above and below (supplemented by "extreme below," which I'll have to explain), upper and lower, front and back, base and summit, center (axis, axle) and boundary, inside and outside, etc. Eventually these words describing relative positions were applied to the sacred directions of kingdom on earth, which quickly confused the picture. Geographically, "up" and "down" do not have the same references in Egypt and Mesopotamia, for example, despite the fact that the original directional language of the two cultures is surprisingly consistent.

And there you have it. "Ra rises in the eastern horizon." The translation is simple and obvious, except for the fact that it can only lead to contradictions and cannot be correct.

So where did the formations being documented by Anthony Peratt originate? It may surprise those who've begun to follow Peratt's independent investigation to know that when I first forwarded to him a set of images including the now-famous "chain of arrows," "backbone of the sky (ladder of heaven)," and "eye mask," I stated in no uncertain terms that these formations were seen in the south. They all belong to a phase (phases, really) that I called "displacement" or "wandering."

Therefore, the issue as to where the station of the original polar sun might have been can remain open. When Manilius said of Saturn that the god was "thrown down to the opposite end of the world axis," it could be that he left a telling clue as to the god's original location.


“Therefore, the issue as to where the station of the original polar sun might have been can remain open.”

Thank you for that. I agree, it is probably wise to start from that flexible perspective.

As an aside, I would also entertain the possibility that the ‘near polar’ asterisms portrayed on the famous Egyptian carved stone relief called the Circular Zodiac of Denderah [now in the Louvre] may serve as ~post-Ages of Chaos ‘markers’, for some proto-Saturnian configurations originally seen in that portion of the sky, wherever that portion was relative to the cardinal directions of today.

A decent drawing and description of the Denderah relief may be found in Charles Dupuis’ “The Origin of all Religious Worship” pub.1872 (available on Amazon).

The center portion is pictured below: 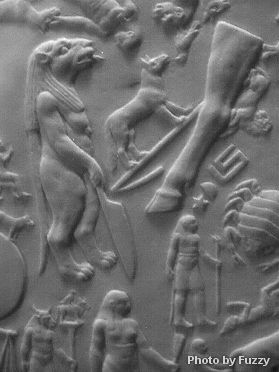 Would it be helpful to point to the abstract & excerpts from Dwardu Cardona's "THE DEMANDS OF THE SATURNIAN CONFIGURATION THEORY"?

(The Demands of the Saturnian Configuration Theory; Introduction / abstract)
http://www.sis-group.org.uk/silver/cardona.htm

Granted, his much more recent books God Star and Flare Star are undoubtedly far more interesting and a bit more expansive treatments of the topic.

Or perhaps even Dave's own summary exegesis?

For those interested in a fair bit of reading to get their initial bearings on some "prior art," as it were.

So how did we survive going through the plasmasphere to orbit the sun all alone, if we were inside the envelope of Saturn before? One thing mentioned was that life on planets in the atmosphere of dwarfs wouldn't see stars and might never leave or maybe wouldn't be able to escape
Top

I think the answer by a few has been "just barely..."

I think the answer by a few has been "just barely..."

Now, if it were just me, I might have tended to rather quickly become a largely cave-dweller overnight... Put as much solid rock between me and the bad stuff as possible, hope it's enough. Heh.

There does seem to be some evidence of ancient cultures using caves for various purposes, or incising living spaces into hewn stone walls. Though I'd not care to speculate on whether such was a "survival tactic" or simply something their culture enjoyed or was good at in general.

Anyway, there also does seem to be considerable evidence that sea levels were considerably lower in the past. Rising sea levels appear to have "hidden" quite a bit of our past from us by submerging ancient cities and even a few caves that have been used by ancient cultures. It'll be interesting to see if such things ever yield interesting archaeological results that might shed light on those cultures, how the perished or migrated elsewhere, etc.

In any event. Things aren't quite as they seem. It becomes readily apparent that at some point in the not-too-distant past there have been catastrophes that have raised the sea levels, submerged ancient cities and ritual sites {?} (I hesitate to use the term "sacred sites," as that tends to have a bit more of a "mystical" connotation than is necessary).

But, perhaps this line of inquiry would again best be suited to a separate thread (there used to be one in the planetary science forum on "Thunderbolts Forum 1.0," perhaps I'll fork this over there and restart it)...

Addendum: I've forked this topic over to the Planetary Science forum. If anyone has a response for this particular post, feel free to follow up on it over there, so as not to divert this thread off onto tangents. *Irony noted*

"The purpose of science is to investigate the unexplained, not to explain the uninvestigated." ~Dr. Stephen Rorke
"For every PhD there is an equal and opposite PhD." ~Gibson's law
Top

Is it still unclear whether the polar station was in the north or the south?

If so, why is it not considered that the south of our planet is like the side of the moon that faces us all of the time?

Just comparing the two alone has caused me to ask "Why is our planet like that, when we don't face anything in the south?". "We used to" would be a good answer.
Top

If so, why is it not considered that the south of our planet is like the side of the moon that faces us all of the time?

Good question. How long was the Earth in the shadow of Saturn and would it be long enough for our planet to become tidally locked? I don't think there is another example of a planetoid becoming tidally locked at the North or South pole (usually equatorial, I don't know how the process would work in a polar configuration).

Until the reconstruction is reasonably defined in terms of a visual reconstruction, along with the corresponding mythic archetypes, there's too much ground for guessing at answers.

But please don't misunderstand. The questions are completely legitimate, and should be kept in mind as the archetypes themselves are elaborated over the months to follow.