This thread is a merger of the following threads:

"new" EU crater discovered on Earth or a doline?

hex craters in the deep ocean?

Could this be plasma caused craters in the ocean off Norther California? See google earth 41 deg 6 min North by 125 deg 18 min West

I see a line of craters, but am unable to see the hex shape.

I will accept that you can see the hex shape, but just the line of craters suggests that they are discharge craters.
"It is dangerous to be right in matters where established men are wrong."
"Doubt is not an agreeable condition, but certainty is an absurd one."
"Those who can make you believe absurdities, can make you commit atrocities." Voltaire
Top

Better images of the hex creates off the Northern California coast. They can be fund here http://www.pursuetheoutdoors.com/fishin ... a42126.php
I have increased the contrast in the image below to bring out the hex creaters.

yes, i can see some straight sides, but these craters are run together, so i don't see a distinct 6 sided crater, but sides of craters imply a six sided structure....thanks for improving contrast....it's mostly my eyes and my monitor....

has a large portion of the image deleted! Why did they post an image and redact so much of it?
"It is dangerous to be right in matters where established men are wrong."
"Doubt is not an agreeable condition, but certainty is an absurd one."
"Those who can make you believe absurdities, can make you commit atrocities." Voltaire
Top

Sparky wrote:yes, i can see some straight sides, but these craters are run together, so i don't see a distinct 6 sided crater, but sides of craters imply a six sided structure....thanks for improving contrast....it's mostly my eyes and my monitor....

has a large portion of the image deleted! Why did they post an image and redact so much of it?

I don't think the image has been redacted, I think it was as much as was surveyed that made the map.
Top

I recently discovered the "Patomskiy Crater" and noticed there wasn't any discussion of it here or in any TPoD's:


Scientists from various research institutes in the country come to this conclusion at a recent St. Petersburg Mining University Scientific Conference "Patom crater-2010. The conference brought together professionals involved in the expedition of 2010 on the crater, and expedition members 2006 and 2008 – geologists, geochemists, geophysicists and astronomers from Irkutsk, St. Petersburg, Yekaterinburg and Moscow. RAS were scientists from the Institute of Geochemistry and the Institute of Solar-Terrestrial Physics.

Here's an image of the "Patomsky Crater":

Good find StalkingGoogle, I hadn't seen that one before.

The Russians have ruled out a meteor strike from what I see. It looks
like a Proton Torpedo hit to me, but that would be silly I guess.

There are rumoured to be others in the region, no confirmation on that, and
there is a magnetic anomoly around there, so maybe ground currents, and
atmospheric electrical activity setting up a natural proton beam drill?
No much detail, but:
Google Earth Coordinates:
59°17'4.14"N
116°35'20.64"E
In order to change an existing paradigm you do not struggle to try and change the problematic model. You create a new model and make the old one obsolete. -Buckminster Fuller
Top

Is object 2 a mass that they think is buried below the crater? A prolate spheroid?

Some help, from a Forum reader who can read and translate Cyrillic characters in Russian to English, would be a great help here.

If the crater is only 100m tall, which looks in the right range judging from the scale of the trees around it, it is not a very large one as such things go, but something certainly cleared out a large patch of forest and buried it under a lot of rock! The central mound is certainly puzzling - the stuff looks loose, like large rocks, without signs of large-scale melting, but at the resolution available, it is hard to ascertain such detail. Interesting puzzle to solve. Is it new? Was it referred to earlier in history? Are there earlier images of it, from the ground or aerial/satellite photos? Have studies shown it to be similar in make-up to the underlying strata?

There are some interesting pictures in 2 Youtube presentations concerning the Patomskiy crater here and here. Both are incoherent presentations but it appears that the 'crater' comprises fractured limestone varying in size from ~1m down to dust.

There is a translated report on scientific findings here which seems to discount the possibility of it being an impact crater based on gravimetric studies. The report mentions the possibility of a gas breakthrough. A cool, explosive event seems more consistent with the appearance as there is no obvious evidence of fusing and the rock appears loosely assembled.

OK, one of my research colleagues was able to translate the from the Youtube videos. Here’s a summary of the facts:

1. There is an ovoid zone 600 m top to bottom, 100 m beneath the centre of the crater which has abnormally high conductivity. It lies directly on the axis of symmetry of the crater.

2. There is high radioactivity in the area surrounding the crater.

3. The crater has a diameter:height ratio of 3:1. Typical ‘impact craters’ have a ratio of ~ 10:1. Accordingly, the Russians have not classed the object as an impact crater.

4. There are trees growing on the outer aspect of the crater which are 236 years old by dendrochronology. So, no, it has nothing to do with Tunguska.

5. The site was first reported in 1946. However, local people call the hill ‘nest of the fire eagle’. It is not clear how old this name is.
tayga

Just thought I'd belatedly throw in with the observation that that's reasonably close to the beautiful ring at Zheltukta (and other surrounding ring structures large and small):
59.510636,114.843121

All part of the same general event, I'd guess, and if not - provided we're reasonably certain there's a wild difference in ages - then perhaps not part of the same event, per se, but caused by the same thing...

Preaching to the choir, I know, but I thought it worth noting.
Shelgeyr
Sometimes I feel like a tiger’s got my leg...
Top

The image of Crater Field, Arizona is an area that was mocked up to look like the surface of the moon. It was used for the Apollo astronauts to train for the Moon landings.

Cheers
"Emancipate yourself from mental slavery, none but ourselves can free our mind."
Bob Marley
Top

You know, I looked at this thread before but didn't see. This "patomsky crater" reminds me of what happens when frost gets into cement or plaster in certain situations. I've seen badly laid cement extruding itself for days afterwards. You get a similar effect in any sort of aggregate in the right conditions, with the frost forcing out a bulb of that repeatedly rises and falls as the forst expands and contracts, producing a very distinctive shape. Never seen it on that sort of scale before.
Top

Mr. Yelverton talks alot about the cellular structures he created as posted in Space News recently

The walls on the side of the Siberian craters look VERY cellular and suspicious considering main stream explanations for the formation of these craters. 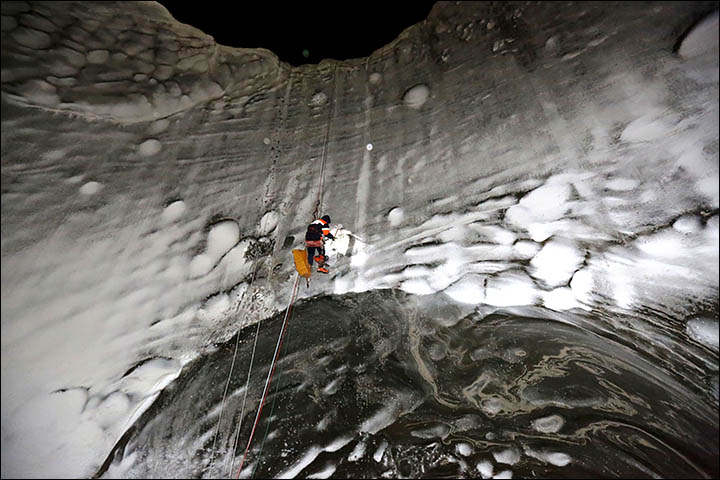 Final image to large to post below. Electrical? Methane? Pingoes?