Re: Type of close encounter to cause Valles Marineris on Mar

--can be taken to 14 orders of magnitude, according to EU articles. It's all speculation, but it gives some numbers.... 
It's apparent from the supplied supplemental information, that Relative elevations are being recorded,
but are Absolute elevations being measured ?
Does anyone know ?

It would be nice to know if any orogeny is taking place here.

Hello everyone.
I'm not sure whether I shoud have started this topic at all, but I think it's worth it.

US Geological Survey published yesterday what they've called the geological map of Mars in pretty good resolution and with an impressive legend and periodization: http://pubs.usgs.gov/sim/3292/
Any thoughts on that?

What I personally think is that they don't have that much data to make such conclusions (to chart everything in that detail and with such confidence).
For example, they don't have any real drilling data (those 10cm Curiosity holes - or to what depth they were - doesn't count), they only have "morphologic, topographic, spectral, thermophysical, radar sounding, and other observations", i.e. only visual and other photonic. There weren't even a decent seismological (seismoacoustical) studies been made. Or there were?
Top


The iron meteorite discovered by the Curiosity rover must once have been at the heart of a growing planet that was shattered aeons ago. 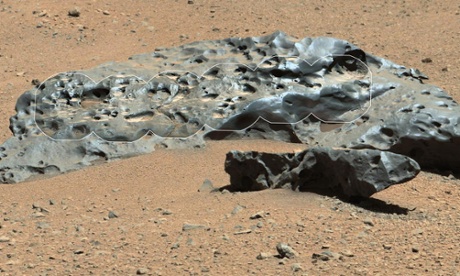 MUST have been at the heart of a growing planet??
So what would be the terminal velocity of an object such as this on Mars? I'll estimate 5-600 MPH, so where is the crater? It eroded away?
In order to change an existing paradigm you do not struggle to try and change the problematic model. You create a new model and make the old one obsolete. -Buckminster Fuller
Top

GaryN wrote:where is the crater? It eroded away?

I was also wondering about that, and one of the mainstream guys said that yeah, probably it eroded and as an example he mentioned the Hoba meteorite on Earth.
But given its close resemblance to this martian thing I instead start to think that both Hoba and this one were the results of some wicked discharge event...
Top


August 12, 2014: On October 19, 2014, Comet Siding Spring will pass by Mars only 132,000 km away--which would be like a comet passing about 1/3 of the distance between Earth and the Moon.
The nucleus of the comet won't hit Mars, but there could be a different kind of collision.
"We hope to witness two atmospheres colliding," explains David Brain of the University of Colorado's Laboratory for Atmospheric and Space Physics (LASP). "This is a once in a lifetime event!"

Comets have "atmospheres" to apparently ....

Looks like its up to each individual to assign the relationship with the possible Auroral event with the Electrical phenomena themselves,....

The atmosphere of the comet includes not only streamers of gas, but also dust and other debris

Meteoroids disintegrating would deposit heat and temporarily alter the chemistry of upper air layers. The mixing of cometary and Martian gases could have further unpredictable effects.http://science.nasa.gov/science-news/sc ... marscomet/

Wal Thornhill did an interesting talk on the MAVIN Mission ---> https://www.youtube.com/watch?v=xoY2s3l ... qRosK4tWYA

It seems obvious that interplanetary thunderbolts scarred planets etc. in our sun system.
However, after some research I could not find any information concerning the potential amperage, voltage, wattage or kwh during these interplanetary electric discharges!

Did I miss something? Then please, point me to a related thread or source!

However, if there was never talk about related data of electric discharges then the EU community would have a serious problem. How could one convince other people to accept thunderbolts of the gods if the most basic numbers are not provided? Most physicist will not even listen to EU followers if they can not provide any related rule-of-thumb estimate! It is a big handicap in discussions.

There is no higher math or any unworldly black hole computing required - therefore we have no excuse for lacking numbers in this field. And if Valles Marineris was created by a discharge or discharges then one should draw conclusions about the necessary W (work) to excavate the valley.

One can not avoid numbers all the time. IMHO a lack of related calculations and estimations would be inexcuseable!

Therefore I hope for some enlightening answers.
Top

i do not think that there is anything that could be described as a mathematical model. However, if you are looking for some calculations I would check out the works of Ralph Juergens, who was an electrical engineer inspired by Velikovsky. Juergens wrote many articles on cosmic electricity. Many are available on line and you might find what you are looking for there.

The dynamics of plasma are more complicated than fluid calculations, and there is some
non-linear dynamics involved.
That is the reason why stuff like "magnetic reconnection" exists in the mainstream, because they
oversimplified plasma dynamics to the point that it does not follow the laws of
electromagnetism any more.
The fact that a lot of scientists believe in this physics-conflicting theory,
shows how complicated this stuff really is.

We can also look at the observations.
The dynamics of electric currents is visible in auroras, which we can see in the sky and on other planets.
There seem to be alternating layers of charged particles. Positive and negative, sometimes forming
some kind of spiral in the middle. Also hexagonal shapes appear.
The hexagonal shape seems related to some kind of resonance frequency of the plasma.

Because the currents uses different layers of particles, they can reach large distances without
losing much power. The different layers are likely to circle around each other, hence
forming the spiral pattern.

The sun is a very interesting object to study.
Maybe we can find the electric parameters involved?
Let us see the fiery loop as an example.
See this video.
In this video we see an enormous ring of plasma, stable above the sun's surface.
The only force doing this is electromagnetism.
Gravity is pulling it down, but it lasts almost forever.
From "nowhere" new material appears falling in the ring. This material comes from dark mode plasma.

In this video the voltage on the sun is strong enough to keep material about 40000 km above the surface.
While we can see that the electric powers are enormous, it is hard to see calculate
the actual voltages are.

If we assume that one proton is held up by the electric force,
we can estimate the charges involved.
electric F= E0*q*Q/r²
gravity F= G*m*M/r²

I don't know if this is correct, but it seems huge indeed.
More ** from zyxzevn at: Paradigm change and C@
Top

Thanks for the links and the cool sun video!

It seems I had completly forgotten Juergen's papers which I had downloaded a long time ago. The decisive sentence says - in relation to the creation of Aristarchus on the moon: "So we are talking about an interplanetary discharge a few million millions as energetic as ordinary lightning on earth."

Already common lightning on Saturn seems to be 10^3 to 10^4 times stronger than lightning on earth. So I don't wonder about 10^12 times stronger lightningbolts and more. However, Big Bang astronomers and their followers will probably claim that such electrical events are impossible in our sun system (and believe in mysterious black holes at the same time).

Or did anybody see calculations for the Thunderbolts of the Gods from more recent times?
Top

Alongside the "blueberries" phenomena that seems to be discussed quite a bit, there is another phenomenon on the surface of Mars that is very unusual and interesting but doesn't seem to get a lot of mention either in mainstream science or EU circles. In fact generally the only discussions I can find about them are from the alien hunting fraternity who seem to think they are intelligently designed, but I'd like to explore an EU causation. Does anyone know much about these ribbed anomalies or have any ideas as to how they may have been formed? They remind me of blown glass, so I was wondering if they could have been created by plasma discharges causing sand to turn into these glasslike shapes. If so, could they provide more evidence for the EU model?

Thanks Nick. Being inexperienced it took me a while to see the resemblance, but I think I understand how the "filaments, braids and cords" on your image might correspond in some way to the "ribs" on my images.
Top

The OP's photos remind me of the "bead" formed by arc welding. At least as viewed from a long distance.
Top
Locked
155 posts