I stumbled across this piece, did anyone already mentioned this article on the forum?

Space may appear empty -- a soundless vacuum, but it's not an absolute void. It flows with electric activity that is not visible to our eyes. NASA is developing plans to send humans to an asteroid, and wants to know more about the electrical environment explorers will encounter there.

A solar wind blown from the surface of the sun at about a million miles per hour flows around all solar system objects, forming swirling eddies and vortices in its wake. Magnetic fields carried by the solar wind warp, twist, and snap as they slam into the magnetic fields around other objects in our solar system, blasting particles to millions of miles per hour and sending electric currents surging in magnetic storms that, around Earth, can damage sensitive technology like satellites and power grids.

-
NASA-sponsored researchers funded by the Solar System Exploration Research Virtual Institute (SSERVI) (formerly the NASA Lunar Science Institute (NLSI)) have developed a new computer model that can predict and visualize the interaction between the solar wind, solar radiation, and the surface of asteroids in unprecedented detail.

Previous "grid-type" models are less efficient at calculating the effects of solar activity on complex surfaces like asteroids because they devote computer resources equally to all areas, according to Zimmerman. His new "tree code" model continually adapts to the flowing plasma, applying the most resources to areas with lots of complex activity, while devoting less to areas that are simpler.

"For example, understanding the electrical environment around an asteroid could help identify locations where astronauts can safely make first contact with the object," said co-author William Farrell of NASA's Goddard Space Flight Center in Greenbelt, Maryland. "If an astronaut is tethered to a spacecraft that is in sunlight and positively charged, and touches a negatively charged asteroid surface in shadow, there could be an unexpected current flow between the two systems upon contact. We simply can't speculate on the nature of that current without this model."

The model also can be used to predict interactions between an asteroid and the spacecraft itself. "One of the reasons we're visiting asteroids is because they are relatively pristine remnants from the formation of the solar system, so they give clues as to how the planets formed and life originated," says Farrell. "However, spacecraft release gases (like water) that ionize, and these spacecraft-emitted ions likely will contaminate the surfaces of the asteroids we want to study. This new asteroid model will allow us to estimate the degree of ion collection and contamination over various regions." Farrell is the Principal Investigator of one of SSERVI's nine teams called the Dynamic Response of the Environment at Asteroids, the Moon, and moons of Mars (DREAM2), which provided a portion of the funding to develop the model.
-

"Eventually, we also plan to expand the capability of the model by making predictions and visualizations in three dimensions, as well as adding the capability to simulate electrically conductive exploration infrastructure as well as magnetic field effects," says Zimmerman.

This research was supported by an appointment to the NASA Postdoctoral Program at Goddard, administered by Oak Ridge Associated Universities through a contract with NASA. It also was supported by the NLSI and SSERVI, based and managed at NASA's Ames Research Center in Moffett Field, California.

It's pretty cool, however this:

A solar wind blown from the surface of the sun at about a million miles per hour flows around all solar system objects, forming swirling eddies and vortices in its wake. Magnetic fields carried by the solar wind warp, twist, and snap as they slam into the magnetic fields around other objects in our solar system, blasting particles to millions of miles per hour and sending electric currents surging in magnetic storms that, around Earth, can damage sensitive technology like satellites and power grids.

Yes, charges tend to follow the magnetic field topology, but there is no interaction between magnetic fields like the article suggests (magnetic storms, snapping and slamming and so on)! The solar win blow charges (plasma) into space. The charges hit the particles of the object in question and increases it's electrical potential. On earth when the particles hit the Ionosphere it creates an uneven distribution of charge in the atmosphere. The uneven charge distribution between ionosphere, lower atmospheric layers and ground is attempting to equalize and so, in short, it manifests as storms, earthquakes and lighting strikes.

NASA hasn't come around. They're still hocking the "pristine remnants from the formation of the solar system" mantra.
Top 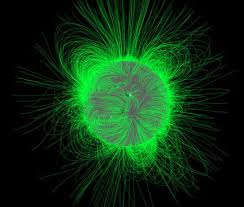 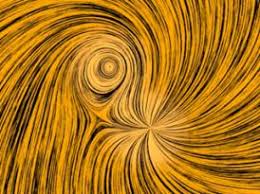 Of course the magnetic fields are there, but the fields them selves can't interact with each other creating the phenomena they suggest in the article.


slam into the magnetic fields around other objects

The field basically only store energy in the topology like a stretched rubber band, but it can't do any work. The reason they get large energy potentials in the first place (like on the sun) is because there is crazy strong plasma current's flowing. The field lines is in your pictures are only a an abstract representation of the reality, like a map has topological lines to indicate steepness. Imagine a ball rolling down a hill. You wouldn't say, knowing something about forces, that the ball is rolling down because the direction and downwardness (magnitude) of the hill is acting upon the ball to move it. No you would say that the topology of the hill allows the force of gravity to move the ball down the hill.

Just like the ball, a charge in a magnetic field is enabled to flow because the vector space topology of the field has the properties of direction and magnitude. It's basically a configuration created by flowing electric charges and you can't decouple one from the other.

The reason I'm saying all this is that it seems like astronomers have a tendency to make up phenomena like "magnetic storms", "magnetic reconnection" or any odd thing regarding magnetism because they misconstrue the nature of the field.
Top

If only NASA could back up what they say, and quit pretending gravity is important. They don't know if enough electricity is there to literally vaporize an astronaut who simply touches an asteroid. NASA also says they can't detect it, but falls for the phony gravity waves matching cosmic dust. With moving electric charges everywhere in space, institutional cosmology is a scam. Maybe social security does not want to pay their retirements, so all governments keep funding their dark matter and dark energy studies, instead of telling them "no more fake lying pretending dark matter money for you."
Top

quantauniverse wrote:institutional cosmology is a scam. Maybe social security does not want to pay their retirements, so all governments keep funding their dark matter and dark energy studies, instead of telling them "no more fake lying pretending dark matter money for you."

The solution would be very simple if it were all a scam, like anthropogenic global warming. Unfortunately, even AGW has believers competent enough to know better. Cosmology is more complicated still. Old paradigms that seem hopelessly outdated in the light of new data will fall hard because that's the nature of science. That's actually a good thing. Existing models should have some staying power. If they didn't, they were probably ill-conceived in the first place.

Old science becomes a problem when it hardens into dogma, as detailed by Henry Bauer in DOGMATISM IN SCIENCE AND MEDICINE. Some (but not all) who "know better" may continue to defend old science because of what they stand to lose if it is overturned—professional stature, grants, etc. Eisenhower warned of this in his "military-industrial complex" farewell speech. The public face of the problem is that "science" is no longer the empirical search for truth that we are all taught it is. But one cannot appeal to the public because "they don't know enough to decide" (a statement both sarcastic and realistic at the same time).

"Science" must sweep out its own tent. As pointed out by many others, peer review is just one factor that should be modified. It was intended as a tool to keep science focused, but has the side effect of being an "old boys" society. One remedy endorsed by Gerald Pollack is the Institute for Venture Science—support for the "fringe" stuff. Put serendipity back into science.

As for NASA, they haven't been relevant since the Apollo program ended. Once upon a time they directed one of the more awe-inspiring engineering efforts of the 20th century, but somehow that's been translated into cred as a "scientific authority." Private enterprises are already well poised to replace the engineering. If Ronald Reagan is correct, NASA is immortal, no matter how absurd they appear.
Top

Oh my gosh even medical science has dogmatists, better find your own doctor to trust who does things right
Top

I disagree. They see that the EU paradigm is getting stronger, and they can see the writing on the wall. So they're moving in this direction. Of course, if we stop, they'll stop. They'll only shift their position if they are forced. So we have to keep forcing.

But the other implication here is that if you want a piece of the action, you'd better hurry. If you sit on the sidelines, you'll be able to tell your grandchildren that you saw this whole thing unfold in real time. But if you get out on the field and get your shirt dirtied, you'll be able to tell your grandchildren that you were part of the largest scientific revolution since Newton. So if you've been thinking about getting more involved, now is the time.
Give a man a fish and you feed him for a day. Teach a man to fish and he'll spend the rest of the day sitting in a small boat, drinking beer and telling dirty jokes.

any odd thing regarding magnetism because they misconstrue the nature of the field.

What is the basic nature of a magnetic field? It is a force, but what conveys that force?
"It is dangerous to be right in matters where established men are wrong."
"Doubt is not an agreeable condition, but certainty is an absurd one."
"Those who can make you believe absurdities, can make you commit atrocities." Voltaire
Top

I disagree. They see that the EU paradigm is getting stronger, and they can see the writing on the wall.

You are both correct. NASA has "double layers" (pun intended). There are the theorists and the practical scientists/engineers. I think most of the theorists are quite happy with math models of black holes and dark matter. The engineers have practical concerns and deal with electric currents in space in their spacecraft design and everyday operation.

On another note, I can remember only a few years ago NASA press releases never mentioned the E word. Now that has changed.

I am sure that when Don Scott spoke to NASA Goddard there were those in audience that brought their barf bags, but perhaps some seeds were planted in the more open minded.
see:
https://www.youtube.com/watch?v=t8tqgnt ... 2EA70D493D
Top
Locked
11 posts • Page 1 of 1