Re: NASA * MYSTERY OF THE LUNAR IONOSPHERE

Airless Moon Has Ionosphere
Post by Lloyd » Tue Nov 15, 2011 7:52 pm
* It's considered quite strange that the Moon could have an ionosphere, when it has almost no air. See http://science.nasa.gov/science-news/sc ... onosphere/.
* But, if the Moon's surface is charged, I guess positive, then the dust particles on the surface would repel each other and a little solar wind, also positive, could probably easily shoot some of them into lunar orbit, thus producing one ionosphere.
* One Thunderbolter suggests the Moon's ionosphere may be the remnant of a former dusty ring, I assume similar to Saturn's rings and others. Such rings were possibly produced from proto-Saturn flares, over 10,000 years ago.

* Oops! It also once had a magnetic field. See http://www.nytimes.com/2011/11/15/scien ... -stir.html.
* The Moon's former magnetic field likely existed during the Saturn Age, when it was very possibly a moon of Saturn.
Top

.
Solar Storms Could 'Sandblast' the Moon


"We found that when this massive cloud of plasma strikes the moon, it acts like a sandblaster and easily removes volatile material from the surface," said William Farrell, DREAM team lead at NASA Goddard. "The model predicts 100 to 200 tons of lunar material – the equivalent of 10 dump truck loads – could be stripped off the lunar surface during the typical 2-day passage of a CME."

The team used data from satellite observations that revealed this enrichment as input to their model. For example, helium ions comprise about four percent of the normal solar wind, but observations reveal that during a CME, they can increase to over 20 percent. When this enrichment is combined with the increased density and velocity of a CME, the highly charged, heavy ions in CMEs can sputter 50 times more material than protons in the normal solar wind. I think that's admitting EDM.
Sputtering that is...


The moon has just the barest wisp of an atmosphere, technically called an exosphere because it is so tenuous, which leaves it vulnerable to CME effects. The plasma from CMEs impacts the lunar surface, and atoms from the surface are ejected in a process called "sputtering."

* Oops! It also once had a magnetic field. See http://www.nytimes.com/2011/11/15/scien ... -stir.html.
* The Moon's former magnetic field likely existed during the Saturn Age, when it was very possibly a moon of Saturn.Lloyd
How can go by what those idiots come up with. They would not have the faintest idea about whether the Moon had a magnetic field or not.
Mo
Top

I post a link to this pic of a boulder rolling on the moon just for fun: perhaps there is some EU relevance here.

To the far right of the boulder is a much smaller one with a similar trail behind it (which can only be seen if you click on the pic for a higher resolution pic). It sits among "grooves" that EU proponents would say were caused by electric discharges.
Top

That boulder must be hopping along, there are places where the ground has untouched segments.
Or maybe it bounced along and came to a dead stop? Parts of the trail also have 'craters'
newer than the trail, so maybe it happened a long time ago? Interesting image!
In order to change an existing paradigm you do not struggle to try and change the problematic model. You create a new model and make the old one obsolete. -Buckminster Fuller
Top

If this boulder "rolled" then it must be oblate and someone must've been pushing it for quite a ways... and I don't see any footprints.

I don't think the full physics of what occurred in this image has been explored yet. o.O
Mike H.

* They say it's on a slope, and, since you can see the boulder at the end of the track, I think it very likely is the track of a boulder. It looks very similar to crater chains, but there are differences, I believe, and crater chains are probably much more common than such tracks.
http://lroc.sese.asu.edu/news/uploads/L ... yThumb.png

Here's an oldie showing a boulder on what looks like a pretty good slope. Perhaps the low gravity
means that a little momentum and it would start bouncing, and leaving the un-depressed segments?
Seems to make sense.
http://thomasbrown.org/Lunar/rollbol2.gif
In order to change an existing paradigm you do not struggle to try and change the problematic model. You create a new model and make the old one obsolete. -Buckminster Fuller
Top

New images from NASA's Lunar Reconnaissance Orbiter (LRO) spacecraft show the moon's crust is being stretched, forming minute valleys in a few small areas on the lunar surface. Scientists propose this geologic activity occurred less than 50 million years ago, which is considered recent compared to the moon's age of more than 4.5 billion years.

A team of researchers analyzing high-resolution images obtained by the Lunar Reconnaissance Orbiter Camera (LROC) show small, narrow trenches typically much longer than they are wide. This indicates the lunar crust is being pulled apart at these locations. These linear valleys, known as graben, form when the moon's crust stretches, breaks and drops down along two bounding faults. A handful of these graben systems have been found across the lunar surface.

It was a big surprise when I spotted graben in the far side highlands," said co-author Mark Robinson of the School of Earth and Space Exploration at Arizona State University, principal investigator of LROC. "I immediately targeted the area for high-resolution stereo images so we could create a three-dimensional view of the graben. It's exciting when you discover something totally unexpected and only about half the lunar surface has been imaged in high resolution. There is much more of the moon to be explored."

Moon stretching? Moon growing or shrinking? EDM or something similar?
Everything is Electric?
Top

This is the only image that was small enough to post here.

Larger image.
"It is dangerous to be right in matters where established men are wrong."
"Doubt is not an agreeable condition, but certainty is an absurd one."
"Those who can make you believe absurdities, can make you commit atrocities." Voltaire
Top

Lunar Schiller crater
Associates mentioned that the above image comes from this film strip: http://wms.lroc.asu.edu/lroc_browse/view/M109502471L.
You can see several boulder trails. On the most zoomed out smallest image of the strip, look for the large crater about 1/3rd of the way down. Zoom in on the right side of the strip just above the bright bottom portion of the crater. Then pan up from that area to find several boulder trails. Some larger boulders appear to have broken up after coming to rest. It also looks like some of the trails were made before some of the craters formed.
Mars
They also mentioned that there are some boulder trails on Mars too, like these at Cerberus Fossae near Elysium Mons.
http://images.spaceref.com/news/2012/oo ... hi-res.jpg 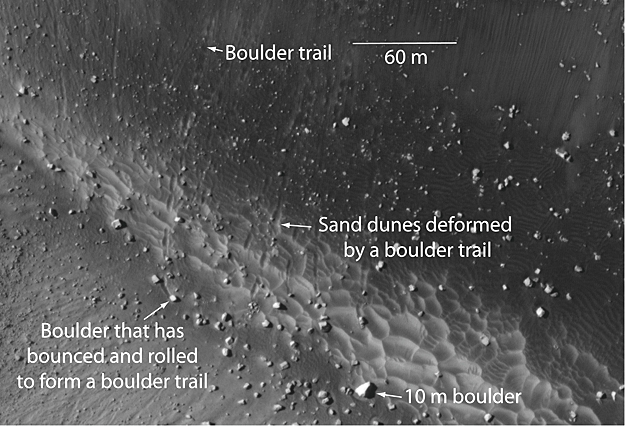 * The dislodged boulders are considered to be evidence of marsquakes.

The existence of marsquakes could be significant in the ongoing search for life on Mars, the researchers stated. If the faults along the Cerberus Fossae region are active, and the quakes are driven by movements of magma related to the nearby volcano, Elysium Mons, the energy provided in the form of heat from the volcanic activity under the surface of Mars could be able to melt ice. The resulting liquid water, they noted, could provide habitats friendly to life.

* EU theory suggests that volcanism on Mars is unlikely.
Top

These are meteors that had small speed difference to the moon and came to a soft, rolling impact....

* Here's an interesting one. It looks like the rock slid and then parallel lines of sand covered the trail intermittently.
http://4.bp.blogspot.com/-HzoOkFtxdVo/T ... 80x800.png
Top

If we could solve the " Death Valley moving boulders" (search) maybe it would help with the ones on the Moon!