Well before this thread gets moved, I have two observations:

Firstly, there's a definitive rotation around the pole.

Secondly, there's an obvious black spot in the center of the cloud formation. It seems at times to take on a hexagonal shape, much akin to the to 'polar storms' (moniker courtesy the brilliant boys and girls at NASA) found on the other heavy atmosphere planets they've investigated so far.

It's already been pointed out by Mr. Thornhill that a characteristic of Birkland currents is hexagonal lobing- seen at the poles of the heavy atmosphere planets and many hexagonally-shaped craters on Mars, Mercury, and many moons in our solar system.

I think that clinches the 'electrical connection' quite nicely- those clouds are a layer of plasma in the high atmosphere entering glow mode, most likely co-related to the new solar cycle.

That's my take on it, anyway. I have no proof, I'm a layman, and I can think however I wanna!

there's an obvious black spot in the center of the cloud formation.

I think the black area is created by the radar sweeps i.e. they didn't retrieve any information from that area, rather than there being no info....if you know what I mean.

Were these CGI's based off of ground-based radar, or an animation from satellite imagery?
Mike H.

At an altitude of about 85 km, well below the orbiting ISS, there's a fascinating example of a naturally occurring dusty plasma: the so−called noctilucent clouds. These "night−shining" clouds, seen at high latitudes in the early summer months, are composed of ice crystals. The clouds form in the polar mesosphere, where temperatures can get down to 100 K. At this lower reach of the ionosphere, free electrons can attach to the ice particles (typically 50 nm across) to form a dusty plasma.

Noctilucent clouds are perhaps related to observations of unexpectedly strong radar echoes from the polar regions.16 The enormous backscatter cross section observed in the summer mesosphere came as quite a surprise to radar scientists. Models have been developed to relate charged dust to localized ionization and electron depletions that would result in upper−atmosphere inhomogeneities strong enough to account for the abnormal radar echoes. But there is, as yet, no consensus. Curiously, there has been an increase in the observed frequency of the noctilucent clouds over the past 30 years. The increase may be caused by rocket engine exhaust, which is mostly water vapor. Water vapor released at very high altitudes tends to collect near the poles.


Planetary scientists have discovered the highest clouds above any planetary surface. They found them above Mars using the SPICAM instrument on board ESA's Mars Express spacecraft. The results are a new piece in the puzzle of how the Martian atmosphere works.
Until now, scientists had been aware only of the clouds that hug the Martian surface and lower reaches of the atmosphere. Thanks to data from the SPICAM Ultraviolet and Infrared Atmospheric Spectrometer onboard Mars Express, a fleeting layer of clouds have been discovered at an altitude between 80 and 100 kilometres. The clouds are most likely composed of carbon dioxide.

At 90–100 kilometres above the Martian surface, the temperature is just –193° Celsius. This means that the clouds are unlikely to be made of water. "We observe the clouds in super-cold conditions where the main atmospheric component CO2 (carbon dioxide), cools below its condensation point. From that we infer that they are made of carbon dioxide," says Montmessin.

But how do these clouds form? SPICAM has revealed the answer by finding a previously unknown population of minuscule dust grains above 60 kilometres in the Martian atmosphere. The grains are just one hundred nanometres across (a nanometre is one thousand-millionth of a metre).

They are likely to be the 'nucleation centres' around which crystals of carbon dioxide form to make clouds. They are either microscopic chippings from the rocks on the surface on Mars that have been blown to extreme altitudes by the winds, or they are the debris from meteors that have burnt up in the Martian atmosphere.

http://www.thunderbolts.info/forum/phpB ... 7020#p7020
The illusion from which we are seeking to extricate ourselves is not that constituted by the realm of space and time, but that which comes from failing to know that realm from the standpoint of a higher vision. -L.H.
Top

Aurora and the Equinox

I get the feeling that their favorite catch phrase, dispite always sounding so sure of themself and having itching ears for only black holes and solar gas storms....is this

"This is an area of active research," "We still don't have all the answers because it's a complicated problem."

Yet they act like they enough answers to know what they are talking about.

I feel that geometry of spin is highly involved in the Equinox being a period of intense Aurora. I am trying to catch it in my minds eye. I get the impression of a magnifying glass effect based on the halfway tilt...in a conjugative phase relationship, that allows the Birkeland charge magnetic tubes to connect and create the intense Equinox Aurora. Some form of a scalar or soliton must be involved to create the charge geometry for the intense birkeland tube activity.

Any clues as to the change in variability of the aurora during the spring and fall equinox?
If you only knew the magnificence of the 3, 6 and 9, then you would have a key to the universe.
— Nikola Tesla
Casting Out the Nines from PHI into Indigs reveals the Cosmic Harmonic Code.
— Junglelord.
Knowledge is Structured in Consciouness. Structure and Function Cannot Be Seperated.
— Junglelord
Top

A new experiment called the Charged Aerosol Release Experiment (CARE) employs the release of dust in the upper atmosphere to form a dusty plasma in space. Two solid rocket motors strapped side-by-side in opposition will provide a pin-wheel high speed dust dispenser for the CARE experiment. A spherical dust cloud will form as a radial expansion around the CARE dust release module. The release will occur between 200 and 250 km altitude in the F-region where the 10 to 1000 nm diameter particles will become charged by electron attachment. As the charged dust particle stream through the ionosphere, plasma irregularities will be produced by streaming and fluid plasma instabilities. The plasma turbulence will driven by large electric fields at the surface of the cloud resulting from the separation of unmagnetized negatively charge dust from the background positive ions which are tied to magnetic field lines. In addition, two stream instabilities from the charge particles moving through the plasma will cause plasma wave structures. The effects of the CARE dust release will be diagnosed with in situ electric field booms, dust detectors, and Langmuir probes. Remote sensing of the CARE release will involve ground backscatter radars in the HF, VHF, and UHF frequency ranges. At late times, the dust cloud will settle into the mesosphere where an artificial mesospheric cloud will be formed. Satellite imagery using the AIM satellite will measure the long-term dispersal of the artificial dust cloud. The results of the CARE experiment will be compared with radar, optical and rocket measurements of natural polar mesospheric clouds.

Wonder if anyone has had time to reflect on this press release from NASA:-

By examining many collisions, Lyons and Nishimura have identified a common sequence of events. It begins with two elements: (1) a broad curtain of slow-moving auroras and (2) a smaller knot of fast-moving auroras, initially far apart. The slow curtain is quietly glowing over the Arctic when the speedy knot rushes in from the north. The two auroras collide and an eruption of light ensues.

How does this sequence connect to events in the plasma tail?

"It took some creative thinking to come up with an answer, but I believe this team has done it," says THEMIS project scientist Dave Sibeck of the Goddard Space Flight Center.

Lyons believes that the fast-moving knot is associated with a stream of relatively lightweight plasma jetting through the plasma tail. The stream gets started in the outer regions of the plasma tail and moves rapidly inward toward Earth. The fast knot of auroras moves in synch with this stream.

Meanwhile, the broad curtain of auroras is quietly hanging over the Arctic, gently glowing, more or less minding its own business. This curtain is connected to the stationary inner boundary of the plasma tail and is fueled by plasma instabilities there.

When the lightweight stream reaches the inner boundary of the plasma tail—bang!--there is an eruption of plasma waves and instabilities. This collision of plasma is mirrored by a collision of auroras over the poles.

I can explain it in even simpler terms....double layers. Plasma makes plasma sheaths, double layers, with significant charge seperation b/t those layers....when these double layers reconnect...BANG Z Pinch effects.
If you only knew the magnificence of the 3, 6 and 9, then you would have a key to the universe.
— Nikola Tesla
Casting Out the Nines from PHI into Indigs reveals the Cosmic Harmonic Code.
— Junglelord.
Knowledge is Structured in Consciouness. Structure and Function Cannot Be Seperated.
— Junglelord
Top

Ok, I got it - thanks for the reply. You would have thought that NASA could have done this years ago as its not that technical a feat to achieve however, if you don't look you can't find. Typical of those how refuse to take the electric universe seriously within closed cloisters
Top

'Jellyfish' in the aurora is a petroglyph-like phenomena I'll have to re-reference Physics of the EU when I get home to see where this thing may have happened within the polar double-layer. I'm guessing it was quite a short phenomenon - just an hour or less - if no one else documented it. The sun has still be quite quiet, if I recall. Unless we passed through a 'dense cel' that was in our orbit, this the appearance of a petroglyph-like plasma event would speak to the relationship of these to the solar cycle.

My thoughts,
it looks remarkably like some distant galaxies, and brings to mind the scalability of plasma phenomena.
Obviously there is plasma around, from the aurora, but what creates the pinch to cause it? Perhaps the preferred theory of a reflection from an Iridium satellite is correct, but would a reflection of light cause this, or a different energy?
Top

It reminds me of these: 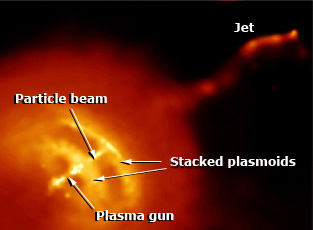 If you look at the top of the aurora phenomena there is a slightly red looking jet above it as well but hard to tell with such a grainy image.
Top