....we know that magnetic fields do not stand alone, they are created by electric currents.

Or aetheric currents, in the case of permanent magnets.

hi seasmith,
do you propose that the Earth is a permanent magnet?

I don't know.
I think 'permanent' magnetism is basically strong residual magnetism and a consequence of a receptive atomic/crystalline structure. Eventually the structure naturally becomes more anisotropic and chaotic, as rock eventually becomes dust, and the harmonic receptivity begins to fade.
IF, the earth has a substantial iron alloy inner section, then perhaps some residual effect is fading.
Perhaps it will someday incur another strong biasing effect.

As to the "oceans effect", it's an intriguing idea and ~for other planets, the fluid involved would not necessarily have to be saltwater.

Ok, the Earth has a relatively strong dipolar magnetic field (or at least it used to), and other planets show 'negligible' magnetic fields, correct?
I have also heard that Mars has "many magnetic poles" vs just two- that was a long time ago, I have no idea where I heard it, and I can't quote it from anywhere BUT it made me think of something...

We know that the Sun is bipolar, so is the Earth, and most of the large planets. Some smaller bodies (Mars, Venus, moons) are not bipolar.

Might this be caused by how the current flows through the body of the object in question, rather than it's composition? If the body routed current through it'self via say a half-dozen major pathways, would that cause the body to not display the homopolar motor configuration, but rather what we see with Mars wherein its magnetic fields appear spotty across its surface? Is there another model (other than the homopolar motor model) that could explain planetary magnetic field observations, just as it does galactic observations (i.e. globular cluster galaxy vs barred spiral galaxy)?

Or more simply- has anyone looked at electrical conduction as an explanation of the observations rather than material composition, to explain the magnetic phenomena?

Or more simply- has anyone looked at electrical conduction as an explanation of the observations rather than material composition, to explain the magnetic phenomena?

I don't believe the two can be separated.

For instance- you can run current through aluminum and create an electromagnetic field, same with copper... but they'll never pick up a residual magnetic field, right?
Or can it under certain circumstances? I thought you'd have to dope it with ferrous metal or create an alloy?

Go easy on me- I've been out of school a loooooong time!

Well, I've never seen marine light wheels discussed anywhere on these forums, or on any other of the EU-related web sites either, for that matter. But, the possible relationships with twisting filamentary ion currents from space, and the like, are tantalizing to say the least. I wonder, for example, if the wheels tend to have about 56 or 28 spokes, as Anthony Perratt sees in his plasma simulations...

Thought this might be interesting to the group. I had network problems the other day and somehow happened to find this article on the NOAA site while trying to check the weather forcast.

Tsunamis send electric signals through the ocean that appear to be sensed by the vast network of communication cables on the seabed, according to a new study led by Manoj Nair of the University of Colorado and NOAA.

Nair and his colleagues used computer models to estimate the size of an electric field created by the force of the 2004 Indian Ocean tsunami as it traveled over major submarine cables. Salty seawater, a good conductor of electricity, generates an electric field as it moves through Earth’s geomagnetic field.

“We estimate that the 2004 tsunami induced voltages of about 500 millivolts (mV) in the cables. This is very small compared to a 9-volt battery, but still large enough to be distinguished from background noise on a magnetically quiet day,” Nair said. “By monitoring voltages across this network of ocean cables, we may be able to enhance the current tsunami warning system.”

Very cool. a half volt is 1/18 of a 9V battery, or about 5%, so that seems detectable enough. One wonders if cables near a subduction area where tsunamis might be generated could pick up any electrical consequences of crustal rock slipping or compressing suddenly, giving an initial warning more quickly than do seismometers a long way off.
Top

Question; are earthquakes electrically induced? Or does the enormous tension in the ground produce electric charges?
Today's scientists have substituted mathematics for experiments, and they wander off through equation after equation, and eventually build a structure which has no relation to reality. -Nikola Tesla -1934
Top

I was just wondering about that. Could a charge release from the deep passing through the fault area cause repulsion between the plates at either side, reducing friction and allowing what lateral mechanical stresses might be present to be released easier and perhaps faster? Quake lights are seen for up to a few hours before an event, so is that a piezo-electric build up from stress in the rocks, or an electrical build up from charge migration of a dielectric breakdown somewhere below?
In order to change an existing paradigm you do not struggle to try and change the problematic model. You create a new model and make the old one obsolete. -Buckminster Fuller
Top

Given the concurrence of tectonic activity with cyclic alignment of solar system components, as per Ray Tomes and others, and the negligible purely gravitic component in calculations involving those distances; it would seem more likely that both the quaking and the solar system alignments are signature of the subsuming 'field' patterns.

I can't explain the physics of it, but something in my subconscious strongly suspects that 'fault lines' in the Earth as well as 'volcanic zones', and even 'tornado alleys' are simply different expressions of telluric-to-atmospheric current paths.

- If one considered how a dielectric might respond to a sudden increase in current (or even a slow build-up to an explosive release- like a DL blowing up), that might explain the phenomenon that we call an 'earthquake'.

- If one considers the definition of a 'dielectric':

(ARTICLE from the Encyclopædia Britannica)

I would also expect to see very large jumps in subterranean heat in the fault zone as the current dissipated some of the power as thermokinetic energy to propogate through the dielectric (rock/water table/etc).

- This might also explain vulcanism. More current in a 'fault line' might actually melt the dielectric (soil, rock, etc) resulting in the 'magma' we see in volcanic areas. There are always tremors and whatnot in conjunction with vulcanism, isn't there?

(On a side note- I was thinking back to Wal Thornhill's musings on 'electric gravity', I wonder if we wouldn't see a sudden dip in G above a strong earthquake? Might explain some of the collateral damage of those things, especially with regards to buildings.
If the macroscopic polarization of molecules in a dielectric swing in response to an electric field, would that cause any variance in the polarization of the subnuclear/subelectronic particles hypothetically suspected to be responsible for gravity? Thermokinetic energy (or in this case lack therof), induced polarization (via centrifugal force) in a magnetic field was supposedly responsible for the shielding effect against gravity above a super-conducting disk in a lab experiment.)

- Likewise, the oddities associated with tornadic/cyclonic activity and electricity are pretty much irrefutable nowadays, I think. Not only the whole dynamics of the charged sheath vortex, but the scavenged debris (from well outside the funnel cloud base), the icy hail (regardless of the atmospheric temperature), and oddly enough- the tornado's ability to lift things with more than just 'air pressure' (the guy who got lifted off the ground by the tornado, but was able to keep his grip on a fencepost(!?) to keep from being blown away), and many other characteristics all point to the electrical nature of tornados.

- Hurricanes, from what I've gathered, do not show any exempliary electrical effects (other than the base cyclonic nature of them, which most attribute simply to planetary rotation and hydrodynamic effects), but I wonder...
Most hurricanes form in particular 'bands' around the planet. Check out the picture from that recent TPOD: 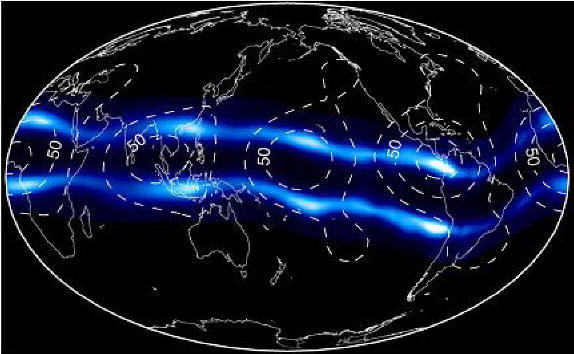 I wonder if tornado alleys also form under these 'bands' (which I think are a [url2=http://www.plasma-universe.com/Diocotron_instability]diocotron instability[/url2] like the storm bands of the gas giant planets? 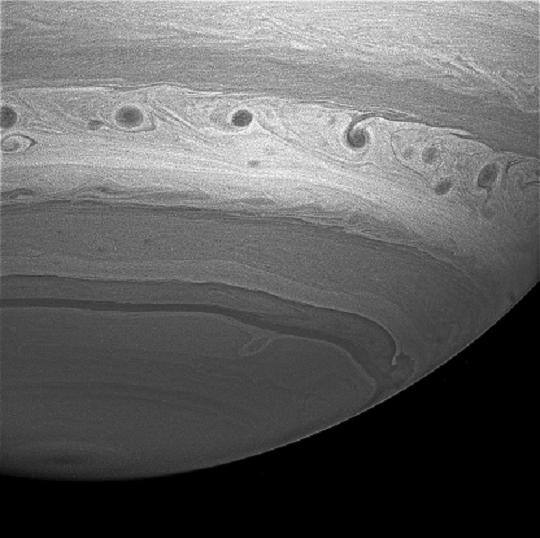 Of course, it's one thing to sit around and surmise all this stuff... but I haven't a shred of evidence to back any of it up!

MrAmsterdam wrote:Question; are earthquakes electrically induced? Or does the enormous tension in the ground produce electric charges?

They are not really electrically induced, they are stressed formations giving way. However they are always accompanied by electrical fluctuations. ELF and ULF (Extra Low Frequency and Ultra Low Frequency) waves are associated with Earthquakes. When around 2 Hz signals are detected it is a strong indication that an Earthquake is about to happen.
Ray Tomes
Web site : YouTube : Blog
Top
Locked
222 posts