In a recent paper published in EPJ H, Jayant V. Narlikar, professor emeritus at the Inter-University Centre for Astronomy and Astrophysics in Pune, India, shares his personal reminiscences of the evolution of the subject of cosmology over six decades. He tells of the increase in our confidence in the standard model of cosmology to the extent that it has become a dogma.


The author argues that despite the popularity of the standard hot big bang cosmology (SBBC) it rests on rather shaky foundations. On the theoretical side there is no well established physical framework to support the SBBC; nor is there independent observational support for its assumptions like the nonbaryonic dark matter, inflation and dark energy. While technological progress has made it possible to explore the universe in greater detail with open mind, today’s cosmologists seem caught in a range of speculations in support of the big bang dogma. Thus, in modern times cosmology appears to have lost the Camelot spirit encouraging adventurous studies of the unknown. A spirit of openness is advocated to restore cosmology to its rightful position as the flagship of astronomy.

I'd say that's about right. Regardless of the number of failed observational 'tests' and failed experimental 'tests'' of dark matter, the dogma continues unabated. It seems like the confidence factor can *only* really be explained by blind faith in the BB dogma because very little real evidence actually supports it. It's good to see that there are at least a few "professionals' that recognize the problems that we see in astronomy today.
Top

I would say that the transition from empirical science in astronomy to pure faith in "metaphysical dogma" occurred around the time that dark energy was proposed, and stuffed into an otherwise falsified BB theory. It's rather surreal that in order to salvage a bad/wrong/falsified interpretation of the phenomenon of photon redshift, that they opted to *not* reevaluate their original claim as to the actual cause of redshift, but instead they opted to fill the gaps of their failed model with twice as much metaphysical gap filler than the rest of their model combined. That's simply an irrational choice.

It would have made logical sense to reconsider their interpretation as the the cause of redshift, and take a closer look at the *second* explanation for redshift that Hubble discussed, but it doesn't really make any sense at all to relegate empirical physics to a minor bit player in any cosmology model.

Even adding a *little* bit of scattering to their equations would have eliminated the need to resort to such an absurd departure from empirical physics. Embracing inelastic scattering would have made the BB model more congruent with empirical physics. Instead however, they opted to simply assume that all their other assumptions were valid, and add yet a new metaphysical construct which must now assume the leading role and become *the* single most prominent feature of their model. That doesn't really make any logical sense unless you're being dogmatic, egotistical and stubborn about your beliefs.

That questionable change was bad enough, but the last decade of "testing" has been particularly unkind to the LCMD model. The mainstream spent *billions* of dollars/euros searching for dark matter, only to falsify every popular mathematical model of dark matter. Worse still, the credibility of their baryonic mass estimates was utterly destroyed by the revelation of numerous errors in their calculation methods. Anyone who's not emotionally and professionally attached to "being right" would simply "do the right thing' and update the baryonic mass calculations to minimize the need for exotic matter. But noooooooooo......

The same thing happened to their solar model in 2012. SDO obliterated their claims about the speed of convection. It demonstrated that mass movements under the photosphere are only about 1 percent of their 'predicted' value. Here we are almost 6 years later, and they haven't even attempted to "fix' their broken solar model. They're like a deer in the headlights as it relates to solar physics. They don't have any idea how to fix that problem without ruining the whole model, so they just refuse to discuss it. Attachment to pure dogma prevails in solar physics too.

What's most telling IMO is just looking at how many different so called "tests" that LCDM has bombed over the past decade. It's failed more "tests" than it ever passed. There's no logical way to falsify any model if you're going to simply ignore any and all negative results of your own 'tests'. That's really where we're at with astronomy in the 21st century. LCDM has evolved into pure metaphysical dogma, and as such, it's impossible to falsify it.
Top

Found this in: https://www.reddit.com/r/PhilosophyofScience/
And it seems to apply to almost all of astronomy. 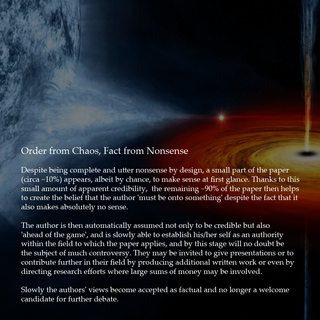 Order from Chaos, Fact from Nonsense

Despite being complete and utter nonsense by design, a small part of the paper
(circa 10%) appears, albeit by chance, to make sense at first glance. Thanks to this
small amount of apparent credibility, the remaining ~90% of the paper then helps
to create the belief that the author 'must be on to something' despite the fact that it
also makes absolutely no sense.

The author is then automatically assumed not only to be credible, but also
'ahead of the game', and is slowly able to establish his/her self as an authority
within the field to which the paper applies, and by this stage no doubt be
the subject of much controversy. They may be invited to give presentations or to
contribute further in their field by producing additional written work or even by
directing research efforts where large sums of money may be involved.

Slowly the authors' view become accepted as factual and no longer a welcome
candidate for further debate.

The Butterfly Effect of Biased Science

In science there are many ideas that became popular. Popularity has nothing to do
with reality, but everything with beliefs and bias.
I think that the Big bang became popular for religious reasons. Now we had a scientific creation event.
People do simply want this to be true, and it fits the observations just enough.
The same is with many other popular theories.

If we introduce a theory that becomes popular, real-world observations are modified or ignored to
keep the theory "alive". Scientists really become obsessed in finding ways to keep the old theories.
That is because it is hard to break with something that has become a great part of your life.
The brain can also perceive an attack on a theory/belief as an physical attack.
So scientists specialised in the model will use their capabilities to deny any adaptions to their theories,
and not be able accept any changes.
This is even worse: they will attack anyone who threatens them, and guard the theories via peer-review systems.
They will also hinder progress via unfounded criticism and control of finances and other resources.

This can start with a single small event. Let's start with the effect of light on magnetism by Zeeman.
After finding the effect, we find it everywhere. Especially on the Sun.
So now the sun has become magnetic. And even though it breaks with maxwell's equations,
the scientists involved invent their own magnetic interactions, that exclude all electrical fields.
This seems to match all observations, and these scientists become "specialists" in this field.
Still we have no clue of how it works, but any criticism has now to go through many
layers of peers and unfounded criticism that use all their capabilities to prevent changes to
their models. They also write books and educate new people in their fields, fortifying their
position even more.
The unicorn of magnetic reconnection is born.

Yet, if only they had looked deeper at the magnetic model of the sun,
they could also see that it does not work at all with Maxwell.
They could be sceptical and place a 'maybe' in the observations of the Zeeman effect.
And validly conclude that it needed more research and observations.
But it is hard for scientists to be inconclusive and truly sceptical.

Years later Stark found the electrical variant of the Zeeman-effect. And with that the sun
is suddenly much easier to understand. But the scientists do not want to understand it.
They can not even understand it, because they have always looked at it in the wrong way.
All their education, books and personal work has been the wrong way.
They will want to hold on to their false models as if it is their lives.
So instead of specialists that improve the science by review,
they have become corrupted protectors of flawed theories.
The unicorn of magnetic reconnection can not be killed.

This is the butterfly effect of a false theory in science.
Just a small error creates a path towards a wrong theory
that keeps us in the dark for many many years.
More ** from zyxzevn at: Paradigm change and C@
Top

I'd certainly have to agree with that assessment with respect to dark matter. There's no money for them in openly admitting that their galaxy mass estimation techniques have been the real problem all along, but they can collect billions of dollars by insisting that they made no serious mistakes in their estimates of galaxies, therefore "exotic matter did it and give us money to find it".

Suspect you mean "Anthropogenic" and not Anthropomorphic, which is something totally different.
http://www.global-greenhouse-warming.co ... hange.html

(which is of course all BS - the state has finally found a way to tax the air we breathe)
You will never get a man to understand something his salary depends on him not understanding.
Top
Locked
6 posts • Page 1 of 1