Proper analysis of the data does support the EU. The inescapeable fact they are unable to reproduce magnetic reconnection in the lab, in no way stops them from interpertating the data as this event. Take heart, for those that do understand the data can see a harmonic mode being exhibited as in my above post. The sun has millions of harmonic modes that have not been taken into consideration when it comes to this data....rather they force a mind experiment into a supposed fact, yet no lab has EVER shown magnetic reconnection.

We are dealing with a inaccurate model that was refuted by its orignator for which he won the Nobel Prize, that would be Hannes Alfven and magnetohydrodynamics. Magnetic Reconnection is a violation of an approximate conservation law in plasma physics.
If you only knew the magnificence of the 3, 6 and 9, then you would have a key to the universe.
— Nikola Tesla
Casting Out the Nines from PHI into Indigs reveals the Cosmic Harmonic Code.
— Junglelord.
Knowledge is Structured in Consciouness. Structure and Function Cannot Be Seperated.
— Junglelord
Top

A few links proffered by others in various threads relating to "magnetic flux ropes" / electric currents, re: magnetic reconnection (or alternatives thereto).

They use ELECTRICITY IN SPACE for earthquake monitoring!

May I add another clue (after my contribution of the "battery in space")...

...After moving back to Strela, they moved a foot restraint from its boom to the exterior of Zvezda. They returned to Pirs, got an experiment called Vsplesk and moved with it to the large-diameter section of Zvezda.

There they installed the experiment, which monitors seismic effects using high-energy particle streams in the near-Earth environment. Then they installed cabling....

Wondering, what they meant with those "high-energy particle streams". Up to what we know by now these are changes in the current-density of the ionosphere that can be measured (in electrical terms the changing currents!) - as we do know that e.g. in case of the big tsunami in 2004 the "ionosphere moved about 40kms up and down over Sumatra".

As question remains only now whether this was the cause or an effect of that quake.

There were, of course, also the ionospheric changes leading up to the Sichuan quake earlier this year, as observed by a Taiwanese satellite... IE, a significant drop-off of charged particle counts in the ionosphere just preceding the quake, in the hours / day before. I think they said it dropped off by like half...? Yup!

On May 11, the eve of the quake, the ionospheric density over Sichuan had dropped by half to 600,000 charged particles.

Formosa-3 was launched by the Taiwan National Space Organization in 2006.

Since then, Formosa-3 has recorded ionospheric density after 63 earthquakes measuring magnitude 5 or above on the Richter scale, revealing a sharp drop in ionosphere density in 70 per cent of these cases.

An earthquake measuring 7.9 on the Richter scale hit Sichuan County, south-east China, at 2:30 pm on May 12.

They have got to be kidding Please read,

"Researchers have discovered that explosions of magnetic energy a third of the way to the moon power substorms that create the Northern Lights.
Five NASA satellites helped researchers pinpoint how sudden brightening and rapid movements of the aurora borealis take place. NASA said this week that researchers believe stressed magnetic field lines suddenly snap to a new shape, like a rubber band that's been stretched too far, during a process called magnetic reconnection. "

With all the money we give these "scientists" shouldn't they produce this effect conclusively in a labaratory setting before they write this "stuff"
At the very end we have an interesting piece that slipped through the censors:

"Recently, the satellites observed an isolated substorm beginning in space, as the observatories recorded the lights and currents over North America. That lent support to the theory that magnetic reconnection causes substorms, NASA said. The theory is that when a substorm begins, it follows a pattern that includes reconnection, rapid auroral brightening, and rapid expansion toward the Earth's poles. That, in turn, redistributes electrical currents flowing in space and around the Earth."


That ending made me chuckle: Redistribution of electrical currents flowing in space, maybe they have been reading Thunderbolts.info,
Top

Aurora with No Solar Wind

NASA space weather daily reports.
It's amazing how they sweep things under the rug.
Nothing special? Its a perfect example of the EU.

UNDER THE OVAL: No solar wind? No problem. The skies over Baffin Island, Canada, can turn green even without a geomagnetic storm. These auroras appeared during a period of "quiet" on Oct. 15th:

"Last night, bathed in the glow of a full moon, the northern lights danced over Pangnirtung Fjord," reports photographer Claus Vogel. "It was a stellar night for shooting the aurora with my Nikon D700."

The display was sparked by nothing special. Baffin Island lies under Earth's auroral oval, a lopsided ring of light encircling the North Pole. Around the oval, Earth's magnetic field funnels electrically-charged particles from space into the upper atmosphere where the flurry of tiny impacts causes the air to glow green--no geomagnetic storm required.

Of course, a real storm is nice, too. Browse the gallery for examples:

If you only knew the magnificence of the 3, 6 and 9, then you would have a key to the universe.
— Nikola Tesla
Casting Out the Nines from PHI into Indigs reveals the Cosmic Harmonic Code.
— Junglelord.
Knowledge is Structured in Consciouness. Structure and Function Cannot Be Seperated.
— Junglelord
Top

Like wow man... Charged particles follow magnetic field lines (or spiral around them, more-or-less); who'd have guessed it?

So the magnetic field is funneling charged particles from space? Well, isn`t that exactly what aurora itself is?
My personal blog about science, technology, society and politics. - Putredo Mundi
Top

The aurora is always related to the solar wind. Since the wind was nil but the aurora still present, it means that space is full of charge.
If you only knew the magnificence of the 3, 6 and 9, then you would have a key to the universe.
— Nikola Tesla
Casting Out the Nines from PHI into Indigs reveals the Cosmic Harmonic Code.
— Junglelord.
Knowledge is Structured in Consciouness. Structure and Function Cannot Be Seperated.
— Junglelord
Top

Nice vid with sounds of aurora

Listening to Northern Lights
http://www.youtube.com/watch?v=eHvdZdsIZxg
The illusion from which we are seeking to extricate ourselves is not that constituted by the realm of space and time, but that which comes from failing to know that realm from the standpoint of a higher vision. -L.H.
Top

One theory I've heard is that when the solar wind is minimal, the strahl electrons can flow more freely along the suns magnetic field lines directly to the Earth without being scattered by the normally denser population of protons.
Top

What would be the Electric Universe explanation for these cloud formations? Anybody know or have any insights?

They have a link to the AIM space mission to investigate them, but I tried the link yesterday and it's a dud. I'm guessing they found out things that don't support their conventional cosmology. How much you wanna bet it's an electrical phenomenon that becomes visible because during solar minimum the layers of the atmosphere are not as high above the surface of the earth, so the cold of space is closer than otherwise?
Top

Sky watchers in the northern hemisphere have snapped the first images of this year's noctilucent clouds – silvery blue structures that are the highest clouds to form in Earth's atmosphere. This season's crop of clouds could be the biggest in years due to the lull in the sun's activity.

"Noctilucent", or night-shining, clouds float dozens of kilometres higher than other clouds, at an altitude of about 80 km. Because of their height, they can be seen glowing before sunrise or after sunset as the sun illuminates them from below the horizon.

The clouds were first seen above polar regions in 1885, suggesting they may have been caused by the eruption of Krakatoa two years before. But in recent years the clouds have spread to latitudes as low as 40°, while also growing in number and getting brighter. The reason for the clouds' spread is unclear...

Although the average number of noctilucent clouds has been increasing in recent decades, their abundance also seems to rise and fall with the sun's 11-year cycle of activity. The clouds thrive when the sun is quiet and spews less ultraviolet radiation, which can destroy water needed to form the clouds and can keep temperatures too high for ice particles to form.

...Although amateur astronomers last week snapped photos of the Northern hemisphere's first noctilucent clouds of the season, AIM caught the first hints of the new cloud season the previous week, on 22 May. The hints came from the subtle dimming of sunlight passing through the Earth's atmosphere, Bailey told New Scientist. 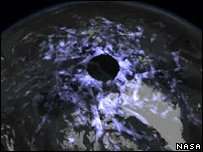 "These clouds are getting brighter with time, they're seen more often and also they're being seen at lower latitudes," said James Russell from Hampton University, Virginia, US.

Scientists believe that the shining clouds form at high latitudes early in the season and then move to lower latitudes as time progresses.The AIM science team is studying this new data to understand why these clouds form and vary, and if they may be related to global change.
Once the summer season ends in the Northern Hemisphere around mid- to late August, the Southern Hemisphere spring season starts about three months later in the period around mid- to late November. AIM will then be watching for shining clouds in the Southern Hemisphere from November through mid-March when that season ends.

* This thread should actually go on the Planetary Science board. This one is for stars, galaxies and the like, not planets, moons etc.
* There's been discussion of these clouds before, as early as January 2008, if not earlier. The forum crashed early last year, I think, so most of the previous threads were lost.
* Do a search for noctilucent to find the other discussions.
Top
Locked
104 posts

Users browsing this forum: No registered users and 14 guests