Scorching blackens things.
It is common to see dark stains around craters on all the rocky planets.

Heat from the electrical discharge causes the scorching. That article makes we want to puke a dark color. "It can't possible be anything else, our assumptions become fact because we know them"

I mean this is the their sole data point? "The number of neutrons fleeing a planet’s surface tells scientists what the surface is made of"

I had to look up what this thing was, found it.

Gamma-Ray and Neutron Spectrometer (GRNS): This instrument will detect gamma rays and neutrons that are emitted by radioactive elements on Mercury's surface or by surface elements that have been stimulated by cosmic rays. It will be used to map the relative abundances of different elements and will help to determine if there is ice at Mercury's poles, which are never exposed to direct sunlight.

Gamma rays and high-energy X-rays from the Sun, striking Mercury's surface, can cause the surface elements to emit low-energy X-rays. XRS will detect these emitted X-rays to measure the abundances of various elements in the materials of Mercury's crust.

And guess what, if you go look at this instrument, 'carbon' is not one of the things it 'might' 'detect'.

GRS measures gamma rays emitted by the nuclei of atoms on Mercury’s surface that are struck by cosmic rays. Each element has a signature emission, and the instrument will look for geologically important elements such as hydrogen, magnesium, silicon, oxygen, iron, titanium, sodium, and calcium. It may also detect naturally radioactive elements such as potassium, thorium, and uranium.

And let's go full circle back to our Verge puke fest.

Let me know when you drop a lander down there and get a sample.
interstellar filaments conducted electricity having currents as high as 10 thousand billion amperes
Top

A flat bottom crater like this was formed by an arc of rotating current.
As the material was being evacuated, a fine spray of dust has been ejected by the current.
And maybe it does contain carbon.
Who knows what elements can be created by a current of that magnitude.

But my guess/prediction is that the black stuff is microspherules, like fine Martian blueberries.
Tiny little melted spheres of rock.

comingfrom wrote: Heat from the electrical discharge causes the scorching.

I've been learning to weld recently. Scorching around electrical discharges is definitely in my mind 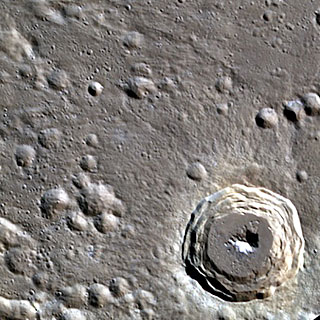 This looks like a protrusion rather than a crater. But its hard to tell, and I could easily be deceiving myself in thinking that. I'm trying to look at the shadows and figure out whether what I am looking at is raised on the surface or sunk into it. Can anyone confirm if its an inny or an outy?

Either way its a strikingly electrical feature.
Top

This looks like a standard crater such as what can be seen through any telescopic view of the Moon. It has terraced walls and a relatively flat floor with a central peak.
It seems reasonable enough from the similarities of the surface features, to assume that the scarring of Mercury must be due to a similar process as happened to the Moon.

Note that on the Moon there are domed features, however they are relatively rare compared to craters.
Top

I think it must have a raised rim; looking at it with that in mind light and shadow fall into the right places.

It just looks so like a blob of arc weld...
Top

Always start focussing on the center, you will see the flat floor as the lower part...

Once you decide that the light is coming from the lower left, and shadows are falling to the upper right, look at the upper right bright part of the crater and think 'Down' until you see the floor below ground level, then you can rotate focus around the rim and see the profile.

I also notice many hexagonal features in the layered rings of the wall. The center of the flat floor has a sharp mound peak in it.
interstellar filaments conducted electricity having currents as high as 10 thousand billion amperes
Top
Locked
160 posts