Thank you for your welcome and assistance.
Top

Wilson wrote:Is the current powering the sun an alternating current with ...

As Don Scott remarked (I forget whether privately or publicly), AC as it exists in electrical grids on Earth (60Hz or whatnot?), does not exist in space. Current to the sun would be DC, though variable (time-varying?)...

Wilson,
Welcome to the Thunderbolts forums.

What is the Electric Universe theory's explanation for the periodic reversals of the earth's poles? Do you accept the notion that there is an 11,000 year cycle which is now about to change, as raised at urban survival blog today?


Pertaining to the 11,000 year cycle of magnetic pole reversals, we have to ask what methods were used to arrive at this figure? The dates are derived from a [url2=http://en.wikipedia.org/wiki/Uniformita ... _(science)]uniformitarian[/url2] interpretation of geological strata and radiometric dating techniques. This uniformitarian assumption precludes global catastrophes involving enormous electrical discharges on a planetary scale, where in layers of strata could be deposited in a matter of days or even hours, distorting the results of radiometric dating by modern scientists. Geologists interpreting this strata through their uniformitarian tinted glasses measure millions of years at assumed slow depostion rates. When actually, they could have been formed rapidly and recently.

If catastrophic changes to the solar system have occurred, then radio decay constants have changed. If the plasma discharge phenomena we call the thunderbolts of the gods actually flew between Earth and other planets, this too would have changed the radio decay constant (as well as the abundances of radioisotopes). In any case, the whole question of absolute dating must be re-evaluated from an electric universe point of view.
http://www.thunderbolts.info/tpod/2004/ ... fossil.htm

So the short answer is, no, there is not any good reason to accept an 11,000 year cycle of magnetic pole reversals. That being said, reversals of the Earth's magnetic poles have taken place, and the proposed planetary catastrophes present a simple explanation of how that mechanism could work:

A thunderbolt, on striking a magnet, reverses the poles of the magnet. The terrestrial globe is a huge magnet. A short circuit between it and another celestial body could result in the north and south magnetic poles of the earth exchanging places.

Was just curious if there's a written explanation of earth's occasional magnetic field reversals as an EU event. Molten magma shifting around the earth's core seems a bit weak, especially when one considers a magnetic field as evidence of an underlying electric current. Adding to the EU argument is that ships apparently have measured "banding" of the earth's magnetic field. So we've got current flow and magnetic fields lines emanating from the earth in characteristic patterns. This process is simple enough. A model for reversal has me a bit stumped.

In theory it is as simple as an electric current reversal but how would this manifest itself? The earth is passing through an alternating "wave" or cyclical electric "structure" in space? Is there something else I'm missing?
Top

Peter Warlow did an interesting presentation at the Cambridge SIS conference the other year about the reversals of the earth and the possibility of the earth turning upside down. There is a full recap with a lot of extra information, diagrams and sources in the SIS review 2008. Peter used a gyroscope to show what could have happened. You can read more about it also in his book "The Reversing Earth".

one of the diagrams in the SIS review 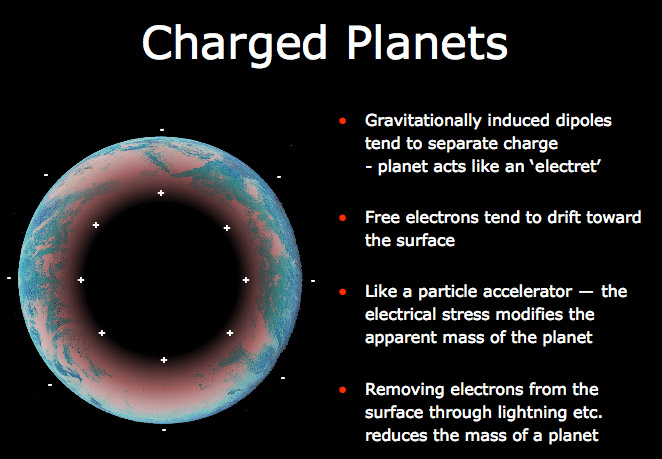 If the electric current connecting or powering the earth changed then would the earths charge change and its magnetic field? Would a change in the planets configuration in the solar system mean a change in charge of current flow?

I have wondered if the birkleand currents that power the sun has "moved" or jumped in the past between the gas giants? This might explain why other gas giants have been the sun and the Sun we have today not so bright or imporant. If that large current can change would that change the earths current/charge and could any birkeland currents connecting to the earth also change flow/charge? Just some thoughts i had...
Everything is Electric?
Top

The Great Dog has read that there are two ways to reverse the field in a permanent magnet. Turn it over, as shown in the SIS illustration, or hit it with a bolt of lightning.

After reading through the archives, it appears that numerous Pictures of the Day in the last 5 years have contended for immense plasma discharges between Earth and some other celestial body. The Great Dog favors an electrical hypothesis because of bathymetric magnetic striping, among other reasons.


TGD
There are no other dogs but The Great Dog
Top

On a related thread, it was discussed that seafloor striping does not necessarily indicate whole earth magfield reversal... local features of the spreading zone[s] may be associated with strong telluric-type currents which could alternately produce striping effects... in this view it is assumed that the rate of spreading during the "striping" process was much greater than observed today. I agree with the Big Dog that EU offers the best framework for field "reversals" however. The Faraday-disk-dynamo based magfield hypothesis requires the application of imaginary numbers to effect reversal.
Truth extends beyond the border of self-limiting science. Free discourse among opposing viewpoints draws the open-minded away from the darkness of inevitable bias and nearer to the light of universal reality.
Top

The Great Dog wrote:The Great Dog has read that there are two ways to reverse the field in a permanent magnet. Turn it over, as shown in the SIS illustration, or hit it with a bolt of lightning.

I'm aware of how one does this with a permanent magnet, but what about an electrically induced magnetic field in a conducting body? Or is it the general consensus here that earth's magnetic field is purely "lodestone" based and doesn't have a primarily electric origin?

(Though I am reminded that you can't have one without the other, so that a lodestone earth would be generating an electric field. It's all a question of which came first.)
Top

In related threads, it has been discussed that interplanetary, interstellar or even galactic scale Birkelund currents drive the magnetic field properties of the planets. While it is much more "chaotic" than most folks realize [unlike the simple bar-magnet diagrams in schoolbooks], the earth's magnetic field is clearly a global phenomenon, requiring a planet-sized [or bigger] cause.
Truth extends beyond the border of self-limiting science. Free discourse among opposing viewpoints draws the open-minded away from the darkness of inevitable bias and nearer to the light of universal reality.
Top

I have found that there is an effect of gravitation in GR on photons in the Sun which can account for the Sunspot cycle, i.e. for the Solar magnetic reversals. You can read about it in BAUT forum at http://www.bautforum.com/against-mainst ... cycle.html

In essence, gravity affects photons more than it affects ordinary matter, as Einstein showed that light is bent twice as much as in Newtonian theory and this has been confirmed by observation during solar eclipses. That acceleration of photons in the Sun causes N-S convection because of the tilt of the solar axis relative to the outer massive planets.

There is no reason why the same should not apply to the earth. In fact, the earth's magnetic field reversals show at least two periodicities, 1.11 and about 8.9 million years. The 1.11 million year period is also present as an energy exchange between Jupiter and Neptune, so it looks favourable that this model will explain the Earth magnetic reversals. To confirm this requires long term calculations of the motions of all the larger planets and the Earth's precession and axial tilt. Then the combined effect along the Earth's N-S axis must be integrated over those periods. It depends on there being more photons in the core than nearer to the surface which is assured by the higher temperature. Of course the Earth is much less full of photons than our local Hydrogen bomb which is why the reversal period is like 1.11 million years rather than 11.1 years. Hey, almost exactly 100,000 times as slow!
Ray Tomes
Web site : YouTube : Blog
Top

the earth's magnetic field is clearly a global phenomenon, requiring a planet-sized [or bigger] cause.

Earth's magnetosphere seems to be an interference pattern borne of an interaction between the Heliospheric current sheet and some property of the Earth. If the internal dynamo theory were correct the magnetosphere would be spherical.

Solving for M, the Mass of the Earth, and using

~ We have a six decimal difference there. Is there a related cycle including the factor of 3 ?

Here are a couple of old posts (with which I agree) from Steve Smith on the EU position on geomagnetic reversals:

Steve Smith wrote:Magnetic field reversals are a theory based on misinterpretation of the magnetic "striping" on the seafloor and lava flow inconsistencies.

The main magnetic field, generated by turbulent currents within the deep mass of molten iron of the Earth's outer core, periodically flips its direction, such that a compass needle would point south rather than north. Such polarity reversals have occurred hundreds of times at irregular intervals throughout the planet's history – most recently about 780,000 years ago – but scientists are still trying to understand how and why.

The assumptions are: the Earth has a liquid iron interior. The Earth generates a magnetic field through a "dynamo" effect. The reversals have happened hundreds of times. The last time was almost a million years ago.


The Electric Universe theory is diametrically opposed to those assumptions.

and later in the same thread:

Responding to an earlier point: there are two ways to flip a magnet's orientation.

2. Hit it with a bolt of lightning.


I recommend reading p146 of Earth In Upheaval where Velikovsky cites the work of Folgheraiter (1896) who studied pre 8th C BCE Greek and Etruscan vases, and concluded that when they were made, the magnetic polarity in Italy and Greece was reversed from that of today.

The position of the ancient vases during firing is known. They were fired in a standing position, as the flow of the glaze testifies. The magnetic inclination or the magnetic dip of the iron particles in the fired clay indicates which was the nearest magnetic pole, the south or the north.

While there may be debate over the chronology of the vases, there is evidence that a magnetic reversal(s) took place recently, within the memory of man.

Thanks nick - I came to a similar conclusion after reading the posts referenced by your prior reply. My initial enthusiasm for an electric answer is because I was only recently "turned on" to EU (after a long and varied career which coincidentally included plasma research and relativity experiments in space). It initially seemed like a great candidate for an electric field explanation.

But then I looked at the dates involved and the "science" on which the hypothesis rested and geomagnetic field reversal quickly turned into yet another urban myth. I'm not ready to commit to any stand on field reversal as per the vases mentioned. It might mean something, it might not. Not enough information.

Users browsing this forum: No registered users and 8 guests