I generally agree that every tenet in the SM need not be replaced by an EU counterpart.
Where the SM is challengable with regard to cosmology, astronomy, or other earth sciences, it needs to be challenged, and EU-ers do that well. Likewise, EU tenets need to be challenged where they depart from the realm of the observable and experimentable. The "gravity-only" mentality of SM-ers is no wronger than the disavowance of gravity by some EU-ers. These challenges either way do not assert the absolute correctness of any particular view, but my hope is that we all come closer to an understanding of the truth, hence my signature line.
Back to Berthault, his experimental evidence simply shows that stratification does not follow the law of superposition... that's pretty much it. It is simple reproducible work, and radically breaks down the major assumption that underlies the geologic column, index fossils, relative dating, and by correlation, radiometric dating. It says little about uniformitarianism or catastrophism, both sides may use his work to support whatever they wish, I suppose. I for one, like it for its support of catastrophic flood geology, one of my paradigms. In the end there is no final place for "my evidence is better than yours", all of the evidence must point to the truth.
Truth extends beyond the border of self-limiting science. Free discourse among opposing viewpoints draws the open-minded away from the darkness of inevitable bias and nearer to the light of universal reality.
Top

On a lighter note, isn't it odd that creationists don't flock to myth and EU. Much of the myth is from the same source creationists use. Word for word. But creationists being ignorant of EU only have a flood at there disposal. They concentrate on the flood. Any effects of the flood were erased by the events that followed, i think.

Creationists ignore the Plagues of Egypt. I suppose the events described are beyond the realm of possibility. But a flood is approachable. And it's repeatable with an ice dam.

The point is, anyone limited to flooding, no matter how extreme, won't get IT. You need all the unlikely elements.
I Ching #49 The Image
Fire in the lake: the image of REVOLUTION
Thus the superior man
Sets the calender in order
And makes the seasons clear

You cast a wide net, starbiter... but it didn't catch me. There is a lot of anti-creationist slander going around these forums. Generally, I would say that each of your three statements is unfounded. Some of us would rather just avoid this being an issue, rather than derail the EU threads.
Truth extends beyond the border of self-limiting science. Free discourse among opposing viewpoints draws the open-minded away from the darkness of inevitable bias and nearer to the light of universal reality.
Top

No offense was intended. And i'm sure there are creationists who are aware of EU. That being the case, i would think they would be more common in EU circles. And most of what i've seen of creationism concentrates on floods. Not plasma events. Am i wrong there.

I've approached some creationist organizations about EU and i'm waiting to hear back. I think we should be allies. That was my point. We have so much in common. You made what i said seem dirty.

To a large extant i'm a creationist. I just have a problem with faith.

micharel steinbacher
I Ching #49 The Image
Fire in the lake: the image of REVOLUTION
Thus the superior man
Sets the calender in order
And makes the seasons clear

4. Something solidified the sediments and fossils in the plateau.
Lloyd

Now surely all the sediment of the geological column was formed before the break-up of the Saturn System and thus before the great flood. I am considering the possibility of the sediment of the geological column being formed in a few or many events or episodes. And each event involved not only much sedimentation but a lot of water too, so that it is conceivable that much water flowed down the canyon in each event.

I've more than once felt that the Grand Canyon was formed by water, but now I'm pretty strongly on the EDM side, but both fit into my overall theory without any problems. And the Lichtenbergs are probably the best evidence.
Mo
Top

4. Something solidified the sediments and fossils in the plateau.

Now surely all the sediment of the geological column was formed before the break-up of the Saturn System and thus before the great flood.

* What better event to produce the sedimentary strata of the Grand Canyon than the Great Flood? And the something that hardened the strata into rock I figure was electrical stress.
* There's still the question of how the fossils formed in each stratum. If the animals were freshly drowned as the strata were being deposited, those of certain sizes and densities may have tended to be deposited at certain levels.
* I think the strata were solidified into rock before the canyon formed, and electric discharge must have carved it, because the canyon walls are very steep in many places, whereas mud and wet sand would not form steep sides. Would they? And there's little sediment in the Colorado River delta.

Hello lloyd: Great image. It's so informative. The details. Thank you. The dunes are in the background. The formations in the foreground were submerged during the catastrophes. The areas with flat tops were deposited under water. After the water began to recede the canyon you see with steep cliffs was eroded by a raging river. Water erodes sediment in a matter of days. This happened in TX. recently during a flood. During the flooding, the flat areas would have been the end of the sediment deposition during a flood of slurry. Can you see it?

sediment michael
I Ching #49 The Image
Fire in the lake: the image of REVOLUTION
Thus the superior man
Sets the calender in order
And makes the seasons clear

Michael, I think you're still ignoring the fact that there's no outwash deposits to speak of from the Grand Canyon.
Now here's what EDM looks like at large and small scale, i.e. Comet Wild 2 on the left and small piece of metal on the right: 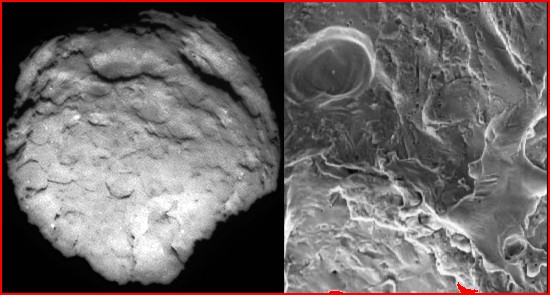 * This image of Valles Marineris on Mars is surely an electrical erosion, isn't it? And that's larger than the Grand Canyon. So why would the latter not be electrical erosion as well? Compare this to the continental shelf erosion on my post on previous page.

Hello Lloyd: From what i can see, the Contenental Shelf is the outwalsh, as per the video.

I have no idea what your EDM comments, or images refer to.

[Lloyd those videos were a great find. If you stumble across any more, I hope you'll post them here.]

There is one very good reason why the word "global" could never apply to electrically deposited, instantly lithified particulate matter: a plasma sheath capable of turning particles to stone would not press uniformly across the surface of the Earth: it would preferentially pinch, or be more highly compressed and charged, at distinct intervals across it's surface.
Doubt is not proof.
Top

* What better event to produce the sedimentary strata of the Grand Canyon than the Great Flood?
Lloyd

I can't ignore the big divisions in the sediments where there is huge differences in the fossils. It is clear to me that there was more than one event with considerable time between depositional events. So I came up with recurring close approaches of another planetary body to Earth.

However I have no other problem with your theory, and I could live with it.
Mo
Top

Hello lloyd: The image from Mars you added to your post certainly looks similar to formations on Earth that i think are electrical in nature. Liquid erosion could be a factor if Mars had it's ocean removed during interplanetary encounters. But plasma alone could probably explain everything we see.

The layering of the mountain surrounding the Grand Canyon implies a repetition of flooding and duning. That fits the recurring close approaches of a planetary body Moses mentions. This is the Worlds in Collision model.

Michael said: I have no idea what your EDM comments, or images refer to.

* They refer to evidence for EDM erosion of the Grand Canyon as primary and other erosion as secondary.

Kapriel said: a plasma sheath capable of turning particles to stone would not press uniformly across the surface of the Earth: it would preferentially pinch, or be more highly compressed and charged, at distinct intervals across it's surface.

* Isn't a plasma sheath the double layer that surrounds each Birkeland current, like insulation around an electric wire? I think it's only when the current gets too high that a magnetic pinch occurs. Vehicle manufacturers have used plasma paint sprays for a long time to paint car bodies uniformly with layers of paint that sticks very well to the metal surface. Electrical effects are scalable over many orders of magnitude, so it's reasonable to suppose that layers of sediment can be electrically deposited on a planetoid, as seems to be the case with Mars, as per this TPOD and the following image. The northern hemisphere of Mars was apparently eroded away by EDM and redeposited largely onto the southern hemisphere; blue shows low elevation. Looks like there's a deep hole near the Mars south pole.
http://thunderbolts.info/tpod/2005/arch ... osnote.htm

* The next image is Valles Marineris on Mars for comparison again with the Grand Canyon. 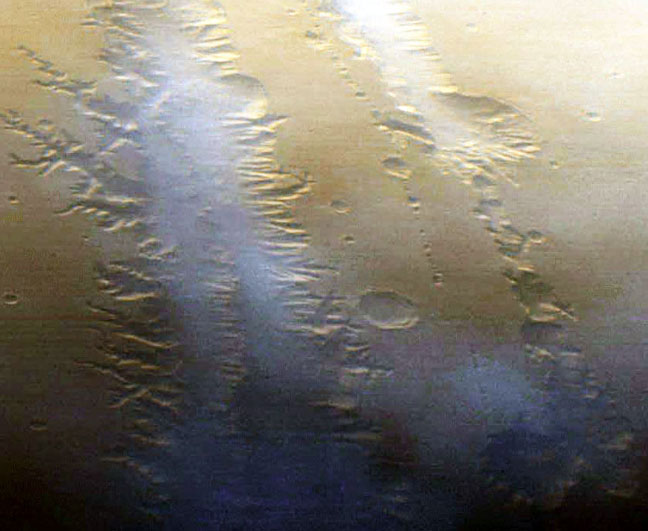 * By the way, if you click on this link http://www.users.globalnet.co.uk/~mfogg/dgblueMars.jpg, you'll see on the first image, to the left, that the Mars canyon, the large scratch, was carved from the highlands region, just like the Grand Canyon on Earth was carved out of the highlands of the Colorado plateau.
Last edited by Lloyd on Fri Apr 02, 2010 7:02 am, edited 3 times in total.
Top

Concerning the the sand removed during the formation of the Grand Canyon. The sand didn't produce the continental shelf as i said earlier. Other drainages were responsible for the shelf.

I think the Colorado River prevented the canyon from forming, while the mountain grew around the river, layer by layer. So there was no canyon of material to remove. The river washed the dust and sand that fell into it down stream. This filled in the desert to the south during the flooding. But much of the material flew across the river on the hurricane force winds, and started accumulating on the other side of the river.

During this process electrical rivers of fire converted the loose material to rock. That's what it looks like to me.

PS. on the videos.
I'm re-watching them. Still can't get over it. This changes everything. Why haven't the text books been changed?
The only part I'm not clear on are the brief comments made about chert layers found near transform boundaries. What was he getting at?
Doubt is not proof.
Top
Locked
182 posts