And I have no idea where you are going with the magnetic field stuff. All that proves is that there is nothing electrical happening on the nucleus!


It is well known where the magnetic field in the coma comes from. The IMF.

If there is a magnetic field in the coma, then the electric field there has coherent spin.

The fact that comets have a coma indicates electrical activity.
The coma is a plasmasphere.
Every body has one.

In the case of a comet, (it and) it's coma is travelling through the Sun's coma,
and that is what creates the electrical stresses.


The field hangs up around the nucleus, and piles up. Hence an increase in the magnetic field.

The field hangs up what around the nucleus?
And piles up?
I presume you mean like the swamp (NASA's term for the "piled up" solar wind) at the heliopause.


Within that piled up field is a diamagnetic cavity. That is, there is zero magnetic field within it (i.e. no electrical activity either).

Are you assuming no electrical activity because of the magnetic cavity?

Are you aware that not all electric fields have a magnetic component?

Mars and Venus do not have magnetic fields, but they have (the equivalent of) comas.


This is why it should be obvious that the silly idea of the solar wind creating water is laughable.

I'm with you on this.
The comet is well out of the Sun's equatorial plane, where the Solar wind is.

But the Sun's electric field extends to there.


It isn't reaching the nucleus for long periods. It is travelling too quickly (i.e. the H+ is too energetic to combine with anything). There isn't enough of it by orders of magnitude. There is little, if any O- to combine with even if it were possible. Which it isn't. And the H2O at 67P has a very different D/H ratio to the solar wind. Need I go on?

Don't ask us that.
You are saying all these things for your sake, to keep yourself convinced.

1. Something is reaching the nucleus, causing heat stress and outgassing. You yourself have said.
2. There are protons out there, even in the ambient IPM.
3. There is an abundant supply of oxygen atoms from the Silicon Dioxide in the nucleus itself.
4. Oxygen ions react not impossibly, but very readily, with any passing positive ion.
5. The H2O from the comet is a different source to the H2O in the solar wind, so they should have different ratios.
(Actually, I don't ever remember reading about H2O in the solar wind, but I guess there will be some in there. Mostly ionized.)

I think you missed hearing what you were being told.

Electrical interaction = elemental dissociation = jets containing water.
To use your style of summation.


It is obvious where the ice and H2O (and other) vapour comes from; the place where it has been detected numerous times; the nucleus.

Not denying there may be some water trapped in the rock.
Just saying, the comet is not a dirty snowball.


I think I'll give up on this place. I'm not sure what you believe in. However, that is what it seems to be; a belief system. It bears no resemblance to actual science.

Giving up is worse than failing.

I commented about this briefly on the other Comet thread, but think it would be appropriate to mention here that the alleged detection of "water" on extraterrestrial bodies has thus far been limited to the observance of 3-micrometer absorption patterns that are characteristic of OH- [hydroxyl ions], and phyllosilicates, ie. opal-like compounds that may have inclusions of OH- or H2O. The inclusion of water in these descriptions is wishful, because obviously that is the compound being sought. It cannot be stated with certainty [except by news-hounding reporters] that water innately exists in comet cores or other asteroidal bodies. It may be inferred that some water could be formed by the interaction of native hydroxyls with H+ [protons] in the solar wind. Or it could be assumed that such water is being released from below the dusty cometary surface. The latter assumption is of course the preferred report as it confirms the validity of the "dirty snowball" and consequently validates the expenditure of money used to search for it!
Truth extends beyond the border of self-limiting science. Free discourse among opposing viewpoints draws the open-minded away from the darkness of inevitable bias and nearer to the light of universal reality.
Top

In addition to the dry appearance of comets, the behaviour of sun grazing comets suggests that water and other volatiles are not a major component (as ices) of their interiors. The following is a quote from one of Steve Smith's TPOD articles from 2009.

...Sungrazers tend to reaffirm the Electric Universe opinion about comets....Comet NEAT swung close by the Sun in 2003, apparently initiating a CME eruption that appeared to impact the comet. Astronomers at the time discounted any relationship between the two events because of the size differential between the comet and the Sun. However, several other sungrazers have been associated with violent flares.... When comet 96P/Machholz circled the Sun, it came so close that if it were composed of ice with a small percentage of rock and dust it would have certainly disintegrated. It did not rapidly dissipate, however. Instead, its intense charge differential caused a gigantic CME to discharge from the Sun, blasting out for millions of kilometers. ...
http://www.thunderbolts.info/tpod/2009/ ... razers.htm

Michael Godspeed on the same subject in 2010,

... Nor did the "astonishing" flare-up of Comet Holmes 17P in 2008 as, it was headed away from the Sun, provoke a reevaluation of comet theory. Indeed the history of comet science as a whole provides numerous examples of common sense losing out to pure supposition. The layman can simply look at the best images of comets and see that they look nothing like dirty snowballs. They appear to be burned out rocks with sharply carved relief, not the smooth ice balls expected from mainstream theory. ...
http://www.thunderbolts.info/thunderblo ... comets.htm
Top

Finally, I have notified the Director General of ESA, Jan Woerner, on that case - and - wonder - he got back to me by E-Mail today, "reassuring me that he will go after it"...

HERE's an updated Link to my screenshot (below FLICKR, in my old post) from my submitted contribution on the ESA blog -- that never got published:

FS3 wrote:I've tried to get into a conversation on ESA, coming up with some facts - but it wasn't even published . This chuzpah will be regarded as a personal attack on FS3 and on all tax payers of the EU: 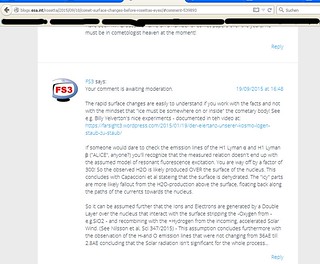 ...It seems that the only "public interest" of ESA lies through their funding with tax money.

But if those - who are forced to pay for those boozos - want to discuss some of their publicly funded works, they are blocked.

Hey, ESA is deliberately misleading the public and are wasting taxes in trying to catch a red elephant under the table - that isn't even there.

They can't get past the ice issue even when there is no evidence of ice:

“These spectacular changes are proceeding extremely rapidly, with the rims of the features expanding by a few tens of centimetres per hour. This highlights the complexity of the physical processes involved,” adds Olivier.

The sublimation of volatile species is clearly an important factor, as colour images of this region reveal the signature of exposed ice on some of the rims of the newly-formed surface features. The rapid rate of expansion is unexpected, however: models of sunlight-driven sublimation would predict erosion rates of just a few centimetres per hour, and thus the scientists believe that additional mechanisms are required to explain the observations.

A simple possibility is that the surface material is very weak, allowing for more rapid erosion, but it is also possible that the crystallisation of amorphous ice or the destabilisation of so-called ‘clathrates’ (a lattice of one kind of molecule containing other molecules) could liberate energy and thus drive the expansion of the features at faster speeds."


A small additional hint for "LaSuisse1", who was elaborating lots of arguments about "spectroscopy" on the hypothetical 'outgassing' from nowhere-to-be-found-inside-hidden-Water:

If you focus your spectrograph onto a house in your neighborhood where some guy is watering the lawn in front of that house, and the hose-nozzle shows towards your point of observation - you may come to the 'definite' scientific conclusion that his house is made of water...

Finally, let me share with you wonderful folks a pic from my blog, that I have made lately:

Grid-free 2D plasma simulations of the complex interaction between the solar wind and small, near-Earth asteroids
https://ntrs.nasa.gov/archive/nasa/casi ... 011018.pdf
In order to change an existing paradigm you do not struggle to try and change the problematic model. You create a new model and make the old one obsolete. -Buckminster Fuller
Top
Locked
800 posts

Users browsing this forum: No registered users and 21 guests