New threads (topics) in the Thunderblogs/Multimedia forum are only to be initiated by Forum Administrators. This is the place for users to comment on or discuss aspects of any individual Thunderblog or Thunderbolts multimedia post.

In an Electric Universe x-ray and radio astronomies are very important; x-ray because it reveals discharge activity that produces x-rays; and radio because it traces the cosmic power transmission lines in deep space through the polarization of radio waves from electrons spiralling in a magnetic field — known as ‘synchrotron radiation.’ ... [More...]
"Those who fail to think outside the square will always be confined within it" - Dave Smith 2007
Please visit PlasmaResources
Please visit Thunderblogs
Please visit ColumbiaDisaster
Top

This site has some nice compilations of several cosmological entities ranging from stars to galaxies.
http://www.solstation.com/index.html

http://www.solstation.com/x-objects.htm is one of those places 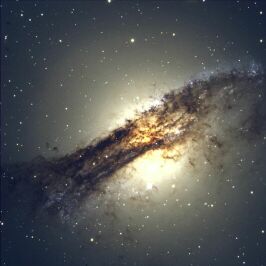 Centaurus A is a very large and peculiar
galaxy, with a supermassive central black
hole and a pair of radio and x-ray bright
jets. It appears to be a giant elliptical
that has recently merged with a barred
spiral neighbor 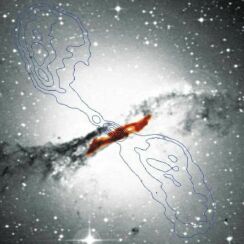 Some of the dust inside Centaurus A maps
out what appears to be a barred spiral
galaxy, which has recently merged with its
giant elliptical host and is feeding gas
into the host's central hole to produce
bi-polar jets that are bright in radio
wavelengths 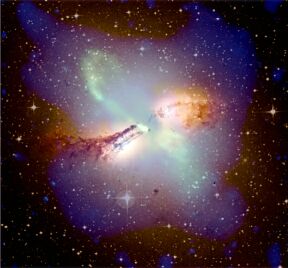 X-ray, radio, and optical images suggest
that the galaxy is in tremendous turmoil
with energetic arcs and jets after merging
with the barred spiral some 100 million
years ago 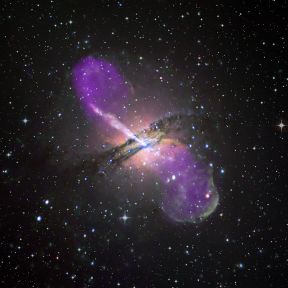 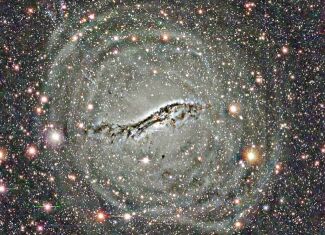 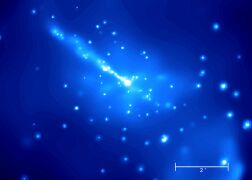 Blasting from a black hole with as much as
a billion Solar-masses, one jet travels
30,000 light-years in this image, among
neutron stars and black holes that are x-ray
bright from accreting material from companion
stars 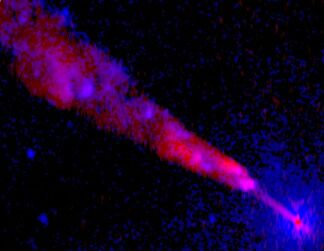 The inner 4,000 light-years of a jet
can be seen to erupt from the
galaxy's core at the lower right to
produce more x-rays when it collides
with denser gas at the upper left

Have fun!
The illusion from which we are seeking to extricate ourselves is not that constituted by the realm of space and time, but that which comes from failing to know that realm from the standpoint of a higher vision. -L.H.
Top

In an Electric Universe x-ray and radio astronomies are very important; x-ray because it reveals discharge activity that produces x-rays; and radio because it traces the cosmic power transmission lines in deep space through the polarization of radio waves from electrons spiralling in a magnetic field — known as ‘synchrotron radiation.’ ... [More...]

I still think that Wal missed an opportunity by not including the most recent results...

(Galaxies formed along filaments like beads on a string!)
http://digg.com/space/Galaxies_formed_a ... n_a_string

A good match to the EU view, in line with plasma physicist Peratt's independent investigations of plasma structure / implications for astrophysical plasmas...

Cheers,
~Michael Gmirkin
"The purpose of science is to investigate the unexplained, not to explain the uninvestigated." ~Dr. Stephen Rorke
"For every PhD there is an equal and opposite PhD." ~Gibson's law
Top
Locked
3 posts • Page 1 of 1