Images involving the Cydonia region on Mars were first observed in images from the Viking probe in 1976. One item seen in those images appeared to be a megalithic structure resembling a human face and another a five-sided pyramid like the Chrysler emblem and the familiar face-on-Mars image was seen on tabloids. These were high altitude, low resolution images and NASA's official position that the images showed natural formations didn't seem totally unreasonable in light of the fact that the standard vision of our solar system's history does not allow for Mars ever having been habitable: 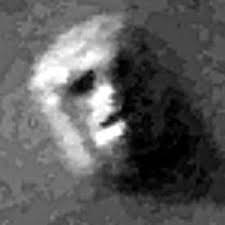 Nonetheless there was intense pressure on NASA to provide higher resolution images and such began to appear in the late 90s, including these images of the face megalith and the five-sided pyramid:

In the case of the higher res image of the face image, what you see is what you'd expect logically. There's no way to build something like that (2.5 miles or thereabouts top to bottom) by carving blocks. You pile stones into the shape you want and then pour some hard facing substance over it; what you see is that this facing is weathered on the left/windward side and is falling away in slabs on the right/leeward side. Many features such as the left eye, nostrils, lips etc. are visible and there is the fact that Mother Nature does not do straight lines or Bezier curves on a two or three mile scale. The curve of the helmet or headdress can be constructed with Corel or any other software package offering Bezier curves with one or two fulcrum points.

Nor are such images limited to one region of Mars. Later images have included an astonishing assortment of evidence that the place used to be inhabited. Images from a press conference which Dr. Tom Van Flandern conducted on the subject in 01 are available:

and these include a couple of other face images meant to be seen from off planet as well as what appear to be villages with terracing and rectangular structures: Near as I can tell, NASA and the JPL are about evenly divided on these topics; about half of them are willing to believe their eyes as I am and the other half are still in denial particularly since standard theories do not allow for Mars ever having been habitable and it would have to be habitable for these things to get built; nobody could build on this sort of a scale with spacesuits on. By standard theories, Mars would always have been too far from the sun, too cold, and too small to hold a breathable atmosphere via gravity.
Top

Another pyramid from Cydonia region:

Regions of Mars which appear to have been settled:

Then again, there are the Spirit probe images, and the strange case of PIA04995:

This has had Russians and others claiming that the entire image is faked and likely taken in Arizona or Uzbekistan somewhere:

I've said this before, a conspiracy theory should be your last choice for an explanation, when nothing else is left; this case however qualifies....

Conspiracy theories are basically opinions, everybody is entitled to his/her own; here is mine for PIA04995:

I suspect that somewhere back four or five years prior to the Spirit probe, some astronaut or other NASA or JPL employee who had been diagnosed with cancer or something like that had asked for and gotten a one-way ticket up there, and was out investigating the area seen in the lower right corner of PIA04995. This person then called in the coordinates of an area he/she found particularly interesting, and then the Spirit probe was put down on those coordinates but nobody remembered why or nobody bothered to tell the GS 7 or 9 yuppie whose job it was to examine such images. Nobody bothered to look closely at the tiff image and NASA then released all three images to the public. Of course, at that point, it was too late and the whole world had its own copies.

Other bits and pieces of PIA04995 showing things which are definitely not just rocks and sand:

Bearfabrique page on the topic:

I suspect that somewhere back four or five years prior to the Spirit probe, some astronaut or other NASA or JPL employee who had been diagnosed with cancer or something like that had asked for and gotten a one-way ticket up there

This wouldn't work. Mars hasn't been close to the Earth for a while, so it would be one long, radiation soaked trip, culminating in a punishing re-entry. Even if you were super fit you'd still be in a poor state by the time you reached the Red Planet.

Dunno about the ancient mechanical debris either, just as long as they don't find a mass driver and three legged fighting machines we should be alright.

tholden wrote:Mother Nature does not do straight lines ... on a two or three mile scale.

Not trying to be contrarian here, just scientific. Falsifiability, and all that loveliness.

Mother Nature does appear to be capable of essentially straight lines.

tholden wrote:Other bits and pieces of PIA04995 showing things which are definitely not just rocks and sand:

Again, please support your bare assertion. I see nothign other than rocks littered over reddish soil. The images are FAR too fuzzy to make any concrete claims about them. But, to my eye they look like a random assortment of rocks. More or less garden variety.

Have to go a lot further than bare assertion if you're going to make a firm claim. Which is different, of course, from discussing a theory, hypothetically. IE, it's find to discuss a hypothesis and note it as such, but to make a concrete statement that "these aren't rocks," requires more.

Rocks and more rocks. What exactly are you claiming we're seeing here, and on what basis? Again, these images are FAR too blurry to make out significant details for identification.

I don't think these meet the burden of proof or even plausibility of being other than rocks scattered on a dusty plain.

Site with many new images: