> Horus (over at the Graham Hancock Forum) writes (regarding the hieroglyphic at Dendera):
> It is a story written in hieroglyphs (...) which very clearly recount the Heliopolitan creation myth of the birth of Atum. http://www.grahamhancock.com/phorum/rea ... 332259&v=f

The Birth of the Atum...

From Wikipedia:
"Atum was a self-created deity, the first being to emerge from the darkness and endless watery abyss that existed before creation. A product of the energy and matter contained in this chaos..."

Translation: The Plasmoid is a spontaneous, self-created, plasma formation that emerges from the chaos and darkness of the Z-Pinch at the end of the Birkland Current. A product of the positive ions, neutral atoms, negative electrons and electromagnetic forces contained in the chaos of the Z-Pinch.

Interesting... The more hieroglyphic stories/references I'm shown, the more clarity they bring to the picture...

I love this stuff (thank you Horus)...

-Armand
"If you want to understand the Lost Technology of Ancient Egypt, study
(Electrical) Storms, Soap Bubbles and Solitons." - Cashus the Giant
Top

Bill, if you'd like to have a chat room discussion on this theory, or any other favorite theory, see http://thunderbolts.info/forum/phpBB3/v ... 10&t=15083.
Top

Armand, here is the best source I know for interpretations of hieroglyphics:
http://www.gks.uk.com/about/
Gary Gilligan sees the ancient stuff as depictions of events in the sky.
Cheers,
Mo
Top I believe a pattern is beginning to emerge from the raw data - of a 'new paradigm in physics'...

A paradigm I believe the Ancient Egyptians (and other Ancient cultures) were well aware of... We do live in interesting times. Cheers...

-Armand
"If you want to understand the Lost Technology of Ancient Egypt, study
(Electrical) Storms, Soap Bubbles and Solitons." - Cashus the Giant
Top

On holiday, but just watched a tv documentary called “Times Scanners-Egyption Pyramids”, and thought of this thread.
Their timelines and archeological theories are probably flawed, but the hi-tech 3D spatial scanning of (what They think are the first) five pyramids was fascinating.

The “Stepped” (shades of Pre-dynastic Sumerian ziggurats), the Meidum, the “Bent”,
the ”Red” (glossed over), and the Great Pyramid.

[Just a subjective observation here: have spent some time alone atop the GP and the energy flow is quite remarkable. (Also, there are No inscriptions inside the GP, other than one hotly contested possible forgery, which is Totally out of character for dynastic “tombs”).]

The ‘scanning’ they do on the structures is eye-opening. In fact one French egyptologisté they brought along for color was absolutely speechless ! 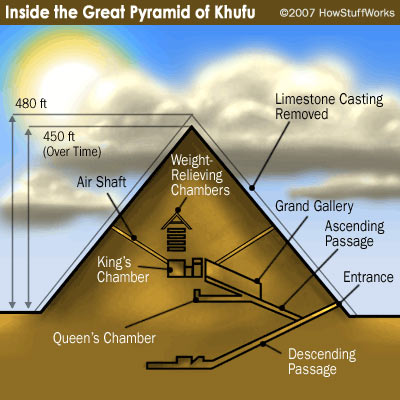 
Upon examination of the CGI point-cloud matrix, it was determined that the so-called sarcophagus is not under the SW face as previously calculated, but is instead on the SE diagonal of the structure, and so in alignment with the 3 pyramids of Giza.
[Rumor has it that there was a similar granite ‘box’ in the queen’s chamber, which has been removed]
http://www.gizapyramid.com/history.htm

Lately there've been a number of theories in the literatures concerning the energetic function(s) of the GP, but it has always struck this rank amateur with the diagrams, that the connected internal cavities resemble some kind of
resonator- waveguide- harmonic capacitor- antenna ~system ,
and this particular engineer’s investigations did nothing to dispel the impression.

Thanks for the heads up on the PBS video (I have just set my DVR)...

I have been to the Great Pyramid many times, but I am sorry to say I have yet to experience the top...

I did turn the lights on one morning in the descending passageway (that leads to the pit) - it was very spooky - climbing backwards (FYI - it is much easier to climb down these narrow tunnels backwards - but watch your head) alone down that completely dark passageway at 4AM - with only a penlight.

I've also had the opportunity to tone (create vocal overtones, like Ohm'ing) in the Kings Chamber many times.

On time in particular, during an off-hours private visit, I was tasked to be the last person to leave the pyramid (our tour leader wanted me to ensure that everyone in the group had actually left the pyramid - I was to leave no one behind). Just before leaving the Kings Chamber, I stood with my back to the entrance and belted out one big tone for about 2 minutes (my favorite tone is the U sound - when you hit that overtone between the E and the U tones). The people at the bottom of the Grand Gallery told me later that the tone reverberated like a cathedral pipe organ throughout the entire pyramid.

I felt the chamber ring like a bell for the next few minutes, after I stopped toning - it was way cool.

Initiation in the Great Pyramid

Another thing I have been privileged to do is tone over the granite box while the members of my group lay in it. I quickly found a 'sweet spot' where I could tilt my head back a little while toning and get the tone/sound to build like a resonate tank circuit - louder and louder and louder...

Those who have experienced the increasing vibration in the box told me it was very energetic...
(I could never be in it - and do it - at the same time; so I cannot speak from experience)

I my opinion, the Great Pyramid is definitely some sort of energy machine...

I only wish I could have seen it before they removed the white casing stones and capstone.

The Great Pyramid of Egypt

I can only guess how wonderful it must have been to see...

Me with the Ringing Obelisk at Karnak (1997)

"If you want to understand the Lost Technology of Ancient Egypt, study
(Electrical) Storms, Soap Bubbles and Solitons." - Cashus the Giant
Top

I still have an old tape recording of an R+C 'toning' session in the Kings Chamber - from many years ago.
I can empathise with your group's experiences.

I'm not yet convinced of any 'initiatory' uses for the room, or the so called 'sarcophagus', but always a walking question mark.

Back to the Dendera Light. The story so far...

"If you want to understand the Lost Technology of Ancient Egypt, study
(Electrical) Storms, Soap Bubbles and Solitons." - Cashus the Giant
Top

Ever thought about the necklace as a Pulvermacher chain powered by body sweat ? Similar to Ann Makosinski's flashlight where the sistrums cross struts could be the glowing wires ? Well, i would use the staff as grounding and the Ankh as teaser to proove my godlike powers and the "flashlight" when visting the ancestors in the graves...

However, the Dendera pictures are not plasma bulbs. There is not only Djed, but also the outreaching arms. Those are a glyph for Ka. Ka is part of the soul. Those pictures are of pure religious/philosophical nature. The left and right text of the double bulb picture mention Ba and Ka too. Blue lotus is a drug. For me those pictures are about mind-expanding and/or soothsaying rituals.
Top

The Great Pyramid was clearly surveyed with early forms of optical surveying instruments that we could call proto-theodolites. This is all described at great length in my book, and I urge anyone interested in the pyramids to read all about it.

I have proved from archaeological evidence that the technology for surveying the Great Pyramid existed at least as far back as 3300 BC, and doubtless earlier than that, since we can hardly presume that the ivory knife handle was the first such object to exist, as it is already highly sophisticated and suggests a long-standing tradition.

(for history of "pre-dynastic" conquest of Upper Egypt by mesopotamian "Followers of Horus", see Legend- Genesis of Civilization, by
David Rohl- University College London; the hardcover version of which is an absolutely wonderful volume full of maps, photos, plates, photos, refs, side notes and privileged access to museum vaults of the world that the popular authors would die for... )

Marking the One Year Anniversary of My First Post...

As my Dad would say, "Time does fly when you're having fun..."
"If you want to understand the Lost Technology of Ancient Egypt, study
(Electrical) Storms, Soap Bubbles and Solitons." - Cashus the Giant
Top

What are you having fun with? Is that it in the photo? Anything interesting yet?
Top

Found some 'Long Lost' photos from my early 'was' scepter 'Tuning Fork' experiments.

These were taken back in 1997 (3 years before the discovery of the 'Electromagnetic Buzzer' solution).

In these photos you see the basic, simple, components I used in my first 'Egyptian Power Source' experiments...

I was curious to see if anything interesting would happen if you put these components together.

That was the first time I saw the components 'chop' the DC (i.e. Direct Current) of the battery pack into AC (i.e. Alternating Current) - Notice the square wave signal displayed on the oscilloscope in the foreground.

This is my original diagram from my notes...

Here you see my first 'double tube' configuration (with its pair of 'glowing snakes') being powered by the AC from the tuning fork power supply.

It was just a pair of inch long neon bulbs, but it was a start...
"If you want to understand the Lost Technology of Ancient Egypt, study
(Electrical) Storms, Soap Bubbles and Solitons." - Cashus the Giant
Top

Don't let it fade to the nether pages, keep the updates coming!

That the Ancient Egyptians did have some understanding of electricity from various sources is evident from the "batteries" to their use of the Electric catfish in medical treatments. (LOL! It's not a great leap that at some point there was a discharge seen to/from those wearing metal jewelry).
Top
Locked
83 posts